Mindy Kaling on Jimmy Kimmel Live!: "It Takes a Lot of Effort to Look Like a Normal/Chubby Woman" 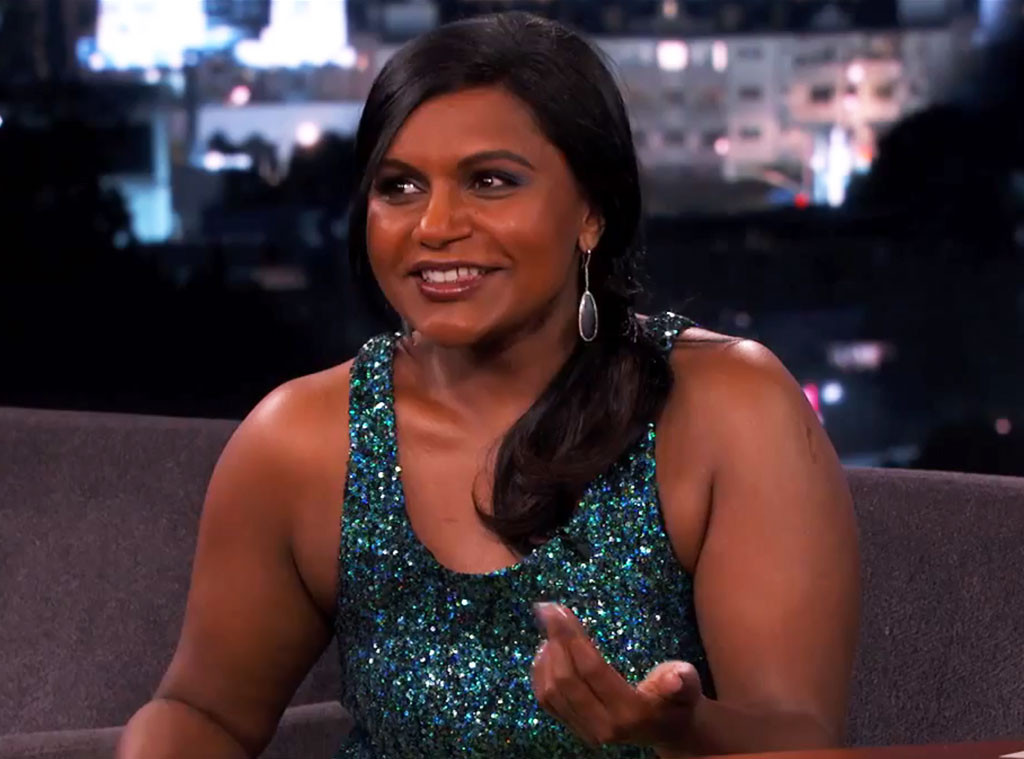 Mindy Kaling never set out to be the poster child for non-size-zeros.

The Mindy Project star was recently praised for telling Vogue she doesn't "want to be skinny," but Kaling didn't find the admission all that revelatory. "People were like, 'That's so great that you said it,' and I didn't think that was so weird. Every woman I know feels that way," she said on ABC's Jimmy Kimmel Live! Monday. Kaling then cited her Topshop look at PaleyFest as an example of her feedback.

"I wear these outfits and stuff. I'm not skinny, but I'm an actor, which...that never happens in the world of regular-sized people and actresses," the Emmy-nominated TV writer said. "I also am the recipient of a lot of backhanded compliments about it, where people are like, 'It's so nice that Mindy Kaling doesn't feel she needs to subscribe to the ideals of beauty that other people do.' And I'm like, 'I do subscribe!' They're like, 'It's so refreshing that Mindy feels comfortable to let herself go and be a fat sea monster.' By the way, I like run and work out. It takes a lot of effort to look like a normal/chubby woman. The way they talk about it, [it's] like, 'She's a pioneer because she's glued to her sofa.'"

VIDEO: Will Reese Witherspoon ever appear on The Mindy Project?

So why did Kaling decide to show "a little midriff" at PaleyFest? "Unless you have problems, for most women that's a nice little area right under your bra," she explained. "Some people were pretty mean about it, but then some people were like, 'She's just so courageous!' Aren't surgeons courageous?"

Kaling then asked host Jimmy Kimmel, "Do you feel any of that stuff as a man?"

NEWS: Why The Mindy Project is the best comedy you're not watching

All jokes aside, Kaling is happy to give her viewers body confidence. "On my show, I date guys...if that makes girls feel like, 'Oh you can be normal and get married and having sex'—which largely TV [says] you can't do—then great," said the former Office star. "But you also don't want to be the face of Stay Puft marshmallows. It's hard when you're a narcissistic vain person and you wanna be a role model."

On The Mindy Project, Kaling has kissed everyone from guest star James Franco to co-star Chris Mesina. "It is the single best thing about my job," she said. "I feel sorry for you—you can't organically kiss the actresses who are on your show. I have the best deal worked out in the world. I kiss handsome actors and then they leave so I don't have to find out about March Madness and all that crap that I don't care about. They come on the show, we smooch, and I find that largely guys are psyched to be able to do that when they're acting. They're like, 'Oh, cool. My wife can't get mad at me. This is paying the bills.'" She then jokingly told the audience, "I'm not a prostitute, by the way. I'm a pimp. I'm a human trafficker of men, handsome men. It's okay, they don't get human trafficked that much."