Once Upon a Time Bosses Reveal Their Reasons for Killing Off [Spoiler]! Plus, What's Next for Emma's Love Life? 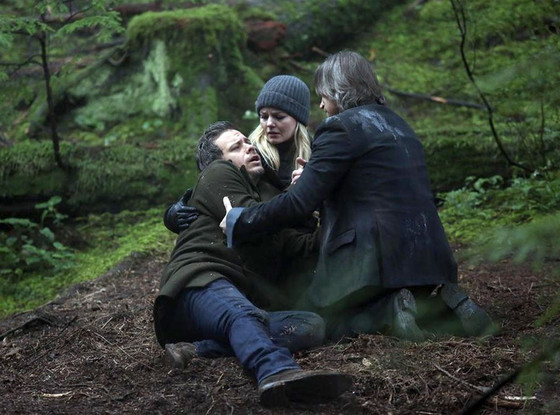 Warning: We're about to address some major spoilers that happened on this Sunday's episode of Once Upon a Time. If you have not watched the episode, or don't want to know what's coming up next. Click your magic slippers together and get the heck out of here!

Sunday's heartbreaking episode of Once Upon a Time has brought forth a whole lot of tears from their magical fandom. In a desperate attempt to resurrect his father Rumplestiltskin (Robert Carlyle) from the afterlife, Neal (Michael Raymond-James) sacrificed his own life to take Rumple's place. With Neal's last breaths, he returned Emma's (Jennifer Morrison) necklace and asked the mother of his child to find Tallahassee on her own. His dying wish was for Emma to tell Henry (Jared Gilmore) that his father left this world as a good man.

However, now that we've processed the shocking and unexpected death of Neal we're left with an endless amount of questions. To help you fill you in on what's next for our spellbinding drama and why Neal is gone for good, we chatted with co-creators Adam Horowitz and Eddy Kitsis and they spilled secrets that you can't get anywhere else!

SCOOP: Wonderland canceled: Will the actors move to Once Upon a Time?

Thanks for causing the entire Once Upon a Time fandom to ugly-cry last night. Why did you decide to kill off Neal?
Eddy Kitsis: Well, you know, it was part of the larger story we've been trying to tell with all of our characters and the family that is Once Upon a Time.

Adam Horowitz: What we were really telling, when you look at the story of Neal and Emma and his father Rumplestiltskin, is when he was a young boy, he tried to get his dad off magic and out of his evil ways. He always felt his dad was not a hero. And then as we showed you in the winter finale, those two actually came together, and the father actually sacrificed himself for his son. What we liked was the idea of history repeating itself and Neal going down the same path as his father. He was just as obsessive to get to his own family, and then realizing that mistake and having the father repeating the same heroic thing for his son, as his father did for him. That's the long way of saying it.

READ: Once Upon a Time wants to do Anna and Elsa from Frozen!

How difficult was it to keep this shocking death a secret?
AH: It's hard and the truth is that in this day and age, if fans want to find out anything, they probably will, and we're glad it played as a surprise to most people. But more importantly than just keeping secrets or surprises, we were very happy that we were able to work with the brilliant Michael Raymond-James. He did such amazing work and we're happy that so many people got to share in an extremely emotional episode.

EK: For us, of course it's also hard because we love that character. We loved writing for Michael because he's such a talented actor, so it was a very hard decision for us because we really loved watching him act.

AH: We've always said from day one, magic has a price, and you saw it. Rumple could not just come back and Neal gets out of it.

WATCH: Once Upon a Time: Can you spot the Wicked Witch of the West hiding in Storybrooke? 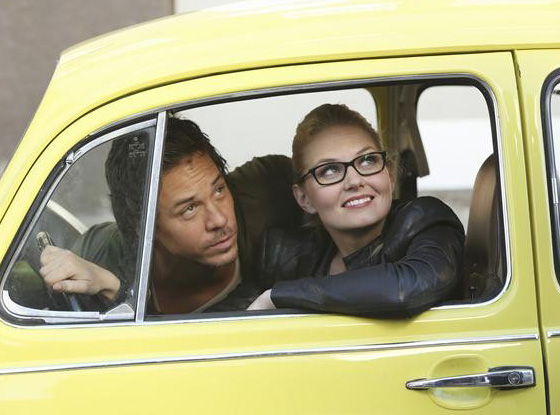 How is Neal's death going to affect Emma in these next few episodes?
EK: I think that it is going to make Emma more determined

AH: I think for Emma, she was already hell-bent on defeating the witch and figuring what was going out with this curse but now it's personal. Now, there is a fire that has been lit, the stakes have been raised to a new level, for her and she's not going to stop until she succeeds or dies trying.

EK: I also think that for Emma this is another reason to maybe not want to live in Storybrooke anymore. It's a lot easier to send your kid to school then to have to be worried that there is a wicked witch who might turn him into a monkey.

MORE: Once Upon a Time Scoop: 15 Enchanted Answers

Does this mean that the road for Emma and Hook together is wide open?
AH: Their relationship is continuing to develop and grow, but right now, both of them are embroiled in something beyond romance. So while they're dealing with any feelings they may or may not have for one another, the stakes are raised so high now.

EK: I also think that Emma right from the beginning was somebody who has walls up and, really, Henry is the only one who has truly penetrated that. Even in the last year, when the fake memories allowed her to fall in love, the guy turned out to be a flying monkey. And now this experience over this weekend just made her walls go up even higher.

Once Upon a Time airs Sundays at 8 p.m. on ABC.

PHOTOS: Renewed, canceled or TBD? Find out where your favorite shows stand

TAGS/ Watch With Kristin , TV , Top Stories , Exclusives , Once Upon A Time
GET POP CULTURED!
*Email entered incorrectly. Please try again.
By subscribing to our newsletter you agree to the Privacy Policy and Terms of Use
Daily
Weekly