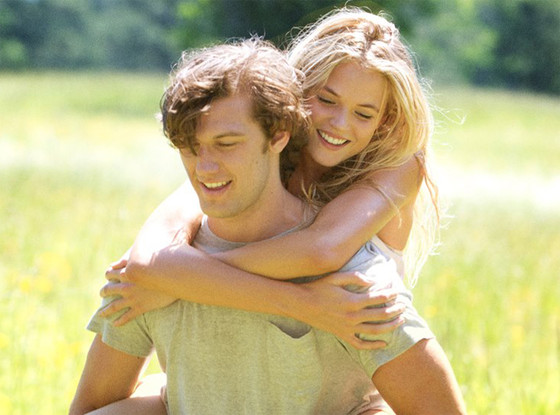 Today is Valentine's Day and you know what the means, right? Romance movies are flooding the theaters!

Released today, Alex Pettyfer and Gabriella Wilde costar in Endless Love, the 2014 remake of the original 1981 film starring Brooke Shields. The duo play teen lovers whose passionate affair goes up against disapproving parents who try to tear the couple apart.

So are critics swooning over the romantic love story this Valentine's Day? Or would they rather stay home single? Here's our review roundup of Endless Love.

• In a review titled "Another '80s remake that's not worth revisiting," Washington Post writer Stephanie Merry begins her review with, "When [director] Franco Zeffirelli brought Scott Spencer's novel Endless Love to the big screen in 1981, the result was a corny, poorly received teen romance starring Brooke Shields. More than three decades later, Endless Love is back, and what does this new version offer? A different set of actors, a Valentine's Day release date and kissing. Lots of kissing. Kissing in place of character development and dialogue, even entire kissing montages where a meaningful plot should be."

• The New York Daily News' Elizabeth Weitzman calls Pettyfer "laughably miscast" and Wilde "beautiful, but bland," adding, "If you're looking for a Valentine's Day date, this version is probably a better choice than the uncomfortably swoony original would have been. You might be bored, but at least you won't be embarrassed." Ouch!

• Keeping with the better but still "bland" theme, The Hollywood Reporter's Todd McCarthy calls the remake a "little better" than the original, adding, "The leads are at least livelier than were their predecessors in these roles all those years ago, although they hardly seem to be burning with adolescent desire and carnality. While Wilde, at 24, still passes plausibly for a teen here (this was filmed before the actress became a mother), Pettyfer, the hunk from Magic Mike, looks well into his twenties and decidedly more mature than his costar, even if he's actually a year younger."

• The New York Times' Manohla Dargis also took issue with Pettyer and Wilde's ages, writing, "Directed by Shana Feste (Country Strong), this new Endless Love doesn't have enough going on to make it memorably terrible: Banality is its gravest sin. Ms. Wilde and Mr. Pettyfer are very pretty (both have worked as models), and they're certainly pleasant to look at, even if they're also, often distractingly, too old for their roles."

• Los Angeles Times writer Betsy Sharkey agrees the best part of the film (for better or worse) is the visual aspect and not the storytelling. "Every time things between blue-collar David (Pettyfer) and pretty, privileged Jade (Wilde) get sticky—either kissy/gooey or teary/hurt-y—and the film could go deep, Endless morphs into music video territory. Director of photography Andrew Dunn has a field day with slow-mo kissing, dancing, hugging, swimming, gazing and running through verdant fields, gardens, parks and pastures on days and nights that are rain-drenched, wind-swept, sun-washed, moonlit."

• Entertainment Weekly gave the film a B rating. "Alex Pettyfer, who was one of the dancers in Magic Mike, knows how to smolder and be cool at the same time, and how to communicate what he's thinking without making a big show of it—a gift that can take you far in the movies," writes Owen Gielberman. "If the movie works at all (and I think it does), it's as a swoony love story threatened by a basic, cornball Oedipal drama. But for a film that's coming out on Valentine's Day, that more than passes as respectable."

TAGS/ Alex Pettyfer , Movies , , Top Stories
GET POP CULTURED!
*Email entered incorrectly. Please try again.
By subscribing to our newsletter you agree to the Privacy Policy and Terms of Use
Daily
Weekly