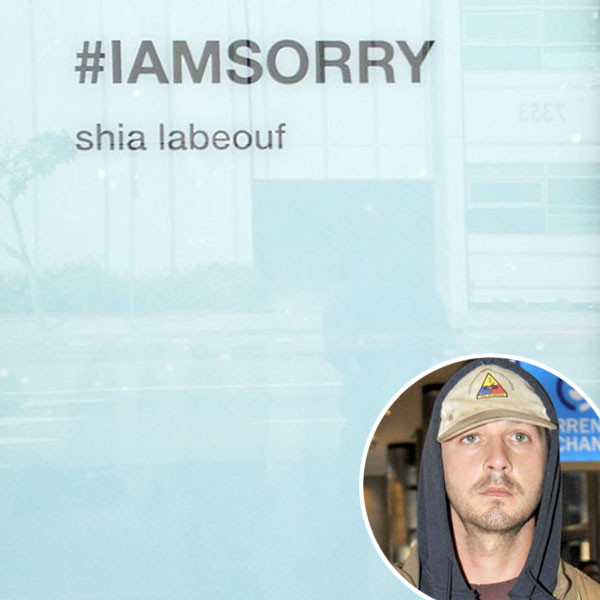 Shia LaBeouf is sitting in a room in Los Angeles with a paper bag over his head. It's part of his new #IAMSORRY art collaboration with Finnish performance artist Nastja Säde Rönkkö and a meta-modernist named Turner. And it's...weird, to say the very least.

We'll have a firsthand account of what happens when you enter the exhibit a little bit later, but the gist of it goes like this:

You are directed into a room where a woman is standing behind a table that has a bunch of objects on it, and she asks you to pick one. A pink ukulele, a Transformers toy, pieces of paper with tweets about Shia written on them, a whip, and a big bottle of Jack Daniels are just some of the objects you can choose from. It seems like a lot of the props are supposed to symbolize his acting career.

WATCH: Check out Shia LaBeouf in the latest Nymphomaniac trailer

After you pick an object, you are then told to go behind a black curtain where Shia is sitting at a small table with a bag over his head. The paper bag reads, you guessed it, "I am not famous anymore."

You sit across from him. He doesn't speak to you, he barely smiles and he apparently looks at you the whole time.

Most people have noted that Shia either cries in front of them (single tears) or they can tell he has been crying before they walked into the room.

That's it. Yeah, a lot of stuff to take in. So let's get right to our burning questions about #IAMSORRY:

READ: Bill Murray explains why Shia is having so many problems lately

3. No, seriously. What is happening right now?

5. When Shia cries, are the tears falling over or under the paper bag?

6. Which artist will Shia copy next? (Our vote is for The Naked Cowboy.)

7. Since he has a paper bag over his head, do we know if it's really him under there? That we have an answer to, courtesy of Buzzfeed's Mike Spohr.

READ: Here is Shia without a paper bag over his head

8. What happened to The Louis Stevens Experience? Is this it?

9. Does Shia plan on seeing Transformers 4?

10. Is anyone from the Transformers franchise ever going to make another movie again? (We have a lot of Transformer-related questions.)

11. If you take the right combination of objects into the room with Shia, does the spell break and will he go back to just making movies and being a normal dude?

That last question is the one we want answered as soon as possible. In the meantime, if you are in the Los Angeles area, come by and sit across from Shia LaBeouf and watch him cry. Or you can try and make him laugh. That choice is up to you. We suggest making him laugh, because it seems like he needs it right now.

TAGS/ Shia LaBeouf , Top Stories , E! Loves
GET POP CULTURED!
*Email entered incorrectly. Please try again.
By subscribing to our newsletter you agree to the Privacy Policy and Terms of Use
Daily
Weekly