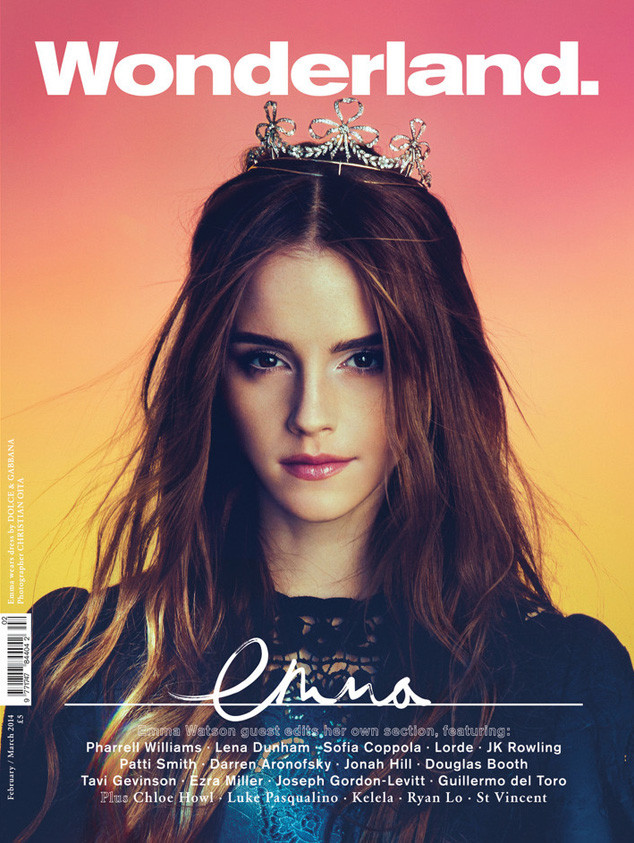 Emma Watson is a lot of things, but impulsive isn't one of them.

The Noah actress guest edited her own section in Wonderland magazine's February 2014 issue, which also features Watson on its cover. In the accompanying interview, Watson tells Derek Blasberg that she's never had any desire to go off the rails and do something crazy like "get drunk and get tattoo."

"I love tattoos. But I love them on other people," the 23-year-old Brown University senior says. "In fact, I have a Pinterest account and a whole board of tattoos that I like—but I would never want one for myself. I don't think I could pull it off. My own self-image would not allow it."

NEWS: Emma Watson is an artist—see her supposed self-portrait

Blasberg points out that Watson is "not as puritanical" as she often seems. "I feel like I've been given a lot of credit where it isn't due that I don't like to party," she says. "The truth is that I'm genuinely a shy, socially awkward, introverted person. At a big party, I'm like Bambie in the headlights. It's too much stimulation for me, which is why I end up going to the bathroom! I need time outs! You've seen me at parties, Derek. I get anxious. I'm terrible at small talk and I have a ridiculously short attention span."

"I feel a pressure when I'm meeting new people because I'm aware of their expectations," Watson adds. "That makes socializing difficult. Which isn't to say that when I'm in a small group and around my friends, I don't love to dance and be extroverted. I am just extremely self-conscious in public."

Watson has shocked fans before, however, like when she got a pixie cut in August 2010. Still, she says, "It wasn't unexpected to me. I had been crafting it in my mind for years. So, when the time came, I went ahead and did it." Watson has since grown her hair out, but she still misses her old look. "To be honest, I felt more myself with that haircut. I felt bold, and it felt empowering because it was my choice. It felt sexy, too. Maybe it was the bare neck, but for some reason I felt super, super sexy."

"The minute I get pregnant, the first thing I'm going to do is cut my hair off because I know I won't be working for a time," the Harry Potter and the Deathly Hallows – Part 2 star says. "If I wasn't an actress, I'd keep it that way. I could wash it in the sink and shake it out like a dog. It's so low maintenance!"

Of course, Watson isn't planning to get pregnant anytime soon. The British beauty graduates this spring, and she's currently exploring other career options outside the worlds of film and fashion.

"This year, I'm turning 24. A lot of my friends are really worried about turning 24, but I like that I'm getting older. In a way, I started out like this old lady, and now I feel like my age is catching up with me. And I'm excited by all these new things for me to do. I feel like I have so much more to accomplish as an actress. I'd love to try theater and that's a whole other thing. But when I finish my degree, I will have a lot more time to pursue other passions, and I want to figure out what those will be," she says. "I love having something completely unrelated to the film industry. I want to find something that will let me use my brain in another way. I like connecting people who aren't part of that world too."