Parks and Recreation: A Farewell to Rashida Jones and Rob Lowe 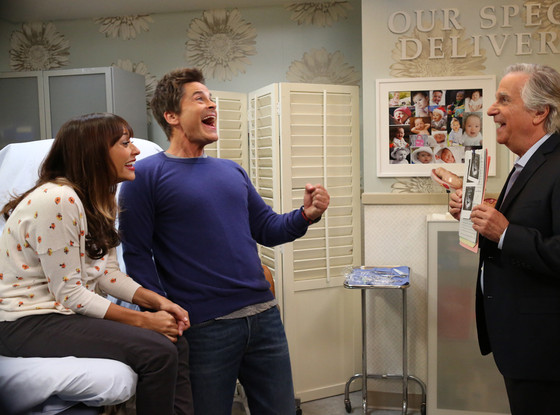 Tonight, Parks and Recreation says goodbye to Rob Lowe and Rashida Jones. And it is literally killing us inside.

"It feels like somebody took my heart and dropped it into a bucket of boiling tears. And at the same time, somebody else is hitting my soul in the crotch, with a frozen sledge hammer. And then a third guy walks in and starts punching me in the grief bone."

READ: 100 Reasons We Will Always and Forever Love Parks and Recreation

Our grief bone and our soul's crotch are certainly hurting. But we thought we'd celebrate and mourn Rob and Rashida's exit at the same time with a little ode to Chris and Ann by listing all the reasons we will miss those two crazy kids:

3. She doesn't always say the right things, but at least it's funny.

4. She put glitter in Tom's lotion as payback.

5. Leslie promised to help her in the very first episode, and that was the start of their epic friendship.

6. She understands the importance of food.

NEWS: NBC boss says Parks and Rec will be back for seventh season

8. She dated Tom for a bit, which was kind of awesome.

9. Leslie would go gay for Ann in a heartbeat.

10. Ann and Ben have become so close, and we love their friendship.

11. Ann doesn't mind the weird requests she gets from Leslie.

12. Because Ann and Leslie forever.

1. One time he couldn't stop pooping, and he learned it's OK if the microchip gets compromised.

2. He's really in touch with his feelings, even if it sometimes got creepy.

3. Ann and Chris managed to make it work, even though she hates jogging.

6. This is how Chris dances.

7. Chris doesn't mind when pregnant Ann yells at him.

WATCH: Parks and Rec Finale Will Have a "Live Birth"?! Wait a Minute...

8. He's never lonely as long as he has himself!

9. Even though his body is perfect, he handles food poisoning just like everyone else.

10. Because Chris and Ann will be wonderful parents, even if we don't get to see it.

11. Because Ben and Chris make a great budget-slashing team.

12. He is the most supportive man on the planet.

13. Because Ben and Chris forever.

We could talk about why we'll miss Chris and Ann all damn day, but we're already getting all choked up so we'll stop here. The point is, Parks and Rec will be just fine without Rashida and Rob, but it will not be the same.

So long, you two beautiful humans. Don't stay away from Pawnee for too long, ya hear?

What will you miss most about Chris and Ann? Besides every little thing?