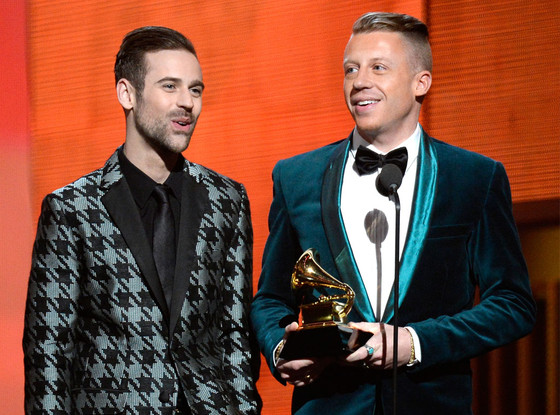 The music industry's biggest night was filled with skin, surprises and tons of high notes.

Daft Punk came away the biggest winner of the night, with a total of five awards. Trailing shortly behind was Macklemore & Ryan Lewis with an impressive four awards.

But unlike other awards shows, most of the trophies are passed out before the actual ceremony.

In fact, Cyndi Lauper announced a few early winners in a pre-telecast event in Los Angeles.

So who took home Grammy awards before the show aired?

Adele also earned a Grammy earlier in the night, but was not on hand to accept the coveted award.

"Wish I was there! Thank you for the grammy! (My 10th one! Whhaaa?) Have a wonderful night. I'm in bed, now feeling very restless x," the singer wrote on Twitter. 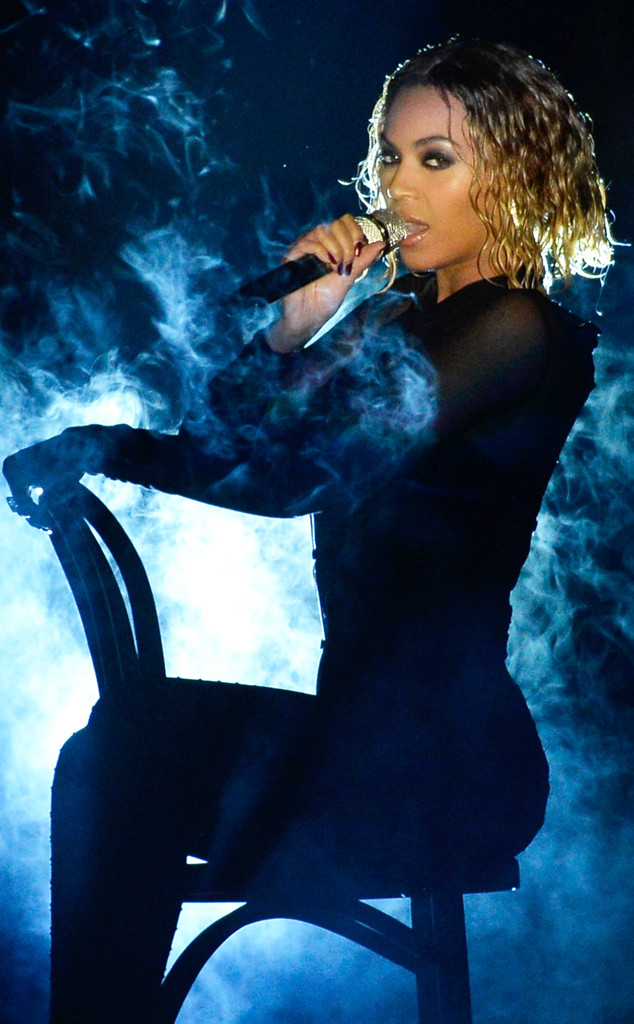 LL Cool J took on the role of host for the evening festivities, along with a slew of famous faces who presented throughout the night.

Beyoncé and Jay Z opened the show with a performance of their latest hit "Drunk in Love" and got almost everyone in the crowd on their feet.

To be fair, the music royalty set the bar really high considering they were the first to step on the stage and serenade the crowd.

Lorde rocked the house with a rousing rendition of her debut track, "Royals." The New Zealand native sported gothic-esque black lipstick and sang a decidedly understand version of the song.

Shortly after Hunter Hayes performed "Invisible," Daft Punk and Pharrell Williams earned the top honor for Best Pop Duo/Group Performance for their mega-hit "Get Lucky." The French duo accepted their award wearing their signature space helmets and let Williams do most, okay all, of the talking once on stage.

Next up on the long list of performances for the evening was none other than Katy Perry.

The singer put a spell on us when she twerked and gyrated on a witch's broom during her dance single, "Dark Horse."

John Mayer's ladylove looked sexier than ever showing off her flexible moves in a crop top. Hey now!

Robin Thicke was joined by Chicago for a medley of their biggest hits and even performed his hit "Blurred Lines" with the venerable band. 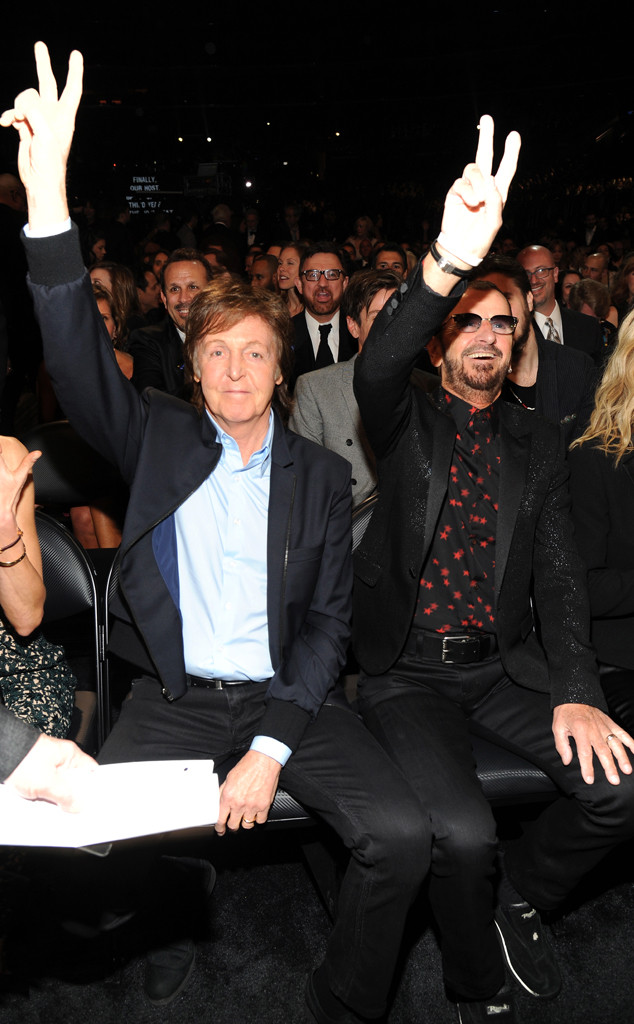 And while there were two sexy backup singers, everyone remained fully clothed throughout. Phew!

Shortly after, literally within seconds, Keith Urban and Gary Clark Jr. took the stage and jammed out a guitar-heavy duet.

John Legend serenaded the audience with his "All of Me" while his wife Chrissy Teigen looked on lovingly.

The song's music video made headlines when it featured the newlyweds getting hot and heavy.

Didn't get enough piano with Mr. Legend? Good, because Taylor Swift belted her latest heartbreak ballad "All Too Well." Everyone's attention went straight to her head-banging session in the middle of the song—she certainly whipped her hair back n' forth!

PHOTOS: Notable nominees at the 2014 Grammys 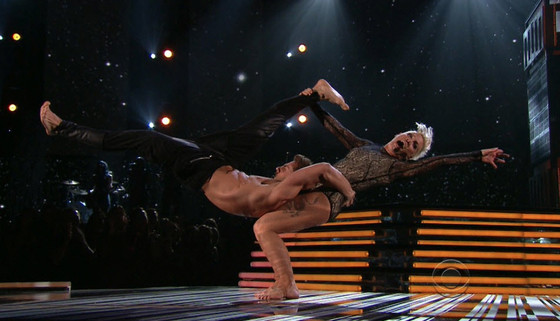 And then there was Pink's glorious gymnastics-heavy performance. The singer brought back her killer (and flexible) Cirque de Soleil-esque moves as she sung "Try" while suspended high above the crowd.

After a quick wardrobe change (she tossed on a black maxi skirt over her lace leopard), Fun.'s Nate Ruess joined her onstage to sing their hit duet, "Just Give Me a Reason."

Miguel and Ariana Grande then presented the trophy for Pop Solo Performance to Lorde for "Royals." The first-time Grammy winner looked startled, and albeit emotionless, as she heard her name be read.

Ringo Starr then performed and got the crowd clapping along to his single, "Photograph."

Jamie Foxx got up on stage to present the Best Rap Duo/Sung Collaboration and exclaimed, "Man, Blue Ivy's mom is hot!" Amen.

The award went to Jay and Justin Timberlake for their work on "Holy Grail." 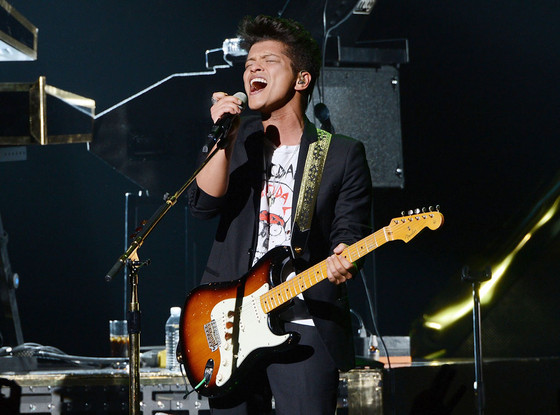 And in one of the strangest back-to-back performances of the night, Kendrick Lamar and Imagine Dragons turned up the heat in an energetic collaboration followed by Kacey Musgraves' "Follow Your Arrow."

Paul McCartney performed with his pal and former Beatles bandmate Ringo shortly thereafter—also, bravo to the Grammy's cameramen for panning in on Yoko Ono boogieing down from her seat!

Bruno Mars won for Unorthodox Jukebox for Best Pop Vocal Album—beating out some of the biggest names in the business.

He dedicated the album to his mother, who passed away over the summer.

Stevie Wonder joined in on the "Get Lucky" fun and sang with Pharrell and Daft Punk in a rare performance for the French duo. Daft Punk took home the award for Record of the Year. The trophy for Song of the Year went to "Royals" writers Lorde and Joel Little.

And in one of the more touching moments of the evening, Macklemore and Ryan Lewis performed "Same Love" with Madonna.

Together, along with Mary Lambert and Queen Latifah, the group married 33 couples who were lined up in the audience. Kleenex was needed for this tear-jerker!

The biggest award of the evening went to Daft Punk for Random Access Memories for Album of the Year.

And last, but certainly not least, Dave Grohl, Queens of the Stone Age, Lindsey Buckingham and Nine Inch Nails closed out the star-studded show with a massive rock medley.

PHOTOS: Check out the red carpet arrivals from the 2014 Grammy Awards!