Goodbye workweek, hello weekend! It's time to get the party started (sorry, we'll never say that again) with a few juicy scoops.

In today's Spoiler Chat, we've got details on an upcoming Mindy Project story featuring none other than Chris Messina's character and those "soft little pillow-magnets," some scoop on Parks and Rec and some royal Reign tidbits.

Sit back, relax and prepare for all the spoiler goodness. Let the scoop wash over you and get your weekend off right.

NEWS: Mindy Kaling on That Epic Final Moment, the Chances of a Third Season and Chris Messina's "Soft Little Pillow-Magnets"

Damian: Desperate for any scoop on Mistresses!
Looks like Savi survives…and is splitting with Harry! The couple, who is not at all on good terms despite Harry telling her he loved her in the finale, will be selling their home in the season two premiere. And what better way to get over a breakup (and near-death experience) than with a bold new look, which is exactly what Savi will be getting in season two.

Bryan: I can't wait for more Looking. A weekly dose of Jonathan Groff is the best cure for the winter blues.
A J. Groff fan, eh? Well, look for the Tony nominee to don some leather in a future episode when his character, Patrick, visits San Francisco's Folsom Street Fair with friends.

Shannon: I'll take anything I can get on The Mindy Project's Danny and Mindy! The wait until April 1 might just be the death of me!
Us, too. Group therapy session might be in order, right? But we do have this interesting nugget to share: In episode 18, a woman from Danny's past, Brooke, comes to town for a visit, but is surprised when Danny isn't exactly down with continuing their history of casual hookups. Hm…now what could make Danny say no? 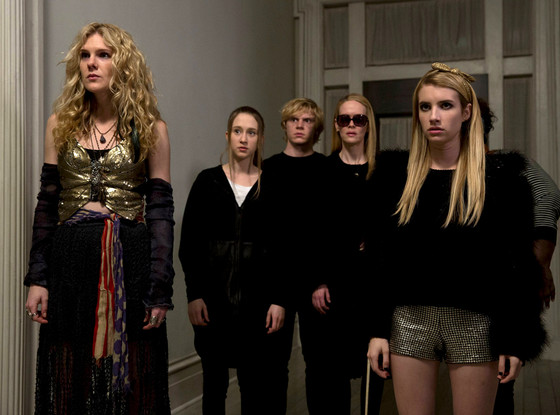 Lily: 1. Parks and Rec getting that early (albeit unofficial) renewal from NBC's boss was the best thing to happen to me in 2014. 2. What's next after Chris and Ann leave Pawnee?
Weflu…"Stop. Pooping."

Zach: Can't believe another character is dying on The Originals! Any scoop on who it is?
How about who definitely isn't dying? We can safely say these five characters are OK: Cami, Josh, Klaus (obvious, we know, but you can deal), Elijah and Marcel.

Jen: WHO IS THE NEXT SUPREME!? I demand you spoil American Horror Story: Coven.
And ruin the fun of watching the huge reveal? Never. But we can tell you a source close to the show said they were surprised by the show's conclusion, yet happy with the reveal. Take that as you will.

SCOOP: Get your first look at Pawnee's goodbye to Chris and Ann on Parks and Rec

Jared: I need information on my new TV obsession Reign!  How is it so good?!
The CW obviously made a Pagan-esque sacrifice in the blood woods. We jest, we jest! While showrunner Laurie McCarthy wouldn't confirm or deny if there's another major death this season on Reign as she's still plotting the final episodes, she teases, "It would not be a minor character." Another thing she wouldn't confirm or deny? If we'll see Elizabeth, Mary's cousin and fellow queen, telling us, "We might get a glimmer of her, but I'm not positive. You'll hear her name more and more this season."

TAGS/ Spoiler Chat , TV , Top Stories , The Originals , Watch With Kristin , The Mindy Project , Exclusives
GET POP CULTURED!
*Email entered incorrectly. Please try again.
By subscribing to our newsletter you agree to the Privacy Policy and Terms of Use
Daily
Weekly