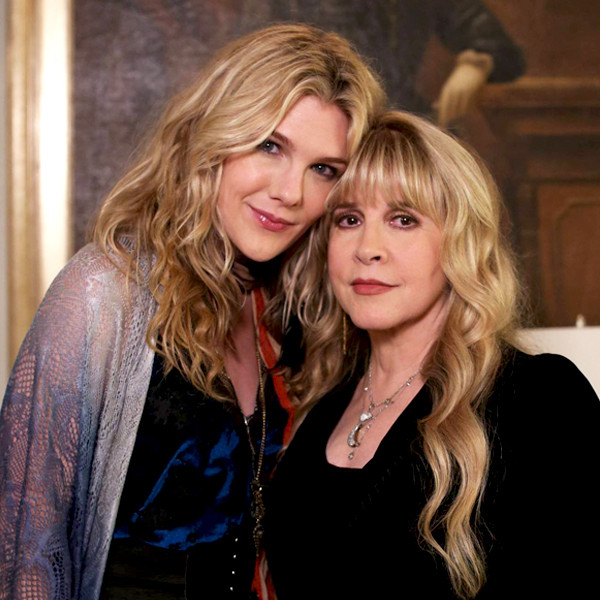 The White Witch is in the Coven.

Stevie Nicks will appear as herself in American Horror Story: Coven, the episode is appropriately titled "The Magical Delights of Stevie Nicks." The Fleetwood Mac singer told E! News she was already a fan of Ryan Murphy and Brad Falchuk's work with Glee, so agreeing to American Horror Story was a natural jump, despite not having seen the first two seasons of the FX series.

"So anyway, they said, ‘It's our third season and we have a character in it, she lives in a swamp, you're her only friend. Your music is her only friend,'" Nicks explained to us. "I'm the person that [when] she's upset, she's unhappy—which she usually is—she listens to my music. I said, ‘Well, that's fantastic.' As a writer, what more can I ask for? I said, ‘Take it, take it all. Whatever you want, I'll make it happen.' And they did, they said, ‘Cool.'"

The result? Misty Day, the swamp-dwelling witch with resurrection powers played by Lily Rabe. After Nicks gave her blessing, she went to Paris and Italy and eventually joined Fleetwood Mac in Dublin for a tour. It was while in Europe that American Horror Story: Coven finally premiered and Nicks said it was like a frantic quest to get the episodes. Thanks to the help of her tech-savvy assistant, Nicks and Co. got their hands on the Coven episodes.

"I'm watching the show going, ‘Oh my god, this is the most twisted thing I've ever seen,'" Nicks said. "I can tell you, I've never seen a horror movie in my whole life. Never! I'm really not a horror person. So, I'm watching this and it is so twisted and crazy. I'm like, ‘Oh gosh, is this more than I had any idea this was?'" Nicks decided to wait for the second installment. After seeing that episode, she said she was "definitely in."

After Fleetwood Mac's tour was cut short—bassist John McVie was diagnosed with cancer, but Nicks said he's doing great and she truly believes "he's going to be fine or I would not be even talking about him right now"—Nicks found herself with some free time and decided to pursue being on Coven.

"This is what I said, ‘I just want to put on a fantastic long black dress and have beautiful hair and wind and really high heels. I just want to walk through the beautiful white house and say "Hello, witches!"' So, I get to New Orleans and in New Orleans, I get this script and it is not just me walking through. My assistant reads it out loud to me at 3 in the morning and I'm pretty horrified because I'm going, ‘Do they know that I'm not an actress? Has anybody told them that I've never, ever done anything like this in my whole life?'"

Nicks said she was nervous for her first day of shooting. She had very little sleep the night before, but everybody from the costumers to the cast and director Alfonso Gomez-Rejon reassured her she was be great. "I really just said, ‘OK, you know what? I'm here now and I'm going to pull it off,'" Nicks said. "I said a little prayer and I just walked straight into it with my head up and said, ‘I'm going to do this.'" 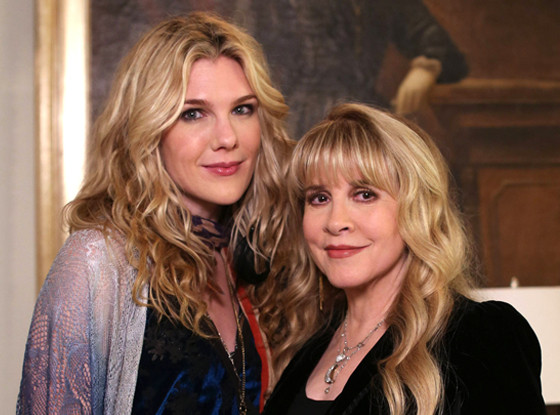 And she did. Nicks has a few scenes in the 10th episode of American Horror Story: Coven. She sings and does a shawl twirl with Rabe. The Coven version of Nicks gives Rabe's Misty Day a shawl. Nicks used her shawl in the scene, but the one that later becomes Misty's was not hers.

"Of course I took it back! It came out of the vault, but I gave Lily a really beautiful black outfit that I thought was so perfect for her," she said. "It's really beautiful—better than a shawl! She got something really beautiful that was mine for a long time and that she will have forever, and she's going to like much more than wearing a shawl around."

You may be wondering why Stevie Nicks was visiting a coven of witches to begin with, and the explanation is quite simple. Fiona (Jessica Lange) brings Stevie Nicks to New Orleans to meet Misty as a way of getting inside Misty's head and feeling out her powers. Fiona's on a quest to find the new supreme and all eyes are on Misty right now. But just because she was on set doesn't mean Nicks came away with any insider knowledge.

"I have gone through every possible scenario because nobody knows. I'm telling you, as god as my witness, nobody on that set knows. Nobody but the writers know, and the writers weren't even there," Nicks said. "So, I've gone through every idea I could get to…I'm going to be as surprised as everybody, because, believe me, they're not telling any of the actors...They can't tell anybody. I think the surprise for even the actors would be blown if anybody knew. I think it would take a toll on everybody's acting because if you know what's going to happen, I don't think it would be anywhere near as good. This way everyone is so on their toes because nobody has got a clue."

After meeting the cast and being immersed in the world of American Horror Story: Coven, Nicks still couldn't pick just one favorite character.

"I don't have a favorite. Each one of them brings something different to the party. Taissa [Farmiga, who plays Zoe] is very demure and very horrified to even be in this position in the first place. Emma Roberts is evil and great. She's so great and she's so cute. She is so the movie star. ‘Hi, I'm Madison, I'm the movie star. Hello, Madison Montgomery, movie star.' She's so into her part that it's fantastic. She just drips evil and it's so great. Knowing that she's Julia Roberts' niece, it's so crazy. You can kind of see her—you can see Julia in Emma and it's fantastic...Lily is my friend. She's like my baby. She loves—she sleeps to my music. Queenie [played by Gabourey Sidibe ], she's fantastic. Queenie just loved hearing me sing. I have to adore her for that. Jessica I got to watch act. I've never seen a real actress really act," she said.

Nicks didn’t have any scenes with Angela Bassett—she didn’t meet the What’s Love Got to Do With It star, something Nicks said she’s “horrified” by and hopes to correct soon—but she did get to know Kathy Bates quite well.

“Kathy Bates came down and then flew back with us. [It was] Five and a half hours in really bad turbulence so we had a ruckus, uproariously funny airplane trip back, so now I feel like I know Kathy Bates better than anybody because we were sure we were going to possibly crash to our deaths. We hit terrible turbulence coming into Los Angeles for about 25 minutes and we were all like, ‘This is it!’ Kathy sat through this with us and she’s going, ‘This is how it’s going to read, “Kathy Bates, Academy Award winning actress and Stevie Nicks, hall of famer, crash to the ground and four others,”’ Nicks said with a laugh. “And she’s like, ‘We’re one of the others!’ and I said, ‘Oh no, no, no, no,’ because there were three Yorkies, too. She said, ‘The Yorkies will get second billing on this one.’ I got to know Kathy. You get to know people on a plane flight, really well. It was a little plane with seven of us. It was pretty crazy.”

All this attention for a character obsessed with her music and brief cameo.

“I will tell you, when I came back from Europe after completing the 62nd three-hour show of Fleetwood Mac from April to October, I get in the car and the limousine driver says to me, ‘Congratulations on American Horror Story!’ [Laughs.] Not one word—not congratulations that you lived through 62 three-hour Fleetwood Mac shows that were great, but congratulations on American Horror Story. That’s my first moment back in the United States. I said, ‘Oh, this is way bigger than even I knew.’ Am I excited about it? You bet! I’m pretty knocked out, I’m happy to be a part of this amazing ensemble.”