Phil Robertson Breaks Silence on Anti-Gay Remarks; Duck Dynasty Star "Will Not Give or Back Off" 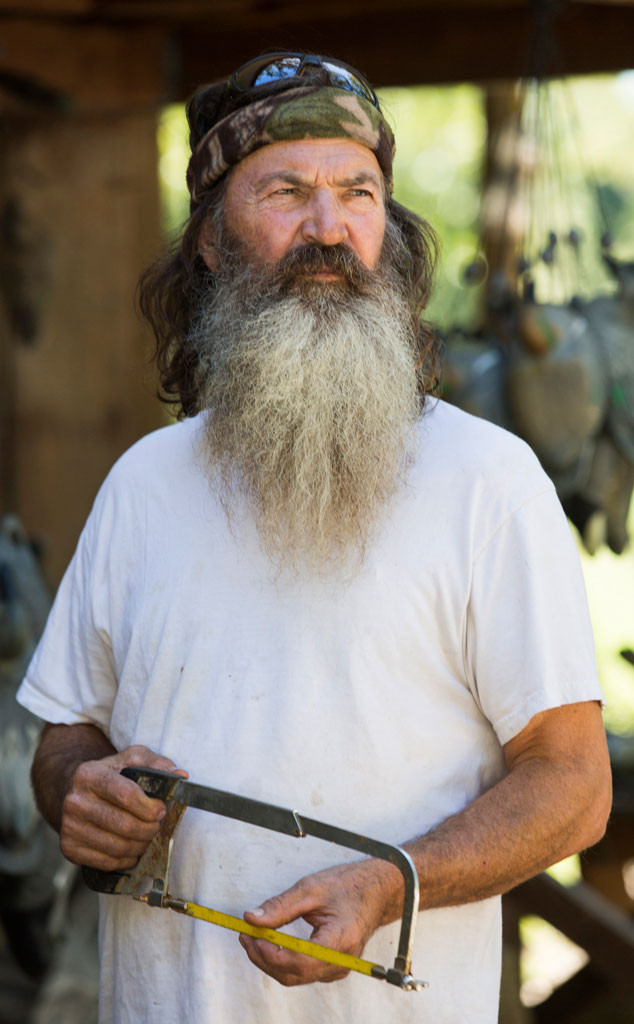 Phil Robertson is facing some serious backlash in the wake of his controversial GQ interview, but that doesn't mean he's backing down on his stance against homosexuality.

On Sunday, Dec. 22, the Duck Dynasty star spoke out for the first time since being suspended indefinitely from his family's hit A&E show. Robertson, who granted the Daily Mail access to the Bible study group he addressed at a West Monroe, Louisiana, church, cited his Christian religion as the reason for his unwavering stance, saying, "I will not give or back off from my path."

"I love all men and women," said the 67-year-old Robertson family patriarch.  "I am a lover of humanity, not a hater."

"Sexual sins are numerous and many, I have a few myself," he admitted. "So what is your safest course of action? If you're a man, find yourself a woman, marry them and keep your sex right there."

"Commonsense says we are not going to procreate the human race unless we have a man and a woman. From the beginning Jesus said, 'It is a man and a woman,'" he went on. "Adam was made and Eve was made for this reason. They left their fathers and mothers and be united to become one flesh, that's what marriage is all about."

"All I did was quote from the scriptures, but they just didn't know it," he claimed of his anti-gay comments. "Whether I said it, or they read it, what's the difference? The sins are the same, humans haven't changed."

According to Robertson, though, "Jesus will take sins away."

"If you're a homosexual, he'll take it away," he said. "If you're an adulterer, if your'e a liar, what's the difference? If you break one sin you may as well break them all…If we lose our morality, we will lose our country. It will happen."

The Duck Dynasty star wanted to clear something up about his intelligence, too. "We are a bunch of rednecks from Louisiana," he said, "but I am not uneducated, I have a degree from Louisiana Tech."

"But this week I have been called an ignoramus. This week I have been asked, 'Is this the first time you have brought up sin?'" he went on. "I said, "Are you kidding? I have been traveling to and fro spreading this message…I have made hundreds and hundreds of speeches and you can pick them apart and the center has always been Jesus Christ."

While many disagree with Robertson's homophobic comments, many of his friends, family members and hometown supporters are standing by him.

In fact, Cracker Barrel announced Friday that their stores stopped selling Duck Dynasty paraphernalia "which we were concerned might offend some of our guests while we evaluate the situation."

But just two days later, the chain put those Duck Dynasty items back on the shelf, stating, "When we made the decision to remove and evaluate certain Duck Dynasty items, we offended many of our loyal customers. Our intent was to avoid offending, but that's just what we've done."

PHOTOS: See the Duck Dynasty guys without their beards