Spoiler Alert! The following article contains major spoilers about last night's episode of Sons of Anarchy. Away with you if you don't want to know what happened!

"Obviously, it's a major shift in mythology."

Understatement of the TV season much, Kurt Sutter?!

Sons of Anarchy's season six finale delivered one of the small screen's most shocking deaths in recent history (just weeks after committing another one!), killing off Jax's (Charlie Hunnam) wife Tara (Maggie Siff, who has been with the show since it began) in particularly brutal fashion: she was killed by mother-in-law Gemma (Katey Sagal) with a meat carving knife.

At a finale screening event in Los Angeles, Sutter talked to reporters about what's ahead for Jax in the FX drama's final season now that he's lost his "moral compass," and revealed when he decided Tara had to die. Plus, Siff and Sagal weighed in on that shocking death scene.

RECAP: Find out what else went down in SOA's finale

Siff, meanwhile, said Sutter filled her in at the beginning of season six. "I had some time to wrap by head around it and head toward it," she said.

Filming the death scene was "very hard" for Sagal, though she acknowledged that SOA "is a violent world, these are violent people. This s--t goes on...It's so interesting because as an actor, it was kind of awesome to do things you haven't done — I've never killed anyone violently in anything before. It was really hard to watch."

MORE: Sons of Anarchy: Ranking the most shocking deaths (so far) 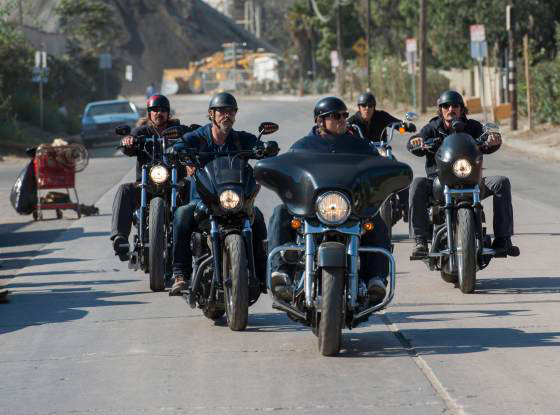 Of the decision to off Tara, Sutter explained "I wanted to remove [Jax's] ‘True North,' because I feel like there needs to be this major psychic and emotional shift that has to happen. What direction it will push him in we will see next season. But what happens to a guy like that now that he's lost both of the people he loves the most, who were able to be his moral compass, with Opie and now Tara. It really is Jax completely untethered and on his own in the final season."

And while there "may be a little of a time [jump]," Sutter said it won't be "a vast" amount of time as "I don't want to lose the weight of what's happened."

As for Sagal, she has no idea what's next for Gemma after killing her daughter-in-law, wondering, "Is that a secret she holds? She's a good secret-keeper. Is that something she self-destructs behind? And Kurt will figure that out for sure."

PHOTOS: Check out all of Sons of Anarchy's OMG Moments!

Of course, Juice (Theo Rossi), who cleaned up Gemma's crime scene and killed Eli to keep her secret, will factor into her storyline in a major way in the final season.

"I don't think it was a calculated move on Juice's part [to save Gemma]; in the moment he did what was expected of him, 'Sutter said of the troubled SAMCRO member. "But now the great thing is that we get this rich dynamic between the two of them. They were tied with the whole Clay of it all and now they're deeply tied with this secret. Now we have really something fun to play with."

PHOTOS: Relive some of TV's most shocking deaths!

TAGS/ Watch With Kristin , TV , Top Stories , Sons Of Anarchy
GET POP CULTURED!
*Email entered incorrectly. Please try again.
By subscribing to our newsletter you agree to the Privacy Policy and Terms of Use
Daily
Weekly