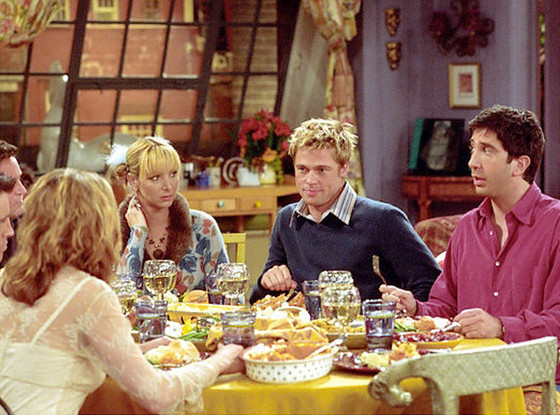 Editor's note: when we say "worst" Friends Thanksgiving episode, we do not mean it's a bad episode by any means. All ten Thanksgiving episodes are wonderful, the "best" and "worst" terminology is for official ranking purposes only and not to be taken to heart.

It's almost Thanksgiving, which means we need to tackle the most daunting of tasks. No, we're not talking about resisting the urge to call out Aunt Nancy for her mashed potatoes that are not homemade despite what she says. (Sit on your throne of lies, Aunt Nancy!) We're talking about ranking the Friends Thanksgiving episode in order of general awesomeness.

RELATED: The 11 emotions you experience after finding out Friends is coming to Netflix

Sounds simple, right? Well, it's kind of like Ross and that state game. Once you sit down to actually do it, it's a lot harder than you ever could have imagined. For your enjoyment and consideration, here is how the Friends Thanksgiving episodes rank, according to our standards (which are really high as we are Friends super-geeks and super-experts):

This isn't technically a Thanksgiving episode (to us, anyway), meaning Monica isn't cooking dinner and there are no plans to sit around the table to celebrate. Monica was too busy cooking "Mocklate" goodies to roast a turkey. But this episode is still special because just when you think Ross and Rachel are finally going to get together, he goes and makes a dumb pros and cons list to decide if he should be with Rachel or Julie. Damn your stupid computer, Chandler! Rachel would never make a list, Ross! Man, we might still have unresolved anger issues over this episode.

This episode would be pretty standard in Friends Thanksgiving terms were it not for the state game that Ross was forced to complete before eating any dinner. And he never actually finished it (he put Nevada twice), even though he showed up in the middle of the night for some turkey. Oh, and Tag and Rachel got together finally, but who cares about that? She ends up with Ross, anyway. (Decade-old spoiler alert?)

RELATED: Your guide to what's actually new on TV this Thanksgiving week

Got the keys! Got the keys? Regardless of what you think Monica said before they all got locked out of the apartment when they went to watch the Underdog balloon float recklessly around Manhattan, what matters is that by the end of the episode, everyone sat down together to eat grilled cheese sandwiches and toast to a crappy new year.

Because of the Rangers game and the Grand Supreme Little Darling competition, Thanksgiving almost didn't happen in this episode. We were going to rank it lower on the list but Joey's weird eye contact thing changed our mind. Plus, the end of the episode revealed that Monica and Chandler were next in line to adopt a baby, so we don't really care how awful the floating heads were before dinner. Group hug!

PHOTOS: Find out how your favorite shows are doing in the ratings!

Fun fact: Reese Witherspoon was supposed to reprise her role as Rachel's sister Jill in this episode, but she wasn't able due to her schedule. So Christina Applegate was tagged in as her other sister Amy, and she won our hearts (and an Emmy) for her hilarious turn as the self-centered Green sibling. We're not sure what's better: Amy's plan to raise "Emily" after Ross and Rachel die or the fight that goes down between the two sisters at the end of the episode.

This episode isn't just about football! This episode is about long-standing sibling rivalries, a battle of the genders and Rachel sucking at sports! OK, it's mostly about football, but those things are in there, too. We award this episode all the Gellar Cups, which, yes, is just a troll nailed to a two by four.

The reason this episode is in our top five is threefold. One: it has Chandler in a box. Two: Monica makes out with Richard's son (ew). And three: it has a very sweet moment between Joey and Chandler. C'mon, you know you get a little choked up when Joey begs to "open the box!" so Chandler can go get Kathy.

This one might have ranked higher if Jennifer Aniston and Brad Pitt were still together. This one's on you, Angelina Jolie! But their very public divorce makes the fact that Will (Pitt) and Ross had an "I Hate Rachel Club" in high school and started a rumor that Rachel had both male and female parts puts makes this episode just slightly sad. Only slightly. Because how sad can you feel when Brad Pitt starts yelling about yams?

RELATED: 14 things you can teach your family this Thanksgiving

2. "The One With All the Thanksgivings" (Season 5)

Flock of Seagulls hairstyles on Ross and Chandler? Chubby Monica? Pre-nose job Rachel? This episode is a gift that keeps on giving, no matter how many times you watch it. The flashbacks are enough to put this one in the No. 2 spot, but because it's also the first time Chandler (accidentally) says "I love you" to Monica while she's wearing a turkey on her head is just the pair of giant sunglasses on our proverbial head-turkey.

This is the perfect Friends episode to showcase how perfect their group chemistry was. All the lies and shenanigans that took place over the first 15 minutes, from Rachel making a meat trifle to Ross blaming Chandler when he was caught smoking weed, culminated in a perfect rant by Judy Gellar. Take us home, Jude: "Joey, if you wanna leave, just leave. Rachel, no, you weren't supposed to put beef in the trifle. It did not taste good. Phoebe, I'm sorry, but I think Jacques Cousteau is dead. Monica, why you felt you had to hide the fact that you had an important relationship is beyond me." How anyone can not pick this episode as the top Friends Thanksgiving is beyond us.

We know you Friends fanatics have disagreements over this list, so let's hear it! Head to the comments and tell us how you think each episode should rank on a top ten list.

PHOTOS: We ranked all the Friends couples...and #1 may shock you!