Lily Allen Fires Back at "Hard Out Here" Racism Claims: "The Video...Has Nothing to Do With Race" 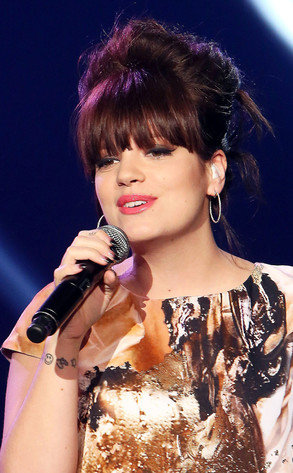 We'd be willing to be Lily Allen may be playing her comeback single "Hard Out Here" on repeat in the wake of her latest controversy.

After a four-year hiatus from the music biz, the 28-year-old singer released the first single and accompanying music video from her currently untitled third studio album on Tuesday, Nov. 12, and the performer has already found herself on the receiving end of criticism after reports claimed the clip has racist undertones.

In the video, which is meant to be a massive parody on pop culture, the mother of two throws shade at both Robin Thicke and Miley Cyrus, gets fake-liposuction and instructs her dancers to twerk while they shake their butts for the camera.

Allen took to Twitter to address the racist claims, writing a lengthy post, titled "Privilege, Superiority and Misconceptions" in which she defends her decision to hire African American women as her backup dancers, while insisting that the video has "nothing to do with race."

She continued, clarifying the meaning behind her music video, which features lyrics where Allen addresses the criticism she's often forced to face as a public figure.

"3. The message is clear," she posted. "Whilst I don't want to offend anyone. I do strive to provoke thought and conversation. The video is meant to be a lighthearted satirical video that deals with objectification of women within modern pop culture. It has nothing to do with race, at all."

And she didn't stop there—explaining that she tried to perfect her twerking moves like her dancers, but ultimately decided to leave the booty-shaking scenes to the experts.

"4. If I could dance like the ladies can, it would have been my arse on your screens; I actually rehearsed for two weeks trying to perfect my twerk, but failed miserably," she admitted. "If I was a little braver, I would have been wearing a bikini too, but I do not and I have chronic cellulite, which nobody wants to see. What I'm trying to say is that me being covered up has nothing to do with me wanting to disassociate myself from the girls, it has more to do with my own insecurities and I just wanted to feel as comfortable as possible on the shoot day."

She added: "5. I'm not going to apologize because I think that would imply that I'm guilty of something, but I promise you this, in no way do I feel superior to anyone, except pedophiles, rapists murderers etc., and I would not only be surprised but deeply saddened if I thought anyone came away from that video feeling taken advantage of, or compromised in any way," she wrote, before sending her haters straight to the source:

What do you think of the singer's music video? Tell us in the comments!

TAGS/ Lily Allen , Music , Controversy , Top Stories
GET POP CULTURED!
*Email entered incorrectly. Please try again.
By subscribing to our newsletter you agree to the Privacy Policy and Terms of Use
Daily
Weekly