Demi Lovato: People Would Be "Shocked" to Hear My Drug and Alcohol Abuse Stories 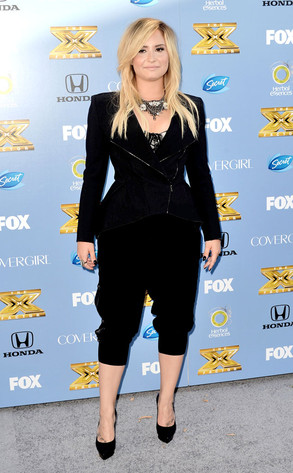 Demi Lovato is opening up about her darkest days.

While the erstwhile Disney star may now be in a better place than ever, it's no secret that the "Heart Attack" singer abruptly withdrew from the Jonas Brothers Live In Concert Tour in October 2010 to enter a treatment facility for "physical and emotional issues" at the young age of 18.

The performer left the rehab center in January 2011, and has since led a sober life while maintaining a successful career in Hollywood, most recently celebrating her 21st birthday with a booze-free bash in Africa after declaring she wanted to "set an example for others" on her special day.

And in a new interview with Entertainment Weekly, the 21-year-old beauty opens up about her past struggles and why she strives to be a role model every day, unlike other young stars in the music biz.

"I used to say that too," she said referring to pop stars who refuse to call themselves role models despite their many adoring fans. "That was my excuse to do whatever the f--k I wanted and not give a s--t about what other people thought. Then I ended up going through some stuff. I realized I'm never going to escape the fact that I'm in the public eye, so I might as well do the best I can."

After Lovato received treatment, the former Sonny With a Chance star announced her departure from the show in April 2011 and released her third studio album Unbroken in September. The record's lead single, "Skyscraper" peaked at No. 10 on the Billboard Hot 100 and received critical acclaim for its message of self-confidence and acceptance.

"When I was in treatment, I honestly thought my career was over," she admitted. "But when I came out of treatment, I had more supportive fans than ever."

Since her time in rehab, Demi has also revealed that she's bipolar, has opened up about her previous use of cutting as a way to cope and has been candid about her eating disorder struggles although she has not specifically delved into her past drug and alcohol abuse.

But now, the X Factor judge confessed that may be about to change now that she's signed on to pen a tell-all memoir.

"I'm battling with internal thoughts on how honest I should be," the Glee star revealed. "Yes, I've been very honest, but if people really knew how dark and deep my struggles got—not just with my eating disorder but with drugs and alcohol—they'd be really shocked. But I'll most likely end up saying everything. Maybe it'll help other people in the industry who are headed down the wrong path."

Lovato also had a few wise words to say about pal Miley Cyrus, who she has previously defended in the past, although she has also warned the "Wrecking Ball" singer about her hard-partying ways.

"She's having fun and figuring out who she is, and this is the age when that happens," she said. "I think that…she's doing her own thing. Good for her."