New $100 Bills Are Here: Everything You Need to Know About "the Most Complex Note" Ever Made 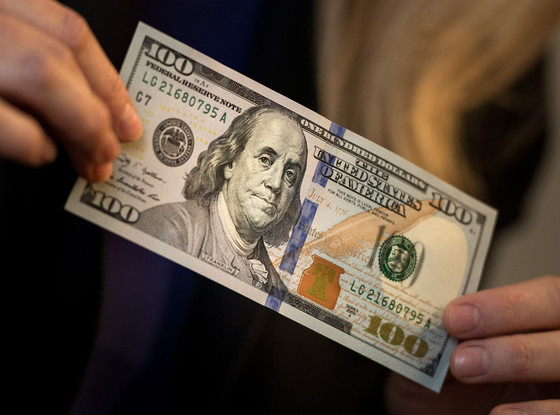 The hundred-dollar bill just got a makeover and it's making its big debut today.

Fun fact: The $100 is the second most common bill in circulation, "behind only the $1 bill," says to Yahoo Finances. "It's slightly more common than the $20 bill." Which means you're going to be seeing plenty of this swanky new print. Make it rain!

"The new design incorporates security features that make it easier to authenticate, but harder to replicate," said Federal Reserve Board Governor Jerome H. Powell. "As the new note transitions into daily transactions, the user-friendly security features will allow the public to more easily verify its authenticity."

Here's everything you need to know about the bill:

1. It's Been a Long Time Coming: The redesign for the new $100, the first for the bill since 1996, has been in development for a decade. It was set to roll out more than two years ago, but was delayed due to issues with creasing and smeared ink.

2. Benjamin Franklin Isn't Going Anywhere: Franklin wasn't cut from the new design, his face is still featured on the front of the bill. Twice! "Hold the note to light and look for a faint image of Benjamin Franklin in the blank space to the right of the portrait." (via newmoney.gov)

3. The 3-D Security Ribbon: The most notable change is probably the broken, blue strip down the front of the bill. "The 3-D security ribbon is magic. It is made up of hundreds of thousands of micro-lenses in each note," said Larry Felix, the director of the Bureau of Engraving and Printing. "This is the most complex note the United States has ever produced." The ribbon is woven into the bill's paper too, not printed on it, and if you "tilt the note back and forth while focusing on the blue ribbon, you will see the bells change to 100s as they move."

4. The Security Strip: That blue ribbon is part of a pair: If you hold the note to the light, there is another embedded thread on the other side of the Benjamin Franklin portrait that reads "USA" and "100." If you hold the bill up to ultraviolet light, this tread glows pink.

5. The Bell in the Inkwell: The other bold additions to the front of the bill are a feathered quill and a copper inkwell. If you tilt the note, there's a Liberty Bell hidden inside the inkwell that shifts from cooper to green.

6. All Gold Everything: This is a $100 bill we're talking about, after all. Let's make it fancy! The gold "100" on the front of the note, like the inkwell, shifts from cooper to green. Meanwhile, a giant "100" has been added to the back, to "help those with visual impairments distinguish the denomination."

7. It Doesn't Just Look Different, It Feels Different: "Move your finger up and down Benjamin Franklin's shoulder on the left side of the note. It should feel rough to the touch, a result of the enhanced intaglio printing process used to create the image. Traditional raised printing can be felt throughout the $100 note, and gives genuine U.S. currency its distinctive texture," newmoney.gov explains.

8. New Hundos Are Only Printed in Two Places: Washington, D.C. and Fort Worth, Texas. If your bill is marked with a "F.W.," it hails from Texas. If it's unmarked, you can rightfully assume it was made in D.C.

9. You May Not See the New $100 for a While: At least, not in person. "It may take some time before you see a new design $100 in circulation," Sonja Danburg, the program manager for the U.S. Currency Education Program explains, noting that the demand and distance from the Fed. Bank will affect when they make their way to your local bank.

10. In the Meantime, Keep Using Your Old $100s: Danburg continues, "You can still trust and rely on the security features in the previous $100 note design. Remember, it's U.S. government policy that all designs of U.S. currency remain legal tender, no matter when they were issued."

It just doesn't look as pretty.

TAGS/ Top Stories , E! Loves , Money , Politics
GET POP CULTURED!
*Email entered incorrectly. Please try again.
By subscribing to our newsletter you agree to the Privacy Policy and Terms of Use
Daily
Weekly