A Beginner's Guide to Twerking: What Is It, Why Is It Happening and How Do You Do It? 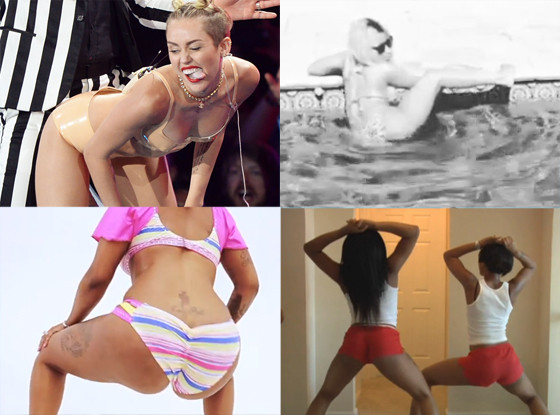 If you have a pulse, two ears and an eye on CNN (yes, CNN), then you've already heard of twerking. But what is it? Why are people doing it? And how did Miley Cyrus twerking at the 2013 MTV VMAs fix the economy and bring peace to the Middle East?

As Miley's performance continues to fuel a million, billion headlines, we understand that you will have questions. And we have answers to those questions in E!'s Beginner's Guide to Twerking:

Who isn't twerking? Students and strippers, grandparents and babies (yes, babies). But you are here because of Miley Cyrus. The former Hannah Montana star brought the twerking craze into living rooms around the world, first revealing her moves in a Facebook video, then in her "We Can't Stop" music video and most recently onstage at the Video Music Awards with Robin Thicke.

"I haven't really seen one bad comment about my twerk video," Miley said after her original twerking video debuted. "This is the first thing! All right, I can't sing, I can't act, I'm dumb, I'm a hillbilly, but I can twerk, so whatever!"

VOTE: It's Britney Spears vs. Miley Cyrus is our nearly-naked VMA Fashion Face-Off!

The dictionary defines twerking as "Did you mean tweaking?"

(To be fair, they just added tweet this year. Give them time.)

Urban Dictionary defines twerking as "the act of moving/shaking ones ass, buns, bottom, buttocks, bum-bum in a circular, up-and-down, and side-to-side motion," with another entry explaining, "You can make it wobble, boomerang, bounce, clap, etc."

The phrase could possibly be a combination of twist and jerk, as noted by Wikipedia, or it could simply be a made up work. Like how werk is almost the same word as work, but we'd rather be werkin' than working, if you know what we're sayin'.

NEWS: Is Camp Cyrus freaking out over Miley's VMA performance? Sources say no!

Contrary to what you might believe, Miley Cyrus is not The Inventor of Twerking. Twerking has actually been around since the early ‘90s (though, considering Miley was born in late 1992 and twerking was first mentioned in 1993, perhaps she is the Messiah of Twerking, born so that we might one day know this dance craze).

Twerking started in the New Orleans bounce music scene. In 1993, DJ Jubilee released "Do the Jubilee All," which featured the lyrics, "Twerk baby, twerk baby, twerk twerk twerk." In the next few years, NOLA rapper Cheeky Blakk dropped "Twerk Something!" and rap duo The Ying Yang Twins mainstreamed twerking with "Whistle While You Twurk."

Cut to 2013: Miley Cyrus makes a video mimicking the moves she had presumably seen in any number of YouTube videos and is legitimized when Jay Z raps, "Somewhere in America, Miley Cyrus is still twerking," in a track on his new album, Magna Carta...Holy Grail. She has not stopped twerking since.

A few possible reasons: Because it's a novelty now that Miley Cyrus did it and is guaranteed to get you a handful of YouTube views or a few laughs from your friends. Because it's a culturally relevant dance for you. Because you want to.

Or, as one PhD researcher explained to ABC News, it is a great workout for your butt and thighs, as well the deep muscles of the hips, lower back muscles and abs. The report explains that, "It will shape and strengthen all those muscles as well as give them the stamina to do activities important to most people heavily involved in terming like say, picking up a screaming child off the floor."

By following along to one easy, 3-minute YouTube tutorial:

One testimonial to the teaching powers of this video claims, "Although, I'm still a novice at the dance, the how-to video has unleashed my inner twerk dragon."

Note: As a general rule of thumb, the more booty you have, the better your twerk be. So don't skip squat day at the gym, boys and girls.

Alternately, you can just shake your ass a lot in any which way and say you're twerking. Because who really cares enough to tell you you're wrong? It worked for Miley.

PHOTOS: Check out some of Miley Cyrus' most outrageous quotes now!