One Direction's This is Us: Critics Aren't Exactly Fawning Over Boy Band's 3-D Film

As the members of One Direction bask in the glow of Tuesday night's world premiere in London of One Direction: This Is Us, critics have been less than kind to their new 3-D film, directed by Super Size Me filmmaker Morgan Spurlock.

This Is Us is an intimate, behind the scenes look at the U.K. quintet as they embarked on their most recent globe-trotting tour and features live concert footage from London's O2 Arena as well as the debut of One Direction's new single, "Best Song Ever," from their soon-to-be released album, Where We Are.

Here's a sampling of some of the most noteworthy reviews of Harry Styles and company, many of which have likened the work to a sanitized promo piece that fails to offer any substantial insight into 1D's career or, for its tween fan base, the boys' romantic lives.

VIDEO: Check out this sneak peak of This Is Us

• "For fans this might feel like they're getting closer to the group, but it's all carefully calibrated to reinforce the 1D brand. This is not a film. It's propaganda," panned Digital Spy.

• "Although the group is described as 'a bit anarchic' by a British critic here, any evidence of paramours or partying has been scrubbed clean from these reels, and the fivesome rarely say anything of much interest. Yet they're unerringly charming on camera, and for a generation raised on Justin Bieber's Twitter musings, hearing the heavily accented Liam Payne describe the group 'proper having a full-on strop' must seem thrillingly exotic," wrote Variety on the other hand, which also gave props to Styles' charisma. 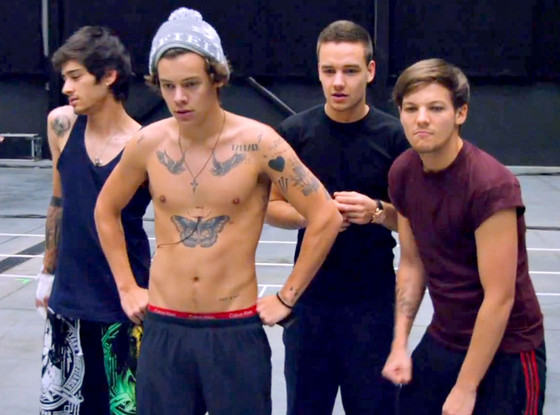 • "The filmmakers' intent to depict them as 'normal guys' mostly succeeds, primarily due to their not inconsiderable charm. Scenes featuring their predominantly teen female fans are limited to crowd shots and brief sound bites, while any footage revealing smoking, partying or romance has been studiously excluded," opines The Hollywood Reporter.

• "What's the opposite of warts-n-all? 'No warts' doesn't even begin to describe Morgan Spurlock's fly-on-the-wall film about One Direction. No warts, no acne—there's not even a pimple on the butt of this on-tour portrait of the reality-bred boy popsters (girlfriends or boyfriends or whatever, have been airbrushed out entirely)," noted Time Out London. "The director is Morgan Spurlock—the man who took on McDonald's in Super Size Me. But you won't find an anti-corporate message here. This is relentlessly on-message, crammed full of cheeky shirtless moments for fans of Harry Styles, Zayn and the three fillers."

• "An odd moment occurs during a shopping trip in Amsterdam when the boys visit a sportswear shop, and within minutes are hemmed in by a shuffling, groaning horde worthy of Dawn of the Dead. This Is Us has been made with these fans in mind, and there's nothing like a guaranteed profit to stifle creativity," observed The Telegraph.

• "This really is Beatlesmania for the 21st century," praised The Mirror. "With slick concert footage, no mention of girlfriends or groupies and the group PG confessions round a camp fire there is plenty to keep the fans happy."

One Direction: This Is Us is slated to hit U.S. theaters on Aug. 30.

PHOTOS: Check out more photos of One Direction

TAGS/ Top Stories , Movies , One Direction , Harry Styles , , Premieres
GET POP CULTURED!
*Email entered incorrectly. Please try again.
By subscribing to our newsletter you agree to the Privacy Policy and Terms of Use
Daily
Weekly