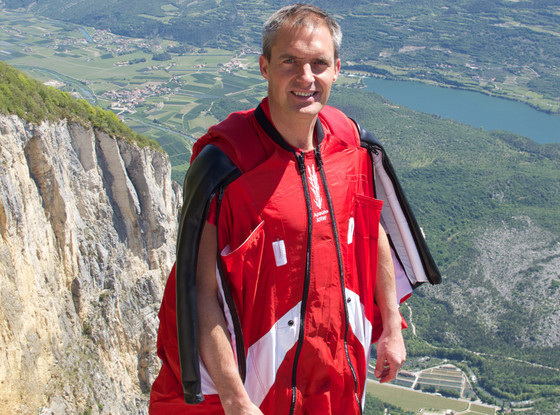 One of the most memorable moments from the 2012 London Olympics now has a very sad coda.

Mark Sutton, who delighted the world when he parachuted out of a helicopter as part of a James Bond-themed stunt during the opening ceremony, was killed Wednesday in a wing-diving accident in the Swiss Alps. He was 42.

According to police, the veteran stuntman and skydiver was participating in non-competitive event when he jumped out of a helicopter and crashed into a mountain ridge near Trient, Switzerland.

"The accident occurred on the first day of the three-day event after several successful jumps had already been made," organizer Epic TV said in a statement on its website. "Rescue services arrived quickly and determined that Mr Sutton had immediately died upon impact."

The investigation into what caused the failed jump is ongoing. Wing-diving, or wingsuit flying, is an extreme sport in which the athletes don aerodynamic suits with fabric under the arms and between the legs that is supposed to act like wings and allow the wearer to glide through the air before ultimately relying on a parachute to land.

"Such sad news about Mark Sutton. As one of the world's top skydivers and stuntmen his death is a huge loss to his profession," Danny Boyle, who directed the Summer Olympics opening ceremony, said in a statement obtained by E! News.

PHOTOS: The Olympics in pop culture

"In a brilliant partnership with Gary Connery they made the stadium gasp at the Opening Ceremony in London 2012 and left indelible memories for people from all walks of life all over the world. They were a delight to work with and after each practice jump brought their cheery, carefree smiles into the stadium control room. Their courage, professionalism and modesty was always a boost for those of us locked inside the park."

Connery was Queen Elizabeth II's stuntdouble, parachuting into the stadium along with Sutton-as-James-Bond after current 007 Daniel Craig and the actual queen had set the stage in a pretaped bit.

"all you jumpers/flyers out there, stay safe, make wise choices and know your limits and your locations live to tell your stories one love," Connery tweeted Wednesday. He added today: "Mark Sutton was without doubt the best, No.1 Bond ever, style, panache, and looks to match, and he did his own." 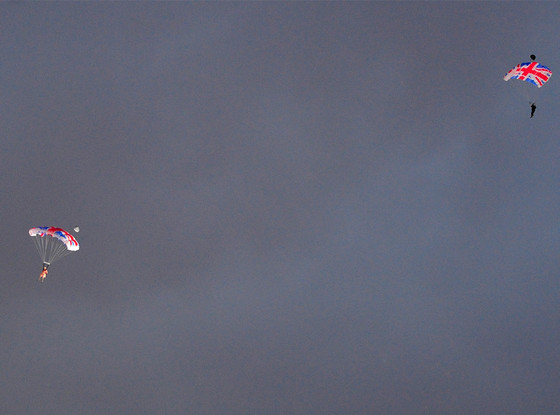 Boyle fondly recalled how Sutton and Connery would sneak bottles of wine to the crew in Olympic Park, where alcohol was verboten, while they were rehearsing.

"Disciplined and brave in situations most of us would find terrifying, Mark was also a gentle and thoughtful man," the filmmaker said. "Courtesy of loading the helicopter in Essex, and thereby avoiding the official security ban on alcohol in the park during rehearsal, he and Gary also smuggled with them an excellent bottle of wine for the crew each evening and before we all went home we would often drink their health. They of course, as top stuntmen, never touched a drop but they sensed our need of occasional fortification! The show was built from so many contributions from so many people, none finer and braver than Mark Sutton's. On behalf of everyone in the show we were all honoured to have him worked with him and to have known him as a friend and professional. All our thoughts are with his family, friends and colleagues. Thank you Mark."

Sutton, a former Royal Gurkha Rifles officer in the British Army, also worked as a consultant for RBS Markets and International Banking. The company said Thursday: "We would like to offer our condolences to his family and our thoughts are with them at this very difficult time."