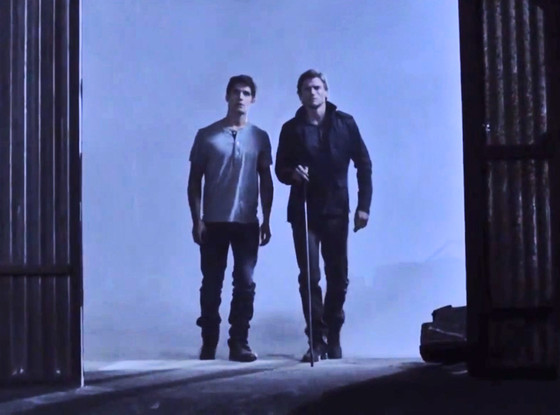 Breakout your best black clothing as death is coming...again!

Teen Wolf's third season has been a bloody one so far and the bloodshed will continue in the MTV hit's summer finale come Monday night. But just how many deaths should fans be prepared to endure? Will Stiles (Dylan O'Brien) and Derek (Tyler Hoechlin) interact at all? Does Scott (Tyler Posey) come face-to-face with his FBI agent father? And will the finale end on a cliffhanger? So many questions, so little time! But because we're awesome, we've already seen the epic hour and are handing out scoop like it's Halloween candy! We asked for your questions on Twitter and answered the ones we could without completely spoiling "Lunar Ellipse."

Paleisnewblack: Does it wrap up enough of 3a to allow 3b to start fresh(ish)? Is it believable?
Wait, are you seriously asking if a show about werewolves is believable? Um, as believable as it can be? And yes, it feels like the closing of a chapter and the start of a new one...with the potential for this to be the end of the story for one of our characters who decides to leave town by episode's end.

jennnnn92: will we find out more details about Scott's dad?
While Scott's dad is in the finale, he doesn't play a major part. Scott and his father will come face-to-face though and Scott is not picking up anything that he's putting down. But Papa McCall will definitely be sticking around Beacon Hills for a while.

christina_bucks:  Will Stiles and Derek interact at all in the episode??
Negative. Sorry, Sterek ‘shippers.

Angela_Rocca: Is Stiles getting into a car accident? I saw something bad in the promo... #TeenWolf
There is one pretty gnarly car accident and one almost accident that occurs in a flashback.

PhantomRat: Just one important question: Would you make out with this finale?
We'd probably go to first base with this finale…with some over the shirt action. We're classy like that.

onlymystory: Is Danny magic?
You mean is he magic during the five seconds we see of him? Yes, yes he is.

hannah_edgson: will it end on a terrible cliffhanger? #teenwolf
No, there's a lot of closure, but still with plenty of set up for next season, including a new big bad that we've met before…

READ: Get more scoop on season 3B!

Grimes_Gurl: please tell me Isaac will be ok!?
Will be ever really be OK? But yes, he makes it out of the hour alive. And gets to snack on some Icebreakers along the way!

windycitygirl89: Is the connection that Stiles/Allison/Scott have now further addressed? If so, will we get a glimpse at how they feel afterwards?
The first scene reveals the connection, but there isn't a lot of followup. Expect to see a lot more of "the darkness" and what it draws to Beacon Hills when the show returns in January. As for how they feel afterwards, it inspires Allison (Crystal Reed) to prepare herself for what's to come, while Scott and Stiles are trying to stay positive...

_FireToYourIce: Will Derek get any moment of "triumph"? Or can I expect more pain?
To quote Katy Perry, you're gonna hear him rooooooar. Well, kind of. But we feel like Derek finally has become the wolf/person he's supposed to be, if that makes any sense.

READ: Find out who recently died on the MTV hit series!

Line of the Night: "Someone in desperate need of a pedicure. I'd be happy to give you a referral." Heart you the most, Lydia.

AllisonIsKiller: What gif accurately describes your feelings/state of mind after finishing the finale?
After the penultimate scene, we were like:

But after the final scene, we were all:

TAGS/ Teen Wolf , TV , Top Stories , Watch With Kristin
GET POP CULTURED!
*Email entered incorrectly. Please try again.
By subscribing to our newsletter you agree to the Privacy Policy and Terms of Use
Daily
Weekly