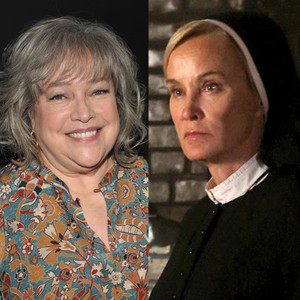 The magical new season of American Horror Story hasn't even premiered yet, but we're already under its spell!

A bewitching panel of A-list actresses took the stage at FX's TCA Press Tour on Friday and shared with us as much as they could about the highly anticipated new season of American Horror Story: Coven.

While the majority of the plot points were kept hush-hush, the four leading ladies, Jessica Lange, Sarah Paulson, Kathy Bates and Angela Bassett were able to reveal their character's names and as much as they could about the wicked new season, which premieres in October.

Girls Just Wanna Have Fun: Executive Producer Tim Minear promises that this season of AHS will feature an "amazing" and "off the hook" cast, Minear says, "All of these women are playing very iconic, very strong female characters. Not all of them are witches, some of them are witches, but they're all powerful."

The EP explains that the new season will still have its thrills and chills, but it will definitely be more of a fun and female-friendly show. "This year is a drama, but there is a lot of humor. We are embracing a kind of velocity and fun with the series this year," he says. "This is going to be the most friendly place for women on television this year. Friendly, until we do the things we do."

Each year AHS tackles new themes and issues, and Coven will put the spotlight on a new motif. "I think some of the bigger themes of this season are oppression of minority groups of all kinds," Minear said. The new season will also features a lot of focus on mother-daughter relationships. And speaking of that…

Like Mother, Like Daughter: Paulson took the stage with the same color golden locks as her co-star Lange, and this lovely lookalike is not an accident! Paulson teases, "I play Jessica's daughter this year." Lange will play a witch named Fiona, so it's likely that Paulson's character, Cordelia, will have magic in her blood, as well. Minear hints that the name Cordelia is connected to the iconic King Lear character. (Go on, Google it. We'll wait!)

Mama witch Lange says that fans should expect a magical season that is unlike anything we have seen from the series before. "I think everybody knows the subtitle is Coven, so some of us play witches, some play historical characters. I do play a witch." Please excuse us, we just need a moment to process all of this magnificent news.

The AHS super-veteran teases that the witchcraft has been a fun part to play, but she is still getting to know her character. "We move back and forth in time, so it encompasses a lot of different stories. The truth is I've shot two days so far…I don't know who the character is yet. I really don't."

However, the iconic actress is confident that she and the rest of her girl power cast members will fully embrace their new Coven alter egos: "The great thing about this entire cast is you have to be brave. You just have to jump in and do it and not be cautious," she continues. "You have 12 episodes to create this character and you don't always know what the next episode is going to present for you."

Historical Inspirations: As Lange clarified, some of the characters will not just be a figment of creator Ryan Murphy's imagination. Instead, the showrunners are also pulling inspiration from real-life historical figures.

Academy award-winning actress Bates will be playing Madame LaLaurie, who was a Louisiana-born socialite living in the 1800's. Now here's the part that sounds like the twisted AHS that we know: LaLaurie was serial killer known for her involvement in the torture and murder of black slaves.

Bassett's charcter, Maria Laveau, is also a woman who has frequented the 1800 history books. Laveau was a Louisiana Creole practitioner of voodoo who was widely renowned in New Orleans for her skills. The AHS newbie says that she has been doing a lot of research on her on-screen personal and is eager to see where the show takes her this year.

MORE: Catch up on all the TV news from the Summer TCA Press Tour!

Bubble, Bubble, Toil and Trouble: We know that there will be witches roaming the new world of Coven, but it should be noted that not all of these magic-wielding mavens will use their powers for good in the New Orleans-based season.

Minear clarifies that like in all tales, there are some witches that you just don't want to mess with. "We're taking the idea of the Salem witches fleeing to the South at some point. There's these two different kind of witches in our world," he says. Sounds like something wicked this way comes!

American Horror Story: Coven will premiere on FX in October.

PHOTOS: Check out all the new TV shows hitting your screens this fall!