Lost Redux: Promises to Keep, and Miles to Go Before We Sleep 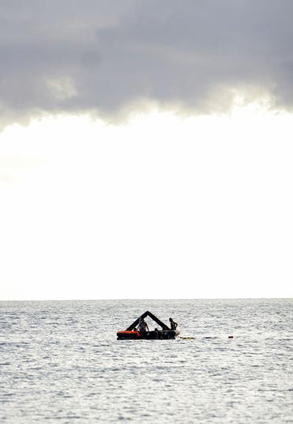 Jen here with your final redux of season four. (Sorry everyone, Kristin planned this trip she's on months ago before the Lost finale moved back a week. She will be back Monday. Please bear with me until then!)

Anyway, if you've haven't seen it yet, well, your priorities are all screwed up anyway. Begone.

If you have seen it, chase those peanuts down with a little Dharma rum and join us for a redux of Lost's "There's No Place Like Home, Parts Two and Three." 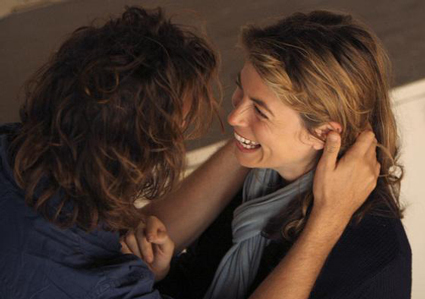 WHAT WE LEARNED, OR...18 AWESOME THINGS THAT HAPPENED IN THIS EPISODE

1. Kayid! Kate and Sayid have been awesome together ever since the pilot, and it's still a pleasure to watch their silent camaraderie, especially against the Rambo guys.

3. Keamy died, and it's about frelling time. So long, sucker! Don't let the door hit you on the ass on the way out.

4. JuJu. Seriously, that woman's smile to Daniel? It was like an angelic benediction. Elizabeth Mitchell is amazing, and I love Juliet for keeping her promise to get everyone off the Island before going herself.

5. Charlotte was born on the Island! Island natives are always fascinating: See, for example, Ms. Alexandra Rousseau (Alex is her slave name, yo) and Turniphead. Best of all, I think this means more Rebecca Mader. Holler!

10. Yunjin Kim. Sun's screams when the freighter exploded Jin in front of her were perfect and right and wrong all together.

12. Jack leaned back in the rubber boat and sighed with relief, "It's OK...It's OK...we're alive." Kate and Sun, despite being alive themselves, had brilliant expressions that read something like, "Speak for yourself, dumbass!" Can't wait for those two grieving widows to discover their lovers (and friends) are alive (uh, right?!) and need a ride back home from purgatory. They are going to be fierce, and not the annoying Christian Siriano kind of fierce either—more like the Amazon warrior princess kind of fierce.

14. Desmond and Penny kissed spectacularly! Now that, my friends, is a TiVo moment of Lost.

15. Penny immediately adopted the Losties as her own. We love you, Pen.

16. There was an Octagon Global Recruiting commercial! You sly bastards...

17. Frank Lapidus (Jeff Fahey). Full stop. Unlike Jack, I do hope we see him again, because he was one of the leading awesome things in this awesome episode.

18. Jeremy Bentham was Locke was in the coffin!!! 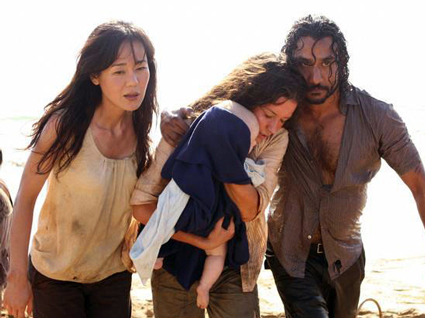 Who is off the Island, but has to go back whether they like it or not?
Kate, Sayid, Jack, Sun, Hurley, Walt, Ji-Yeon, Aaron, dead Jeremy Bentham-flavor Locke, Desmond, Ben and maybe Frank

Which Islanders are neither safe nor sound, but at least standing on dry land?
Sawyer, Juliet, Rose (and probably Bernard), Charlotte, Miles, Island-guru-flavor Locke, Vincent the dog and Richard Alpert

Who is missing in action and currently unaccounted for?
Claire, last seen in the jungle before being beckoned into some kind of weird vision quest by her dead dad; Michael, last seen standing next to enough C4 to blow up an aircraft carrier; Jin, last seen on the deck of the exploding freighter; Daniel, last seen on a tiny motorboat in a watery borderland between the moving Island and the open ocean

Who is dead?
Michael. Apparently, Michael is dead. I thought there was a chance of a miracle that Michael might survive, but according to Shawna Malcom's TVGuide.com interview with Harold Perrineau, Michael is quite dead, and he may never be seen again on the show. Odd. Very odd.

Do you think that Michael redeemed himself for the murders of Ana-Lucia and Libby by helping Desmond and the Oceanic Six escape? The wages of sin is death, but is dying enough? Was he supposed to do more? Can you let go of your Walt-Michael reunion dream? I'm not sure I can, but post your thoughts in the comments.

Despite all the awesome itemized above, this was such a very sad finale. As Kate said, "All the horrible things that happened that day…" were, in total, overwhelming and awful, and the catastrophe has had devastating effects extending years in the future.

A King Abdicated: It made me sad to see Ben hand over the mantle of Other leadership to John Locke, as much as Ben is twitchy little weasel, he is great at what he does. I wonder if we'll ever see him reclaim the throne.

Dramatic Irony Is Cruel: Sawyer jumped out of a helicopter to save Kate and Hurley. He miraculously survived the fall and the swim without drowning, but when he landed on shore, Juliet pointed out the burning wreckage of the freighter beyond the horizon. Sawyer is left thinking that Kate and Hurley are dead, and he didn't even get to go down with their ship. I foresee a lot of guilt for future Sawyer, and perhaps a return to one of his fallback behaviors, one he shares with Meredith Grey—at least according to her shrink: "You're careless with your life!"

Kate's Sorry: Nonspecific guilt is also doing a number on Kate, and her subconscious is doing a number on her: Dream-state Claire tells her to stay away, but the voice on the dream phone tells her to come back. I think Kate's misery in the future is an extension of the isolated, lonely Kate we first saw get off the transport plane. She doesn't know where to turn, she has no one to lean on, and she's being asked to make major decisions for herself and Aaron seemingly without any reliable, trustworthy friends who could help her work through these issues. So, in the end, all she can do is suffer survivor's guilt alone, and mourn on her lonesome, and try to make a good life for her son.

Our Constant? Dr. Daniel Faraday still knows lots more than he's telling about the Island's effects and properties, and indeed, about the timeline that this story is supposed to follow, assuming no one mucks it up by accidentally tripping a time paradox. I think if Penelope is the short-term rescue solution, Faraday might be the long-term answer. And I think Faraday will get the enlightenment he seeks, but he might have to die for it...

"It's not an Island. It's a place where miracles happen."
—John Locke

"There is no such thing as miracles."
—Jack Shephard

"Lie to them, Jack. If you do it half as well as you lie to yourself, they'll believe you."
—John Locke

"John, why don't you watch this very informative video, and I'll take care of some business."
—Benjamin Linus

"Dude. I've been having regular conversations with dead people. The last thing I need now is paranoia."
—Hugo Reyes

"I'm here to tell you that the Island won't let you come alone...You have to do it together. All of you."
—Benjamin Linus

According to Kristin's sources, our Claire-bear (Emilie De Ravin) will not be a regular in season five, but rather she will be on a "holding contract." However, after her sojourn in the underworld, or wherever she is, she will return to us for season six.

Hmmm…What did happen to Claire?!

Of course, next season is largely about the who, what, when, where, why and how of getting back to the Island, and season six is about what happens when everybody finally returns and reunites.

And Kristin has it on good authority that Jin is fine. Put your minds at ease. 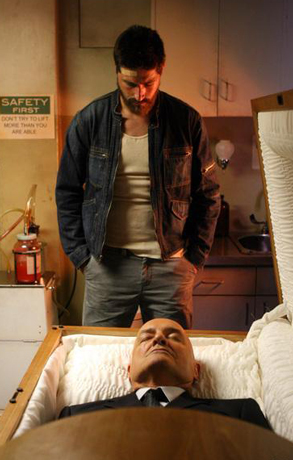 See you on the other side...

TAGS/ Lost
GET POP CULTURED!
*Email entered incorrectly. Please try again.
By subscribing to our newsletter you agree to the Privacy Policy and Terms of Use
Daily
Weekly