2013 Emmys: Our Dream Nominees for Supporting Actor and Actress, Drama 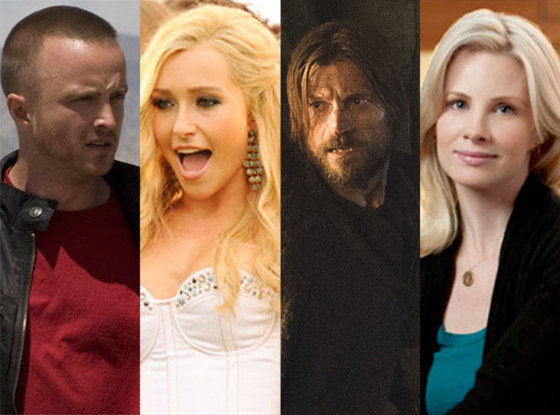 What do the adoptive brother of a clone, the First Lady of the United States and a country superstar have in common? They are all some of the best supporting roles on TV, and are just a few of our dream Emmy nominees for supporting actors and actresses in a drama in 2013.

Leading up to the Emmy nominations announcement on July 18, we're shining a light (and chanting a few prayers!) on our favorite series and stars that we feel deserve to be recognized for their work. So let's discuss TV's best, and sometimes most overlooked, supporting players on the drama side of things, shall we?

Nikolaj Coster-Waldau, Game of Thrones: While Peter Dinklage is more likely to earn a nom (which we are totally down with), we'd love to see Coster-Waldau recognized for showing us a whole new side of Jaime Lannister in season three: Humbled and belittled, Jaime's vulnerable (and truly riveting) side came out in his scenes opposite Brienne.

Giullermo Diaz or Jeff Perry, Scandal: You can't make us choose between these two scene-stealers, you just can't. That's like asking us to choose between a croissant and a donut; we'll just be that innovator that makes a darn cronut! So Jeffermo Dierry for the Emmy?

Jordan Gavaris, Orphan Black: It's hard to stand out on a show when your co-star is playing six different characters like a boss, but Gavaris manages to have a different and authentic chemistry with each of Tatiana Maslany's clones; Felix provides emotional resonance and comic relief, acting as a grounding force for the sci-fi series.

READ: Check out our picks for lead actor and actresses in a comedy!

John Noble, Fringe: "You are my favorite thing." Just thinking about Walter delivering this line to Peter (Joshua Jackson) in the criminally underrrated Fox cult hit's series finale makes us want to climb under over covers and never stop crying. Such is the power of John effin' Noble, y'all.

Mandy Patinkin, Homeland: After he was snubbed last season, we'd hate to see the stellar actor, who is the Showtime hit's emotional anchor, left off the list again.

Aaron Paul, Breaking Bad: Go on, call us bandwagon-ers, we'll wear that title with pride as Paul, who is a two-time winner in this category, is just that darn good. [Insert some sort of witty magnet reference right here.]

READ: Check out the winner of our 2013 finale face-off!

Jennifer Carpenter, Dexter: The series may be named after Michael C. Halls iconic serial killer, but the Showtime hit has always been just as much about Deb's (Carpenter) journey; this was especially true in season seven when Carpenter truly shined as Deb's life came crashing down around her after learning the truth about her brother.

Hayden Panettiere, Nashville: "The Heroes cheerleader is going to face off against Connie Britton aka Tami Taylor aka the most flawless actress currently working? LOL forever!" So said the haters when Panettiere was cast as Britton's rival on the ABC musical drama; fast forward a year and the pint-size actress is hands down the best thing on the series, perfectly walking the line between vulnerable and vitriolic.

READ: Our dream nominees for lead actor and actress in a drama

Monica Potter, Parenthood: Similar to his other series Friday Night Lights, Jason Katims' Parenthood (otherwise known as viewers' weekly therapy session) always seems to be ignored come award season. But it would be downright criminal to overlook Potter's work as a woman battling cancer: Christina's journey was sad, hopeful, beautiful, painful, raw, and most of all, it was human.

Kiernan Shipka, Mad Men: While the AMC drama's adult women tend to be showered with recognition during trophy season, poor little Sally Draper always seems to get the shaft. (How fitting, no?) If Shipka were to be recognized for her work as Don and Betty's tragic daughter, this is the year.

Bellamy Young, Scandal: Who knew President Fitz's (Tony Goldwyn) First Lady Mellie had that in her when she first appeared in season one? The women of Scandal have no time for petty drama (They are dealing with the fate of the free world, people!), especially Mellie, who's too busy scheming, manipulating and delivering epic monologues without breaking a sweat.

Did we miss anybody? Let us know down below!

PHOTOS: Check out the new shows coming to TV in the fall!

TAGS/ Watch With Kristin , 2013 Emmys , Top Stories , TV
GET POP CULTURED!
*Email entered incorrectly. Please try again.
By subscribing to our newsletter you agree to the Privacy Policy and Terms of Use
Daily
Weekly