All bets are off becase the name game is finally over!

The royal family welcomed its newest prince on Monday. We saw his precious face on Tuesday. And now we know his name.

PHOTOS: Kate and Wills introduce the royal baby for the very first time 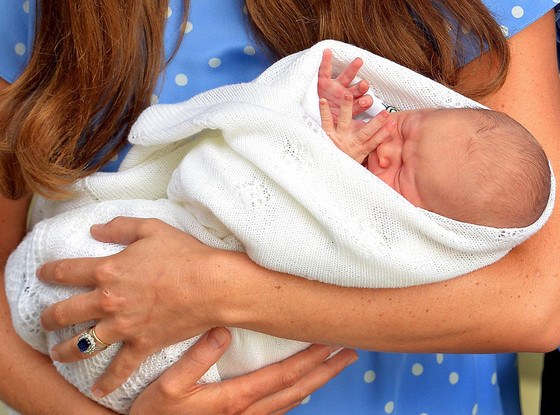 His Royal Highness was born at 4:24 p.m. (British Summer Time) in the Lindo Wing of St. Mary's Hospital in London, weighing 8 pounds, 6 ounces, bestowing the monarchy with its third royal in line to the throne and bringing to a full circle the public's potent fairy-tale fascination that began with the couple's drawn-out courtship and culminated in their storybook wedding in 2011.

As befitting the pomp and pageantry of aristocratic tradition, the baby's arrival—and the eventual announcement of its gender—was heralded via a royal declaration signed by Kate's doctor, taken to Buckingham Palace via police escort, and placed on an easel outside the palace, similar to the protocol that was observed when William was born 31 years ago.

William was by his wife's side when they went to the hospital, he was present during the child's birth and then he spent the night at St. Mary's with Kate and their newborn son.

"We could not be happier," the new dad said following the child's arrival.

The family of three left the hospital the following day, with Will and Kate introducing their baby to the world at 7:14 p.m. (BST).

Both Will and Kate opted not to know their baby's gender, the palace announced in June, and, per British media reports, the Middleton family was informed of the royal baby's arrival at the same time as the queen.

St. James's Palace officially confirmed that Kate was pregnant on Dec. 13, but long before, the public had already been breathlessly awaiting the imminent arrival of a child, heaping massive expectations on a royal twosome whose very coupling embodied the implicit hope and promise that they would produce an heir to the throne.

It was a promise, ironically, that found its humble roots in a relationship that began as anything but a fairy tale.

NEWS: How Kate prepared for the royal baby

After meeting as students at St. Andrews University, where the two started out as friends before eventually becoming flatmates, William reportedly became smitten with Kate at a school fashion show in 2002, and the two would eventually embark on an on-and-off-romance that would captivate the public—a rabid obsession that kicked into overdrive with the couple's engagement in November 2010.

In a significant move that many saw as a validation of Kate's new status as the monarchy's beacon of glamour and symbol of the public's affection, William had given his fiancée his mother's engagement ring, a stunning bauble bedecked with sapphires and diamonds.

On April 29, 2011, the two were wed at a lavish ceremony at Westminster Abbey, where Kate wore a now-iconic lace gown by Sarah Burton for Alexander McQueen, and news of Kate's eagerly anticipated pregnancy arrived a year and a half later.

It was far from an easy pregnancy, however: shortly after the announcement, Kate suffered several bouts of acute morning sickness, forcing her to briefly remain hospitalized and cancel several engagements.

Concerns about the duchess's health and well-being would remain paramount throughout her and William's public and private engagements, and as recently as June 21, Kate opted to back out of attending a friend's wedding in Northumberland, England, amid fears that she could go into labor early.

Following the birth of their child, Prince William is expected to go on a statutory paternity leave from his post with the Royal Air Force, where he's been on active duty as a search-and-rescue helicopter pilot.

The new family will be making their home at their newly refurbished apartment at Kensington Palace, and they'll reportedly move in either in September or October.