Once Upon a Time Bosses Dish on Peter Pan and Season 3's Epic Adventure: "We're the Dysfunctional Avengers!" 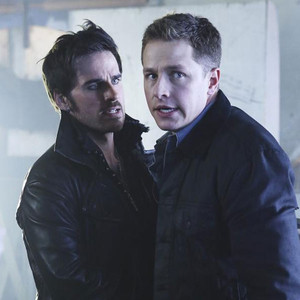 Once Upon a Time closed out its stellar second season with its heroes and villains, including Emma (Jennifer Morrison), Regina (Lana Parrilla), Rumpelstiltskin (Robert Carlyle) and Captain Hook (Colin O'Donohue), boarding a ship to Neverland on a mission to save Henry (Jared Gilmore). Also on the ship? Passenger Tension, lots of!

We chatted with exeuctive producers Adam Horowitz and Eddy Kitsis at the ATX Television Festival in Austin, Tex. this past weekend, where they teased the group's complicated dynamics, jokingly referring to them as the "dysfunctional Avengers," the casting search for new big bad Peter Pan, Emma's feelings for one of her suitors heating up and more...

PHOTOS: Check out the new shows coming to TV this fall, including Kitsis and Horowitz's Once Upon a Time in Wonderland!

"The show is a messed-up family show at its core," Horowitz explains of the decision to end season two with all of its characters forced to work together, "and that's what's great about it for us: how are these characters connected and how can they be related and semi-related."

Horowitz and Kitsis are hoping to use the journey to the new world as a way to peel back more layers to its central characters. "it's about taking new lands, like Neverland, and using it as a way to open up our characters and dive deeper; taking the villains and heroes and throwing them together and forcing them to a common goal as a method for us to dig deeper and find out more about what makes them tick."

PHOTOS: Our dream Once Upon a Time cast!

Aside from family feuds and seasickness, there will also be time for a bit of romance, like some development in the love triangle between Emma, Hook and Bae (Michael Raymond-James, who has been upped to series regular for season three). "It's fun for us to have Emma on that ship with someone as handsome as Hook thinking the person she truly loves is dead, while he's trying to get back to her," Kitsis teases.

The group will have to face a major threat in their journey to save Henry: Peter Pan. Of the search for season three's big bad, Kitsis says, "We have begun the process, but we have begun it secretly! We're sneaky this way!" And while some fans have guessed that the Wraith that appeared in the season two premiere may have been Pan, Horowitz was quick to debunk that theory saying, "We have not seen Peter Pan yet."

One person who has seen Peter Pan? Rumpelstiltskin, who revealed he has a past with the mysterious character. "When someone as scary and menacing as Rumpel is telling you that someone is to be feared, you better listen," Horowitz teases, adding that the backstory between the two characters will be a "slow reveal, but one that will come within those first 11 episodes."

NEWS: Can't remember how season two ended? Catch up by reading our recap of OUAT's finale!

Season two saw the introduction of a lot of new characers, including Mulan, Princess Aurora, Tamara and Greg, to name but a few, but Kitsis and Horowitz are shifting the focus back to the core characters in season three, with Kitsis saying, "It's really about this journey and it's really about these characters and we really want to dive back into our core characters. There's things left to be explored."

Like Emma last year found out she had magic. She's not had a moment to contemplate why. So for us, another question for Emma is:She saved everyone else' happy endings, but what about her own? We really want to dive into these characters," he continues, adding that fans will learn more about Prince Charming's (Josh Dallas) past. "I want to know more about Prince Charming. He was really good with a sword, but he was a shepherd. Well, there's a chance he probably left home before he came back."

Once Upon a Time returns to ABC this fall Sundays at 8 p.m.

Are you excited for season three? Who do you think should play Peter Pan? Sound off in the comments!

TAGS/ Watch With Kristin , TV , Top Stories , Once Upon A Time , Exclusives
GET POP CULTURED!
*Email entered incorrectly. Please try again.
By subscribing to our newsletter you agree to the Privacy Policy and Terms of Use
Daily
Weekly