Rider Strong to Guest Star on Girl Meets World? "We're Talking About It!" 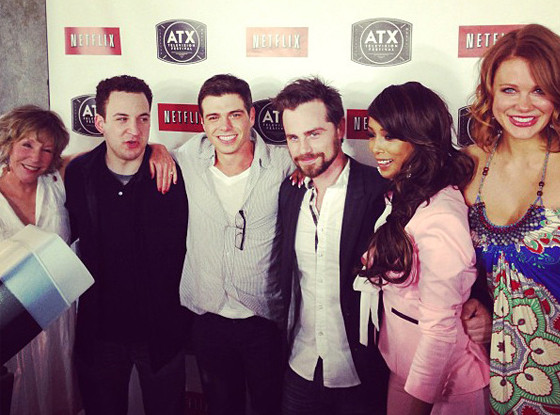 Were you one of the Boy Meets World fans left heartbroken when it was announced that Rider Strong would not be returning as fan-favorite bad boy Shawn Hunter on Girl Meets World, Disney Channel's highly anticipated reboot of the beloved '90s show? Well, prepare to sit down, squeal and/or swoon 'cause we've got some very good news for you!

"I feel like I should show up at some point and finish the storyline," Strong exclusively told us on the red carpet at the ATX Television Festival in Austin, Texas, when we asked if he'll be making a guest appearance should the pilot be picked up to series. "We've been talking. I just want it to be done right. I really want it to be classy and good. I want it to be something that makes the fans proud."

Shawn Hunter back on our TVs?! Yes, please!

Of his potential guest appearance, Strong continued, "It really depends on what the show is going to be. It has to define itself and it has this weird challenge of appealing to a new audience, but then also appealing to the old Boy Meets World audience. I don't know how they are going to pull that off."

So what does Strong think Shawn would be up to should viewers see him appear on Girl Meets World? Hijinks with BFF Cory (Ben Savage), who is now a father of two, of course! "We've talked about it a little bit. I think he's got to be in trouble of some kind and he's got to pull Cory into trouble. That's definitely the way it's going to be because that's always how it went," he explained. "I'd like to see him happier. I feel like Shawn was destined for tragedy. I mean, gosh, they killed my father, my mother abandoned me, my girlfriend and I broke up at the end of the show. They really just made Shawn's life hell. It would be good if he's in trouble but in general is happy."

When news of a Boy Meets World spinoff hit, the response was pretty insane...almost broke-the-Internet level of insane, really, something Strong admitted has been "overwhelming," saying, "This last year has been kind of weird. It seemed like we slipped through the cracks and had gone the way of most ‘90s shows, where it's like we're not really talked about, which I have to say was kind of relaxing in my personal life to not be recognized in the streets so much anymore. So then apropos of nothing I actually did, this last year has been all Boy Meets World all the time. It's been overwhelming, but really great!"

PHOTOS: Another blast from the '90s past—Saved by the Bell flashback time!