Spoiler alert! We're about to dig into the biggest, most jaw-dropping moments from Thursday night's TV. If you haven't yet watched a particular show, and don't want to be spoiled, skip to the next!

NEWS: Vote in the final four of our Girl on Top tournament!

Glee:  While Schuester (Matthew Morrison) oh-so-casually reveals he and Emma (Jayma Mays) are getting married (for real this time) after Regionals, the seniors are readying their post-McKinley lives. Brittany was accepted early to MIT, Tina is thinking about vet school and Artie got into the Brooklyn Film Academy, but doesn't want to leave his mom, played by guest star Katey Sagal, alone. "You're going," she tells him, giving him the push he needs to pursue his directorial dreams.

But Blaine (Darren Criss) had the biggest post-grad plans of all. After a few mentions of marriage equality throughout the hour, Glee drops a proposal bombshell: "I wanted to formally ask for your permission to ask Kurt (Chris Colfer) to marry me," Blaine says to an officially cancer-free (Yay!) Burt (Mike O'Malley). "Kurt is my soulmate...I know that if I get him back, I have to do something bold." Too bad Burt is not down with teen marriage, but he is down with Klaine being together. Something tells us Blaine is going to go through with this proposal anyway...

The Vampire Diaries: The show finally welcomed back Elena's (Nina Dobrev) humanity, thanks to a brave act from resident human Matt Donovan (Zach Roerig)! After several failed attempts to bring back her humanity, Damon (Ian Somerhalder) does it in classic Damon fashion: Snapping Matt's neck! Thankfully, he's wearing the Gilbert family ring, so he comes back to life, bringing Elena's humanity to the surface with it. Alas,  the pink streaks seem to be staying.

NEWS: Get the latest TV scoop with our Spoiler Chat!

Parks and Recreation: Baby on board! Andy (Chris Pratt) found a positive pregnancy test at Ron's (Nick Offerman) cabin, but every woman in the parks department had been there recently, so the suspects were plenty. After an exhaustive search, he came up with nothing, even after Ann (Rashida Jones)—who is not knocked up and pissed about it, joined him. We don't exactly buy Leslie's (Amy Poehler) denial; she was in the middle of being torn apart by a crowd of Pawnee residents and her husband was starting at her in shock...not exactly the best time to admit you're expecting. But we digress. 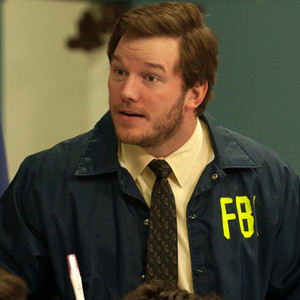 At the end of the episode, Andy was complaining to Ron about how he couldn't solve the mystery about the pregnancy test left behind at his cabin when Ron's girlfriend Diane (Lucy Lawless) came in asking if they could talk in private. We end on Andy's shocked face. Cliffhanger! All signs point to Ron's boo being knocked up, but it could be a red herring.

Elsewhere in the episode, a lawyer approaches Tom (Aziz Ansari) because his very rich client wants to buy his Rent-a-Swag business, which has been booming. After much deliberation, Tom turns it down, and the lawyer informs him that his client will then open a competing chain right across the street. Oh, and April (Aubrey Plaza) got into vet school in another city, which means she'd be away from Andy. Do you love these season six storyline set ups as much as we do?

NEWS: Find out who went home on American Idol!

Grey's Anatomy: Fans were in for a major shock when Jo (Camilla Luddington) showed up at Alex's (Justin Chambers) place bruised and beaten after a fight with Jason (Charles Michael Davis). Woah. Raise your hand if you did not see that coming. Now raise your other hand if you want Alex to kick his ass.

Scandal And the love triangle continues! Though Mellie (Bellamy Young) is threatening to tell the press about Fitz's (Tony Goldwyn) affair, he still chooses Olivia (Kerry Washington) over his presidency. Alas, Mellie was not bluffing and gives an interview to James (Dan Bucatinsky) revealing Fitz's betrayal! But who cares when Fitz and Olivia are finally together?!

Liv also shared a moment with Jake (Scott Foley) earlier in the ep, with him asking about her relationship with Fitz. "How deep are you in with him?" Her response? A steamy kiss, before denying anything is going on between her and Fitz. You do you, girl. You do you!

Line of the Night: "You were out there and you weren't looking for me?!" Troy (Donald Glover) says to Abed (Danny Pudi) on Community, which featured the study group's origins story.

Bonus Line of the Night: "You want me? Earn me," Olivia tells Fitz on Scandal, prompting massive cheers in our office. "Sit with me and watch me choose you. Watch me earn you," he later tells her, earning even more applause from us. We're fickle, we know. And their trademark "Hi" in the shower? We're writing this from beyond the grave, folks!

What did you watch on Thursay? What was your favorite TV moment of the night?

PHOTOS: Check out all the latest TV scoop