Lindsay Lohan's Wild 24 Hours: What Has Stopped Her From Checking Into Rehab 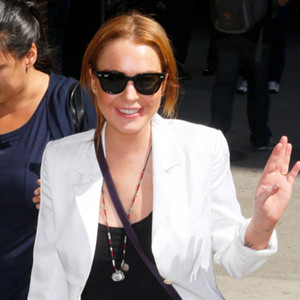 The last 24 hours have been quite a whirlwind for Lindsay Lohan.

The 26-year-old actress was supposed to check into a judge-approved, live-in treatment program by 8:30 a.m. Thursday morning. That didn't happen because, well, there were quite a few hiccups along the way.

Let's take a look at the play-by-play.

PHOTOS: Inside Morningside, where Lindsay was expected to check in Thursday morning

Wednesday Night, Lindsay Missed Her Flight: Linds was expected to hop aboard a flight from New York's JFK International Airport to Los Angeles. However, a source confirmed to E! News that the Mean Girls star missed this flight.

But a Friend Came Through With a Private Plane: It pays to have friends with money! Fortunately for Lindsay, a friend chartered and paid for a private cross-country flight. A source told E! News, however, she "even showed up superlate" for this NYC to LAX overnight jaunt. Still, she made the flight.

Thursday Morning, Things Were Looking Good: The plan was for Lindsay to go straight from the airport to Morningside Recovery in Newport Beach, Calif. As of 6:40 a.m., a source told E! News her private flight had not yet landed. Then, just in the nick of time, Lindsay and her crew touched down in L.A.

But Lindsay Needed Some Last-Minute Rehab Supplies: Namely, an iPad. So, Lindsay dropped by Fry's Electronics in Fountain Valley, Calif., to purchase said Apple product. She was spotted sitting on the ground outside the establishment, drinking coffee, not appearing to be in a rush to check in anywhere.

Then It Was Time to Face a Judge: At 8:30 a.m., Lindsay's lawyer Mark Heller appeared on her behalf before Santa Monica City Attorney Terry White and Judge James Dabney. Her attorney said Lindsay was "ensconced in the bosom of that facility right now. She is already there. She is already accepted." The judge was not pleased by this due to the fact that Lindsay, her attorney and the court had decided on April 9 that she would attend a facility in New York. Heller explained that because of paparazzi concerns, Lindsay opted to switch to Morningside. Judge Dabney deemed this "very inappropriate" and noted, "We did not approve this facility. I do not know anything about this facility and he shows up five minutes before this hearing and shows me a letter."

But the Plea Deal Seemed a Little Flexible: At least, at first. The judge ended the hearing saying Lindsay could remain enrolled in Morningside, but that prosecutors were entitled to conduct due diligence on the new treatment center. After the hearing, however, the Santa Monica City Attorney told E! News if his office found Morningside doesn't meet the requirements of Lindsay's court-mandated sentence, he would ask the court to have her start her rehab all over again somewhere else. He also pointed out three newspaper articles reporting Morningside as receiving bad marks, including one story noting it had been suspended by the state of California. (Mary Helen Beatificato, CEO of Morningside, released a letter acknowledging the facility's ongoing battle with the City of Newport Beach. She added: "Morningside continues its fight because it believes in what it does and in the approximately 400 people who come to Morningside each year for help and hope.")

NEWS: More on Lindsay fleeing rehab amid this media circus

Around 10:30 a.m., Lindsay Arrived at Morningside: Yes, according to a source, a vehicle transporting Ms. Lohan arrived at the facility just before 10:30 a.m. However, Lindsay did not actually get out of the car and left shortly thereafter.

Now, We're Not Quite Sure: Lindsay's precise whereabouts, as of Thursday afternoon,  are unknown. A source told E! News Lindsay has not been in contact with her attorney for the past few days. "[Her attorney] is doing his best to protect her, but she won't listen to anyone," added the source.

As of Thursday afternoon, a warrant had not yet been issued for Lindsay's arrest, despite the apparent violation of her plea deal. Her attorney did not respond to E! News' requests for comment.

TAGS/ Top Stories , Legal , Lindsay Lohan , Rehab
GET POP CULTURED!
*Email entered incorrectly. Please try again.
By subscribing to our newsletter you agree to the Privacy Policy and Terms of Use
Daily
Weekly