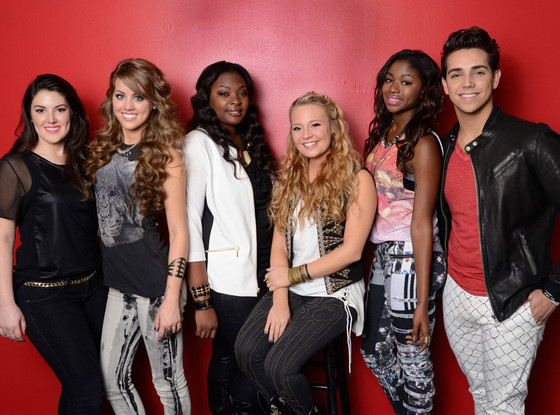 A week after admiring Janelle Arthur's rhinestone-studded pair (and then literally walking away with them), the rapper has returned them to their rightful owner. But, as Janelle told us backstage after Wednesday's Top 6 performance show, she didn't get her wish to confront Idol's harshest judge herself. "I didn't get them," Tennessee's country sweetheart said. "The production people had to go get them!"

While Janelle was psyched to have her custom-made boots back ("they're mine!" she exclaimed), she admitted to feeling deflated by the not-so-glowing critiques from Nicki and the other judges. "Of course I'm down," she said. "I've been down. Because in my head, I know where it's headed. I'm not down because I may be eliminated at some point. I'm not down about not winning. I'm just down about feeling like when you feel like you give your all, you want it to be appreciated."

Candice Glover, who literally had Keith Urban bowing down on the floor in praise after her scorching, show-closing performance of The Cure's "Love Song, was in a way better mood. With her make-up touched back up after she broke down and had herself a good "ugly cry" onstage, the South Carolina powerhouse couldn't get over the fact that she'd gotten glitter-bombed by judge Mariah Carey. And truth be told, we couldn't either: We thought Mimi would've given those things up after Glitter bombed at the box office. (We kid!) Still, we had to get the scoop: What was that onstage glitter shower all about? "I don't know why she had that!" Candice told us. "But [the glitter] was in this little box and [after the show], she gave me the box. She was like, 'This is what I carried it in, dah-ling.' I was like, uh, ok. But if Mariah Carey throws glitter at you, it must be something good!"

But this sweet story Candice shared with us was even better: "I remember being in sixth grade and getting in trouble in the hallway for singing Mariah Carey songs too loud," she said. "And now she's hugging me and telling me she loves me." Awww.

Things got even sweeter when Amber Holcomb, who did her best Beyoncé tonight with "Love on Top," gave us an update on her burgeoning romance with last week's eliminated contestant, Burnell Taylor. It seems that Burnell and good bud Candice were sneaking in a little FaceTime before the show, and naturally, Amber couldn't help but chime in. "We saw each other," she said with a smile. "We were like, 'Hey.'" But for the record, there was no kissing of the computer screen. "It's not the same!" Amber told us with a laugh.

No wonder she's looking forward to seeing Burnell again on this summer's Idol tour! "We're really gonna have time to see each other then," Amber said. Added bonus: "We're not gonna be in competition with each other, and nobody's leaving anytime soon!"

Someone will, however, be leaving the competition Thursday night. Will it be Lazaro Arbos, who took a verbal lashing from the judges again tonight, or will a loyal legion of Lazaro fans once again save season 12's final guy? Or might we be in for a shocker, with one of the girls getting the lowest number of votes? If that's the case, do you think the judges will finally use their one save? Hit the comments below and let us know!