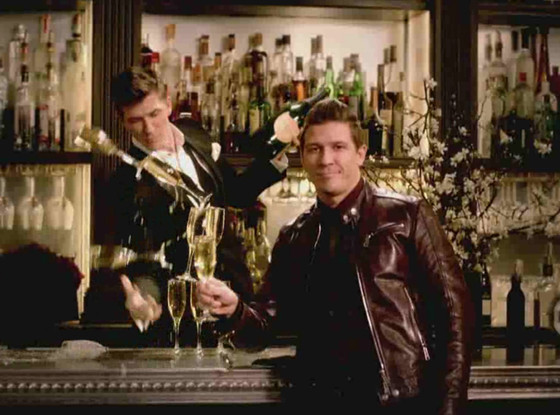 Playing with Fire is bringing the heat to E! The show features entrepreneurial bad boys the Koch Brothers, along with high-powered players in the New York culinary scene, like Julie Elkind, Candice Kumai and Anna Boiardi. We get to see what really happens behind the scenes of the cut-throat restaurant industry and find out if these five stars can handle the pressure.

The premiere of Playing with Fire was packed wall-to-wall with excitement surrounding the opening of Toy, but we handpicked four of our favorite moments from the episode that encapsulate the mood of the show!

1. Derek Koch Makes His Girlfriend Cry: In the world of the Koch Brothers, making sure the "toys" are perfect for the opening of their restaurant Toy takes precedent over the everlasting love of a soul mate. After accidentally booking his girlfriend Molly and himself a flight to Disneyworld on the same night of Toy's opening, Derek can't stop the teary floodgates from bursting open when Molly confronts him about it. Thankfully he puts out the fire by assuring her he's already re-booked the flight and will never, ever, ever, ever do something like this again. (Never ever). (Until probably the next episode).

Meet the stars of Playing With Fire

2. Restaurant Tycoon Todd English Shoots a Gun at His Party: Todd English threw an amazing party for the anniversary of his restaurant Olives. The celebration was filled with great food, music, dancing, and him standing on a balcony firing a (fake) gun. Everyone was momentarily terrified, except for the Koch Brothers, who thought it was hilarious.

3. Julie Elkind Has a Panic Attack Over Cheesecake: After taking on the challenge of coming up with a new featured desert for the fall menu at BLT, Julie Elkind, to the dismay of her colleagues, decides to stray away from the dessert that sold out last year, the pumpkin cheesecake, and try something new: the maple cheesecake. As you can imagine, it's the most dramatic thing in the episode. At one point she says, "I do not take failure very well. If they don't like the maple cheesecake… then what?"  Um...off the top of our heads... maybe make the pumpkin cheesecake?

4. Anna Boiardi Challenges Her Mom to a Sauce Competition: The traditional sport of Saucing didn't quite make it into the Olympics this year, but Anna Boiardi brought it to mainstream attention in the premiere of Playing with Fire. After her mom continually nagged her about the way she was making her sauce for a dinner party, Anna was left with no choice but to invoke the ancient challenge: a sauce-off.

TAGS/ Top Stories , Recaps , TV
GET POP CULTURED!
*Email entered incorrectly. Please try again.
By subscribing to our newsletter you agree to the Privacy Policy and Terms of Use
Daily
Weekly