Spoiler Chat: Scoop on Glee, How I Met Your Mother, The Following, Mindy Project and More! 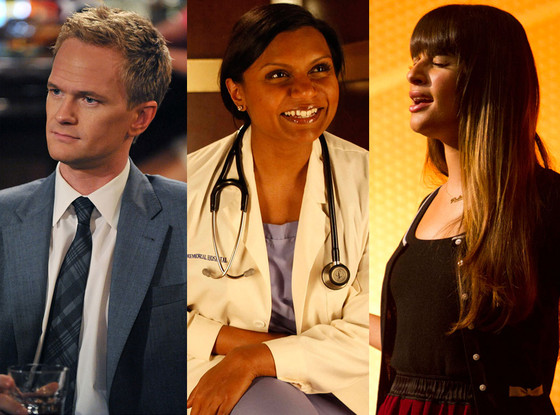 What, you want to talk about something other than the Veronica Mars movie? Nerds!

Since we live to please, we guess we can offer you some scoop on TV shows currently on the air, like what's ahead for Rachel on Glee, who Barney will be waging war against on How I Met Your Mother and a new love triangle forming on The Following. And we suppose we can tell you about the bad side effect of one Mindy Project romance, a new hottie coming to Pretty Little Liars and more in today's Spoiler Chat, so let's just get right to it, shall we?

Des: Any Arrow scoop?
Good news, Roy Harper fans: The CW hit has bumped Colton Haynes up to series regular for season two! Of his potential to eventually become the Arrow' sidekick Speedy (as in the comics), executive producer Marc Guggenheim says, "We're going to see more of Roy in season one, and some glimmers of where his potential could be." Translation: Tights are probably in his future!

Get caught up on the latest TV scoop with our Spoiler Chat!

Leaheartcory: What can you tell me about Finchel in the upcoming episodes?
Sorry, but it seems like Rachel might be too busy becoming a Broadway star to focus on her love life right now! Expect to meet a Broadway producer in Glee's 19th episode, one who could be sticking around for some time.

Lyndsey: PLL scoop please!
In episode two of the fourth season, which we can reveal is called "Turn of the Shoe," fans will meet a very attractive martial arts instructor named Jake, who is patient, sensitive and insightful. Any guesses on which of our Liars will take an interest in his Zen-like tranquility?

J5fan1: I'll take any spoilers you have about my favorite #HIMYM couple, Barney and Robin, please
Prepare for battle! Barney and his father-in-law-to-be will be going head to head toward the end of the season in ultimate laser tag showdown. Expect to see Barney and Robin Sr. corral unwilling kids to be part of their armies. It shall be awesome. WesleyPomatto: Enough about Glee spoilers. What's going on with Happy Endings' future? Will it ever air again?
Though ABC has yet to make a decision regarding the gang's fourth season, the show is not canceled and returns on Friday, March 29, and will be airing back-to-back episodes. Yes, that means a full hour of awesomeness. Oh, and there will be a wedding in the season finale.

Eamonn: The Following is getting so intense! Any scoop on Emma and Joe? What happened to Jacob?!
Well, Valorie Curry tells us Emma's relationship with Joe is "everything" to her. "He is sort of the twisted father figure, because he did essentially raise her to be the person she is, but she's been in love with him since she was 16 years old. Both of those things are wrapped up together for her, so as I said, it's a really very complicated twisted feeling that she has for him." But Curry does say "her feelings for Jacob are definitely genuine and she loved him." Is a new love triangle forming?!

Find out what the cast of Veronica Mars has been up to!

Christina: You never give us any Hell on Wheels spoilers!
The AMC series is currently looking to fill a new series regular role: Louise Ellison, a pretty and independent woman who is the star reporter for the New York Sun and who is covering the building of the Transcontinental Railroad.  Louise is also smart and flirtatious, something she uses to her advantage.

BeeBee: I love Mindy Project, but am kind of upset that my love Jeremy doesn't get much to do each week. Will he get some cool storylines soon?
If you truly love Jeremy, then you won't mind a fat Jeremy, will you? Near the end of the season, Jeremy gets a new girlfriend, and as expected in new relationships, he puts on some weight. The thing is, he is the only one who doesn't notice his extra poundage. But don't worry, Danny and the rest of the gang have absolutely no problem pointing it out to him. The term "Jer's Jelly Belly" is used. We'll just leave it at that.

See the stars at PaleyFest

TAGS/ Spoiler Chat , TV , Top Stories , Exclusives , Watch With Kristin
GET POP CULTURED!
*Email entered incorrectly. Please try again.
By subscribing to our newsletter you agree to the Privacy Policy and Terms of Use
Daily
Weekly