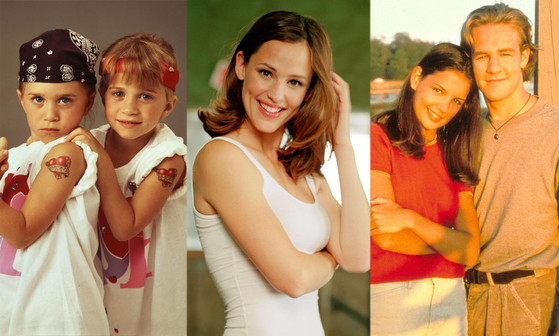 Even though Friends boss Marta Kauffman totally shot down any chance of a Friends reunion or comeback season ever happening, that doesn't mean we'll stop dreaming of a day where Jennifer Aniston, Matthew Perry, Courteney Cox and the rest of the gang get together for some coffee in oversized mugs at Central Perk again.

Perhaps we can take it to the big screen? After all, fans totally funded a Veronica Mars movie reunion in record time, so who is to say that we can't make that happen for Friends? This is why we need to see what those New Yorkers have been up to, plus four other TV movie reunions we'd totally fund right now:

1. Friends: They promised they would always be there for us! And now they've all gone off to do other TV shows and become big-time movie stars (one of them did that, at least). We want—nay, need to see how Monica (Courteney Cox) and Chandler (Matthew Perry) are doing in the suburbs. And no, the Go On reunion doesn't count. Maybe Ross (David Schwimmer) and Rachel (Jennifer Aniston) can finally have that dream wedding they pretended to have in season eight? There's your basis for the reunion. Boom. You're welcome, Hollywood.

NEWS: Get the latest TV scoop with our Spoiler Chat!

2. Full House: Since Boy Meets World is getting a sequel, shows from the '90s are all the rage right now. They most likely don't all live in that same house anymore, but maybe Danny (Bob Saget) decides to sell it, which brings everyone back together to say goodbye to their memories one last time. Wait, if Danny is selling the house, does that mean Uncle Jesse (John Stamos) will be evicted since he lived in the attic? See, these are the questions that need answering!

3. Alias: Jennifer Garner can take a break from her movie career to slip back into her red wig, right? We miss her kicking ass! If fans proving they can raise crazy amounts of money in a short amount of time doesn't convince the cast to get back together, then we can just remind them of this moment.

4. The Wire: Fans and critics alike call it one of the greatest TV series of all time, and they all insist it was taken from them too soon. It'd be great to check back in with Jimmy McNulty (Dominic West), Beadie (Amy Ryan), Bunk (Wendell Pierce), Bubbles (Andre Royo) and—if only!—Omar (Michael Kenneth Williams) and Stringer Bell (Idris Elba). Oh, and we'd still like to exact some revenge on the murderous drug kingpin Marlo (Jamie Hector), because he is so awful, so evil and so compelling to watch.

See the stars at PaleyFest

5. Dawson's Creek: Joey (Katie Holmes) picked Pacey (Joshua Jackson). The gang said an emotional goodbye to Jen (Michelle Williams). And Dawson (James Van Der Beek) was about to meet his idol, Steven Spielberg. The Dawson's Creek finale did a lot of things right, but it wouldn't hurt to pop back over to Capeside to see how everyone is doing. Imagine this: Jen's daughter Amy is doing a school project about her mother in high school, and needs to get in touch with Joey, Dawson and Pacey. There, we started the movie. Your move, Kevin Williamson.

But those aren't the only TV series we'd fund. Here are some other television casts we'd just die to see reunited on the big screen. Take our poll and maybe the next kickstart campaign could be for the TV movie you voted for!

TV Movie Reunions
Which TV movie would you fund?

Is your dream movie reunion not in our poll? Tell us in the comments!

Find out what the cast of Veronica Mars has been up to!