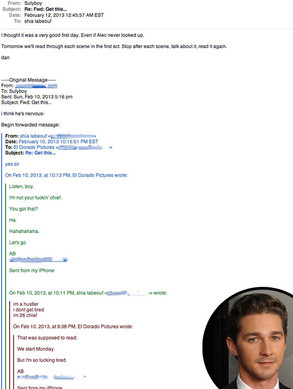 A day after Alec Baldwin derisively compared the 26-year-old Lawless star's theater experience to a "celebrity chef," LaBeouf fired back by leaking two more emails that purport to portray the Hollywood veteran as less-than-dedicated to rehearsals for their Broadway show Orphans.

Of course, the pair were set to costar in the play—that is, until the younger thesp beat a hasty exit, citing "creative differences," then bizarrely posted on Twitter several email exchanges between himself, the revival's director Daniel Sullivan, Baldwin and fellow castmember Tom Sturridge that showed plenty of drama behind the scenes.

So what set Shia off this time?

Well apparently he was none too pleased with some quotes the 54-year-old Baldwin gave to Vulture when asked about LaBeouf's subsequent tweet in which the latter wrote, "The theater belongs not to the great but to the brash."

Said the 30 Rock star: "Some of the greatest movie stars had really serious theater careers and still do. And many film actors, though, who are purely film actors, they're kind of like celebrity chefs…You hand them the ingredients, and they whip it up, and they cook it, and they put it on a plate, and they want a round of applause. In the theater, we don't just cook the food and serve it."

He continued: "You go out in the garden and you plant the seeds and you grow it…it's the opposite of film acting. It's a much more intensive and kind of thoughtful process.…And there are people who that's just not their thing. So for those people who I think it's not their thing, I'm not really interested in their opinion of it."

Keeping his epic Twitter battle with Baldwin going, LaBeouf's first tweet related an email conversation he had with Sullivan in which the stage veteran informed the thesp he "thought it was a very good first day" of rehearsal, "even if Alec never looked up" from the script.

That came in response to an email chain LaBeouf forwarded to Sullivan which clearly revealed tension between the two stars.

"We start Monday. But I'm so f--king tired," confessed Baldwin.

That brash declaration didn't go over so well with the Golden Globe winner who promptly set him straight.

LaBeouf simply responded, "yes sir," then forwarded the terse tête-à-tête to Sullivan with the remark, "I think he's nervous."

Shia followed this with a one-word tweet in which he wrote "Chef," an obvious reference to Alec's prior remarks, followed by a screengrab of a second email exchange in which Sullivan told LaBeouf not to be too surprised if Baldwin stayed on book in the early going.

"I suspect he's not nearly as prepared as you are. Not unusual at all when actors have a good long rehearsal time like we have. I just don't want it to throw you. I did a reading of another play once with Alec and about 10 minutes in I thought, 'Oh, I guess he's just going to read it,'" wrote Sullivan.

A rep for Baldwin declined to comment. However Baldwin previously told the New York Times he was "very disappointed" about LaBeouf's behavior in revealing communications that everyone expected to be private.

Here are some other Hollywood stars who've hit the boards