Argo Slammed by Ken Taylor, Ex-Canadian Ambassador to Iran, as "Totally Taken Over by Americans" 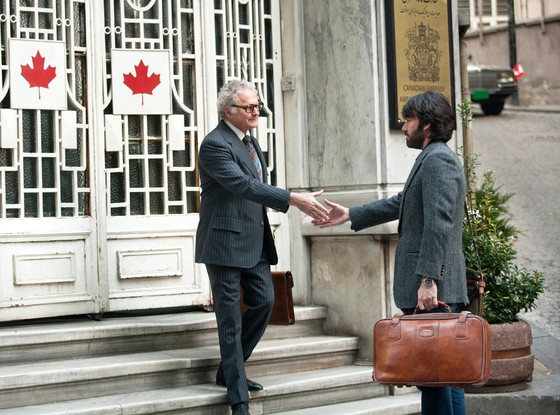 It's a little late to hurt Argo's Oscar chances at this point, but Ken Taylor doesn't intend to let the Ben Affleck-directed film win Best Picture in peace this Sunday.

Pinpointing historical inaccuracies in this year's crop of Oscar nominees has been quite the sport these days, be it the wrong senator voting against the 13th Amendment in Lincoln or the major uproar from Washington, D.C., over the torture depicted in Zero Dark Thirty.

And, albeit somewhat more quietly and politely, Taylor—the former Canadian ambassador to Iran played by Victor Garber in the film—has been banging the drum for what he perceived to be a huge slight toward his role (and his country's) in the rescue of six Americans during the Iranian hostage crisis in 1979.

"In the movie, Canada and Ottawa didn't exist," Taylor told the New York Times' Carpetbagger blog. "It's a great film, it's great. But at the same time, it was a Canadian story that's been, all of sudden, totally taken over by the Americans. Totally."

"I don't want to be hard on Tony Mendez," he added, referencing the CIA agent played by Affleck who led the covert op. "I want to give him all the credit I can. But at the same time, I'm a Canadian, and enough is enough."

Taylor also told the Associated Press today that it would be "a further reflection" on Affleck if Argo wins Best Picture and he fails to thank the Canadians who played such a huge role in the real-life version of events.

See the 10 best-dressed stars ever at the Oscars

Jimmy Carter, who was president of the United States at the time, said on Piers Morgan Tonight yesterday that, while he was hoping for a big night for Argo at the Oscars, "Ben Affleck's character in the film...was only in—stayed in—Iran a day and a half. And the main hero, in my opinion, was Ken Taylor, who was the Canadian ambassador who orchestrated the entire process."

Taylor, who says he was not invited to Argo's premiere at the Toronto Film Festival last year, said during a talk at Toronto's Ryerson University on Feb. 14 that, "after I saw the movie, I decided that I did bring one particular skill to this movie, that was opening and closing a door.

"We could go on, but the amusing side is the script writer in Hollywood had no idea what he's talking about."

The 78-year-old Taylor did attend a special screening of Argo in L.A. and was interviewed for the bonus features on the DVD and Blu-ray, which came out Tuesday, and he says he was able to address the issues he had regarding Argo's depiction of the Iranian people and other discrepancies he perceived.

With only a few nights to go till the Oscars and with SAG, DGA, PGA and Golden Globe Awards under his belt (to name a few) so far, Affleck wrote to the Carbetbagger that he's "surprised to hear that Ken still has issues about the film, as the last time we had contact was a few weeks ago when Ken asked me to narrate a documentary about the Iran hostage crisis that he is prominently featured in."

"There would be a very compelling film that is primarily about the heroism of ambassador Taylor before Tony Mendez even hears about the crisis—and, in fact, that film already exists (1981's Escape From Iran: The Canadian Caper—starring Gordon Pinsent)," Affleck added. "We weren't interested in remaking that film."