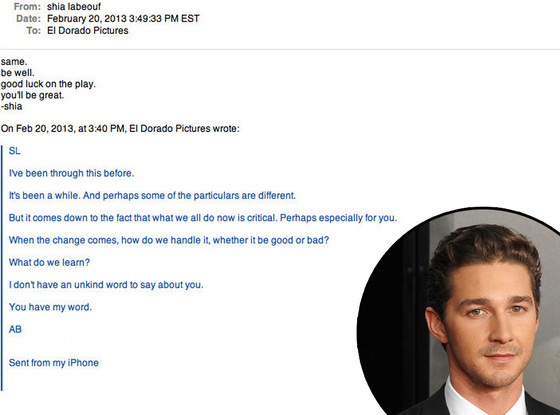 Shia LaBeoufhas cast himself as the lead in a nail-biter of an off-Broadway drama.

Somewhat mocking the "creative differences" explanation that was given as the reason for him leaving the upcoming Broadway revival of Orphans less than a month before previews are set to begin, the actor took to Twitter today to post emails between him; the play's director, Daniel Sullivan; and erstwhile costars Alec Baldwin and Tom Sturridge that indicate something more dramatic occurred behind the scenes.

"Alec, I'm sorry for my part of a dis-agreeable situation," LaBeouf wrote in an email to El Dorado Pictures with a subject line reading, "Apology." In the philosophical missive, the actor also called his dad "a s--t human" and wrote things like "a man owns up," "a man does not know everything" and "a man can tell you he was wrong."

Is Anne Hathaway reprising her Les Misérables role on Broadway?

"I'm too old for disagreeable situations," responded Sullivan. "you're one hell of a great actor. Alec is who he is. you are who you are. you two are incompatible. I should have known it."

"this one will haunt me," the Tony-winning director continued. "you tried to warn me. you said you were a different breed. I didn't get it." Signed, "dan."

Those two emails were attached to a tweet reading, "creative differences." 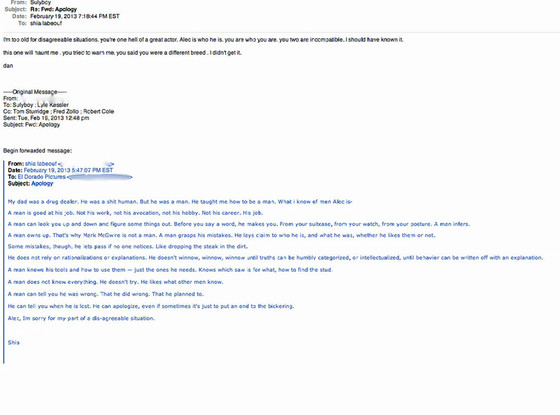 Baldwin's camp declined to comment to E! News, while reps for Sturridge and LaBeouf—who would have been making his Broadway debut in Orphans—have yet to respond to requests for comment.

LaBeouf followed up an hour later with an exchange between him and Baldwin, in which the 30 Rock star assured him, "I've been through this before. It's been awhile. And perhaps some of the particulars are different. But it comes down to the fact that what we all do now is critical. Perhaps especially for you."

"I don't have an unkind word to say about you. You have my word," Baldwin added, signing off as "AB."

LaBeouf replied with, "same. be well. good luck on the play. you'll be great," attaching the exchange to a tweet quoting David Mamet (who is not affiliated with the revival of Orphans): "Acting has become a profession of the genteel class."

Several hours later, the Transformers star tweeted, "Depth of friendship does not depend on length of acquaintance. Tom = good dude - good actor."

Attached was an email from Sturridge, also from today, reading, "I don't really know what to write. I went in this afternoon and they were all there...producers, etc. I said my piece but they didn't really listen. I don't understand what has happened here. Maybe you have had a more enlightening conversation with someone by now. 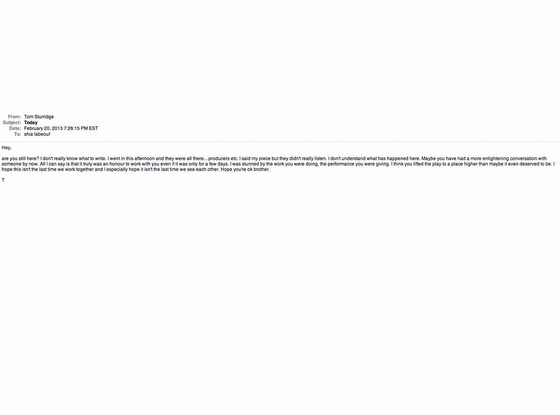 "All I can say is that it truly was an honour to work with you even if it was only for a few days," the Brit continued. "I was stunned by the work you were doing, the performance you were giving. I think you lifted the play to a place higher than maybe it even deserved to be...Hope you're ok brother."

Talk about your dramatic twists. We cannot wait to see what happens after intermission!