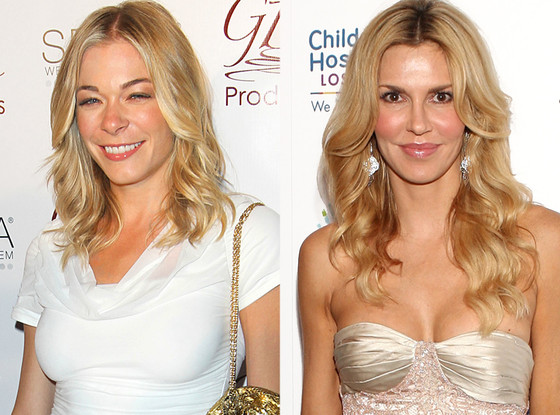 UPDATE: Brandi posted a response to the letter on her Twitter account, "Here is my response 2 the statement my ex's publicist put out about me this am "Go F--k Urself" & u can quote me. #igotmorejobsthenjlobitch"

Brandi Glanville may think LeAnn Rimes needs help, but the country singer's rep counters her statements, saying Eddie Cibrian's ex is the one who could use some treatment.

In the new issues of Life & Style and In Touch, Granville says she's worried for her sons' safety when they're with LeAnn. "LeAnn needs to get help," the Real Housewives of Beverly Hills star said. "She may be unstable and I am concerned; I want to protect [my children]. I want to make sure she's as healthy as she can be."

Rimes' publicist Marcel Pariseau has now come out swinging. He sent a scathing response email about Granville to the tabloids, but they only printed a couple of lines of his very heated words. He released the email to E! News.

Find out what Brandi really thinks of Real Housewives costars

"Brandi might consider getting some help with her drinking," Pariseau wrote. "If you watch her show, read her book and follow her tweets, she is constantly referring to her drinking. Even the title of her book has the word drinking in it. In fact, she was arrested for a DUI. It is a fact that after a night of drinking in Vegas she married her ex-best friend's ex-husband."

He blasts Glanville's past claims that Cibrian doesn't support their children because he's broke after failing to land any new acting jobs.

"In reality he has two films in the can and recurring on two television shows," Pariseau wrote. "She makes it sound like they are scraping by but read her book where she devotes a whole page to what she does to her face; fillers, botox, skin treatments, etc. And just recently on Entertainment Tonight had botox done to her hands. All of that doesn't come cheap. Eddie pays for all of the boys expenses like school, sports, clothing, etc."

Are LeAnn and Eddie having a baby?

Pariseau says it's time Glanville to face the truth.

"Brandi is one of the most narcissistic people around," he wrote. "She never takes responsibility for anything."

He added, "Basically everyone past and present is at fault but no fault lies with her. Read the description of Narcissistic Personality Disorder and tell me what you think?"

"I thought this 'memoir' was to help other women and to empower them?" he wrote. "Do her actions and words resonate with the definition of a role model? I think not!"

In response to the missive, Glanville exclusively tells E! News, "This the most creative and productive Eddie and LeAnn have been in years."

In much happier news, check out what's going down in Hollywood during Oscar Week