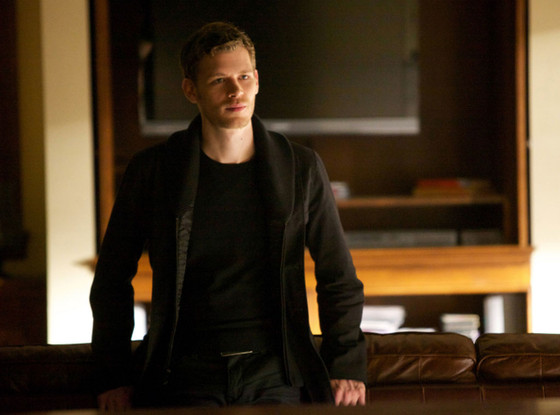 When it was announced that The Vampire Diaries was saying goodbye to big bad Klaus, giving him his own spinoff The Originals, the couple's sizable fanbase was panicked, to say the least. Would the will-they-or-won't-they duo ever go there? Would she visit him in New Orleans? They wanted answers!

Which is why we went straight to the charming Joseph Morgan himself to get all the scoop on Klaroline's future, the episode fans of the couple will not want to miss, TVD's big upcoming death and reteaming with Daniel Gillies for the highly-anticipated spinoff...

Get the latest scoop with our Spoiler Chat

"I can tell you we've done a lot of shooting together. There's still a fair bit of storyline to go between the two characters and things that complicate their relationship even further," Morgan teases of Klaus and Caroline leading up to episode 20, which serves as The Originals' backdoor pilot. "If you can believe that's possible after last week, but they're building a tremendously complicated history already. There's more to come."

And Morgan specifically points out episode 18 as a must-see for Klaroline fans. "Keep watching, episode 18 is going to be a good one. I'm probably going to get some hate mail after 16, but we'll see!"

As for tonight's episode, fans can expect even more Klaus and Caroline drama as he refuses to help her and Tyler (Michael Trevino) translate the code on the hunter's sword. "It's another episode of manipulating and puppeteering for Klaus, but building on the history of last week having almost killed her. We go back, and the idea that Tyler has been kind of gloating, has really infuriated Klaus," he explains. "[Episodes] 13 and 14 was really enjoyable for me to shoot. It was like rehearsing a play. Doing all the scenes on one set, with two actors who I love working with, so that was really fantastic. The other tease I can tell you is Klaus has a piece of information about the cure, which changes everything, so we're really starting to see towards the end of the season now."

Check out the winners of our Top TV Couple tournament!

Morgan says fans should start preparing themselves now for next week's outing, which will see the death of one of our beloved characters, something even the cast and crew are emotional over.

"It's always like an emotional thing for us as well, because we are filming in a world where we see each other all the time, and then suddenly someone isn't a part of that world anymore," he says. "So yeah, it's hugely upsetting for everyone. The episode where it happens and the episode afterwards, are tremendously emotional episodes, so get your tissues ready."

As for the spinoff, Morgan says he first heard of the plans for the series "at the end of season three and we had talked about with it Gillies and with Claire [Holt] before." Fans had speculated about a potential series focusing on the Original siblings for quite some time, "so it was entirely out of the blue, "Morgan admits, but adds, "It wasn't like expected them to come to us with something, in fact I was thinking that at some point I would go to them and be like, 'Hey, do you fancy doing something with this kind of thing?' But essentially they came to us, so it was like a concrete offer came in by the end of season three. Then it took a long time to work out the details. Originally I think they were thinking of setting it in Chicago as well and it took a while for them to thrash out the permits for them and all of that stuff."

Of course, what would the spinoff be without Morgan's onscreen brother Gillies? "I love Daniel,  I was just talking to him an hour ago on the phone. It's going to be brilliant," Morgan gushes. "He was the first actor I played scenes with, and when I joined I thought he was one of the most talented actors watching the show, even after me coming on to it, I'm thrilled. For both of us we've grown a lot leading up to this, and to do this thing we thought it would be really difficult if we both weren't involved."

Morgan teases that fans can expect the spinoff to be "a little more adult, a little more kind of gothic because these are old time Vampires here."

And finally, he says, "It's just so tremendously exciting for me, I'm so eager to get started on it. I really can't wait, and I really hope people like it. I'm going to put my whole heart and soul into it."

The Vampire Diaries airs tonight at 8 p.m. on the CW.

TAGS/ The Vampire Diaries , TV , Top Stories , Exclusives , Watch With Kristin
GET POP CULTURED!
*Email entered incorrectly. Please try again.
By subscribing to our newsletter you agree to the Privacy Policy and Terms of Use
Daily
Weekly