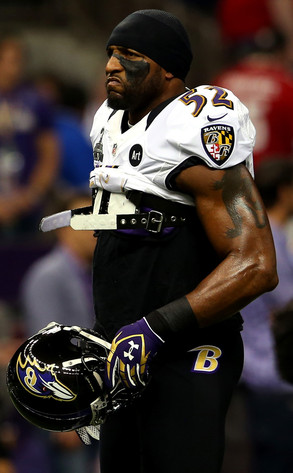 The 2013 Super Bowl is finally here! Got your Antler Spray? How about your Alicia Keys stopwatch?  Who's your favorite Harbaugh brother, the super intense older one or even more intense younger one?

After five months of football and two weeks of hype, its game time in New Orleans for Super Bowl XLVII. Which Harbaugh—Jim with the San Francisco 49ers or John with the Baltimore Ravens—gets bragging rights at holidays?  Will Ray Lewis' last game as a Raven be a blaze of glory, or will Colin Kaepernick's end his debut season on top?

And of course, which ads will take off and which will flop? It's our best and worst of the Super Bowl.

See the biggest controversies of the 2013 Super Bowl

Best Leading Man Trivia: Ray Lewis, the most famous player coming into the Super Bowl, recorded his first career sack 17 years ago on Jim Harbaugh, the 49ers coach. As SB Nation put it: History is awesome.

Shout Out to the Man Upstairs:  In CBS' pregame show, when asked by Shannon Sharpe about the double-murders he was linked to early in his career, Lewis replied "God makes no mistakes."

Looking Devilish: The Mercedes-Benz commercial (a condensed version ran in the pregame show) featuring the Rolling Stones' "Sympathy for the Devil" and Willem Defoe as the Prince of Darkness himself, offering a nebbish driver a chance at a sweet Benz-o and "everything that comes with it," which, we learn, includes Kate Upton.  We especially liked the quick flash of the driver on the cover of Vanity Fair, riding a white—i.e. 'pale'-horse. The ad ends with the "13" in "2013" burning in a spectral flame.

Alicia Keys takes on the national anthem at the Super Bowl

More Devilish Deeds: Ray Lewis blew off accusations earlier in Super Bowl week that he used banned substances during his particularly rapid recovery from a torn tricep early in the year, calling the charges, "The trick of the devil...He comes to distract you from everything you're trying to do." So that's that!

Earliest Betting Upset: Alicia Keys' rendition of the National Anthem, which we clocked at a 2 minutes, 36 seconds—rather than start the clock on the first word, we went with the note of music, since Keyes accompanied herself on the piano. Her time destroyed the over-under line available on some betting websites of 2:15, and broke Jennifer Hudson's 2009 record of 2:30.  But it was Hudson who won the night.

Get the details on Beyoncé's Super Bowl costume 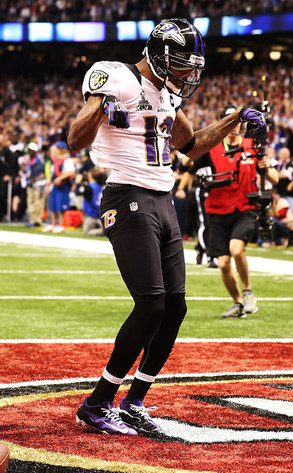 Best Tear Jerker: This one was over early.  Instantly, even.  Just prior to Keyes' anthem, Jennifer Hudson sang "America the Beautiful" accompanied by the kids' chorus from Sandy Hook Elementary and a 100 million pre-game buzzes evaporated in sobs.  It was simple, it was easy and it was completely heartbreaking.

Best Secret Weapon, Ravens: Jacoby Jones.  It took almost two minutes for Jacoby Jones to take over the Super Bowl. On the first play after the two-minute warning at the end of the 1st half, Jones—who had only one touchdown catch in 2012—sprawled out to catch a long bomb from Joe Flacco inside the 49ers 10-yard line, jumped to his feet, spun like an egg-beater away from a would be tackle then froze Chris Culliverwith a stutter step and outsprinted him to the left side of the endz one for a 56 yard touchdown that will live in the annals of both teams. Then, almost an hour later in real-time but less than two minutes later on the game clock, Jones scored a second touchdown when he caught the opening kick-off the second half at the back of his own end zone and sprinted nearly untouched down the field for 108 yards, tying the NFL record for longest scoring play.

All Hail Queen B: Beyoncé silenced the haters with an amped-up halftime show. We saw fire, crazy outfits and a cool reunion with her Destiny's Child bandmates Michelle Williams and Kelly Rowland.

Best Secret Weapon, 49ers: Entergy New Orleans, the electric company.  Down 28 - 6 after Jones' record-breaking comeback, the 49ers were reeling and on the verge of getting blown out, when the lights in the Superdome, well, were blown out. The game was delayed 34 minutes, giving the 49ers a chance to catch their breath after Jones' electrifying return. It appeared to do the trick: Within 10 minutes, the 49ers had seized control of the game, scoring 17 points and deflating any momentum Jones might have given the Ravens.

Pushing The Conspiracy Button: Though CBS reported that stadium officials were blaming the power company, within seven minutes of the lights going out, Entergy's account posted via Twitter: "Power issue at the Super Dome appears to be in the customer's side. Entergy is providing power to the Dome." Calling all Ravens fans: While you looked like you were on your way to an easy victory before the lights went out, you may now go insane.

Biggest Twitter Feeding Frenzy: 49ers Defender Chris Culliver.  The cornerback was already in the social media crosshairs for anti-gay comments earlier in the week, when he said a gay player would not be welcome in the San Francisco locker room, and that he did not "go for that sweet stuff."  After getting burned by Jones on his long touchdown, getting called for pass interference on a key late Baltimore drive and generally getting picked on the Ravens recievers, Culliver was a top 10 trending topic.

Among the most retweeted was Minnesota Vikings kicker and outspoken gay rights advocate Chris Kluwe, who wrote after Culliver's penalty: "Wow, Culliver was all over that guy. I mean, like really grabbing him. Hands everywhere."

Radio host Jim Rome piled on with "You know who's not welcome in the Niner locker room? Culliver. Because he's terrible."

Jay-Z possibly shares a theory on the Super Bowl blackout 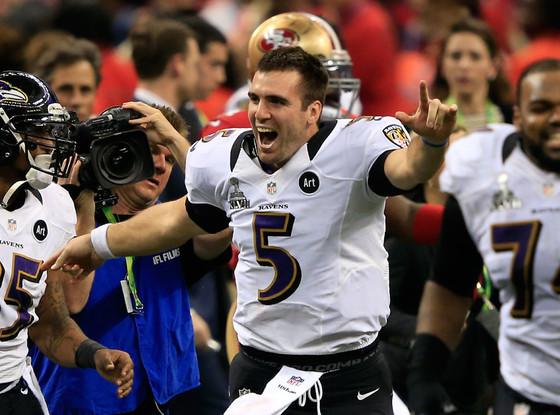 The Stand: After all the delays, big plays and cringe-inducing mistakes, the game came down to Ray Lewis and Baltimore's defense holding the 49ers for two plays on the five-yard line. Trailing by 5 with less than two minutes to go, Kaepernick twice tried to connect with Michael Crabtree, and twice missed.  On the game-deciding fourth-down, Crabtree and Baltimore defensive back Jimmy Smith battled into the end zone, which 49ers fans will swear to their grave was pass interference. Those angry 49ers fans aren't wrong. Smith did appear to keep his hands on Crabtree longer than the rules allow. But Crabtree was giving as good as he was getting, Kaepernick's pass appeared off-target thanks to a fierce Baltimore blitz, and besides—the blackout wasn't enough of a break, now you need an iffy flag? But San Francisco fans, understandably, probably won't soon see it that.

The Trophy Goes To: Joe Flacco took home MVP honors in this oddest of Super Bowls, thanks his three-touchdown night.  Also, he dropped a loud-and-clear celebratory f-bomb on a CBS camera in the minutes after the game.  Great night for Flacco.

Check out these moments from the big game

TAGS/ 2013 Super Bowl , Sports , NFL , Football , Top Stories , Best And Worst , Most Read
GET POP CULTURED!
*Email entered incorrectly. Please try again.
By subscribing to our newsletter you agree to the Privacy Policy and Terms of Use
Daily
Weekly