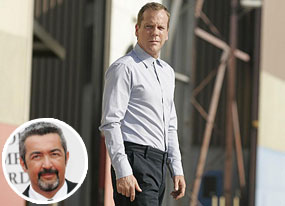 We spoke with 24 executive producer and director Jon Cassar recently to find out what's in store for Jack Bauer and friends in season seven. Read on to find out where they're going, who might be coming back and what they're planning for lady president Cherry Jones.

Apparently, Africa is hard to mimic in L.A. Have you talked about where you might place the action for the next season?
Well, we are still talking about placing it out of L.A., so that's a good sign.

Out of the United States, too?
No, just outside of Los Angeles, but again, it's not only up to us. I mean that is going to be up to the studio, up to the network, because we have a budget [that] expands every year. If you look at the case of Law & Order where there show isn't physically that big, but they've been on for so long that everything gets expanded. We're using the same people; we don't wanna lose our crew, so we pay them a little more. Same with the writers and the directors, so your budget is always going up.

From the studio/network point of view, they're not crazy about that. So, when somebody says we're going to need another $4 million to go to Africa, it's a tough thing for them to swallow. That is part of the reason behind whether we will go or not.

So, it's still going to happen?
Right now Africa is out, but somewhere in the United States is in, but we are right in the middle of writing, so this is the worst timing in the world. From Friday to today, it's changed 100 percent. We're very proud of the show, we've always been proud of the show; the audience loves the show. You guys have been clamoring for questions that we can't answer from the very beginning. And we were crucified at the very beginning. After the first year there wasn't a single press person who said, "I can't wait for the second year; it's going to be great." Everyone took the bandwagon of "They did it one year...its impossible they will ever do it again." "Never" is what they said, and we did it a third year, a fourth year, a fifth...

[Executive producer] Howard Gordon says you guys are going to try and shake things up a bit because he was like, "we don't want it to be just Jack capturing terrorists and torturing them for the answer for a while..." Have you talked about what that might look like?
Well, we've talked about it, but there's nothing for certain.

Can you tell us about Chloe's character and where she will be in the next season?
Um, no because again it changed from Friday to today. It changed so drastically. I was ready to give you guys the goods...

Do we know how far ahead we're jumping?
We're definitely jumping ahead, but probably not too far. Again, the president's [story] is probably going to depend on how far we jump and what her entrance into the story is.

When you chose the woman president, did you think at all how in the real world people would react to that politically, that you were going to be hinting towards pro or con Hillary Clinton?
We've heard that. The interesting part for me about the show is that our writers are split right down the middle. So, we've had one side of politics saying, "hey, look they represent us" and we've had the other side saying, "no, they represent us," and we've had presidents that represented one side, and we've had presidents that represented the other side. That will continue on the show. Only because the writers are so split...I mean our lunchtimes are awesome. We should tape those, and those should be a show.

On my end, as a filmmaker, especially as a director on the show, I personally don't care. I have no political agenda. I'm Canadian, so I really have no political agenda, but basically my whole thing is [making] a good story. I need the president to have a good compelling story. Whatever side of the fence you think that person sits on is...that's going to be up to you. And you should also know we are writing the story as we go, so it's not like there is a great plan of what we want this woman president to do. We know the first situation, and we know how she is going to react. We have an idea what her family is going to do, roughly.

Will we see any returning characters besides Chloe? Will we see Kim Raver? I know she has another show...
Possibly...

People also want Tony back from the dead. We get that a lot.
People don't believe he's dead...

How about Curtis?
You want Curtis back, too? Maybe we'll bring back everyone we've killed, and then we will see what you guys say about us next year.

TAGS/ 24
GET POP CULTURED!
*Email entered incorrectly. Please try again.
By subscribing to our newsletter you agree to the Privacy Policy and Terms of Use
Daily
Weekly