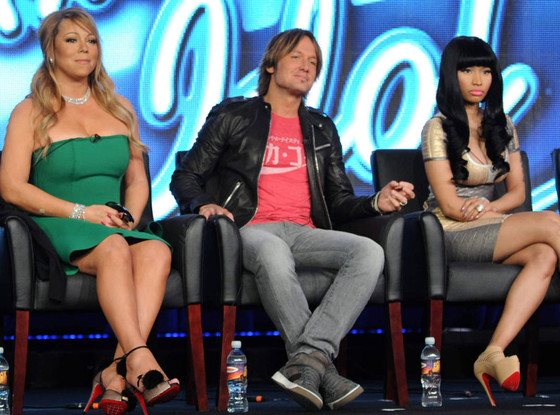 Mariah Carey and Nicki Minaj just faced the press together and one thing is very clear: They are indeed trying to bury the hatchet—right into each other's backs.

Mariah, Nicki and the entire American Idol crew answered tough questions at the Television Critics Association press tour in Pasadena, Calif., and despite the singers' best attempts to dodge questions about their widely reported fight, the tension was thick.

"It was sort of a one-sided thing," Mariah said of the spat.

"No, it wasn't," Nicki shot back, as the two shot each other a heated look, followed by raised brows.

"Well, at least we can agree on my shoes," Mariah quipped.

Mariah, Nick and the twins touch down in Australia

Nicki stayed mostly mum when asked about the fight, saying only, "We are professionals. Haven't you ever been in a fight with someone you work with?"

Mariah had more to say, mostly in an attempt to redirect the panel conversation. "This is a very passionate panel and there are a lot of strong personalities," she insisted. "Starting this process I thought there was the possibility that there was going to be a difference of opinion…The fighting is what it is. This is American Idol. It's bigger than all that. It's bigger than some stupid, trumped up thing. It's about the next big superstar that will come from this show."

When asked how they resolved the fight, Nicki joked that they watched her sex tape. To which Mariah visibly cringed and replied: "There it is. The whole thing is convoluted. It's a distraction from the show and a distraction from the contestants. It's unfair to them. It shouldn't be about any of us, it should be about them. It's not supposed to be about us, it's about the contestants."

Executive producer Nigel Lythgoe explained that much of the tension between judges came from the split votes during the auditions. "When it comes to two and two in the vote, we did it in every city that one of them would carry the vote it across. That didn't always work because two people were always pretty angry about that."

The ladies also seem to have vastly different approaches to judging. While Mariah insisted she "had a hard time saying no" during auditions, Nicki told reporters, "When I watch these shows and someone says yes to someone who clearly doesn't deserve it, it bothers me, it bothers me in my soul. I want to jump through the TV. When I came on, I didn't really have a problem saying no because I felt like we were looking for the best of the best. I didn't like when people were overtly passive about that talent…Everyone's being paid to be here. For me, it was completely different. I don't feel the need to send someone through just because of a great story."

American Idol returns Jan. 16. Check back for more scoop as we are talking to the judges (yes, Keith Urban is here, too!), host Ryan Seacrest and producers later today.

Nicki and Mariah are fashion frenemies!