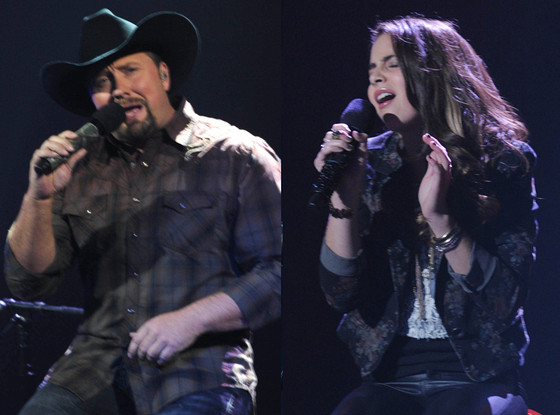 The X Factor's second season is almost over.

Only four acts are left, Demi Lovato is now just an innocent bystander and there are only so many "Simon Cowell is really old and out of touch" jokes left to tell.

So, the competition remained as cutthroat as ever as each of the aspiring superstars performed two more songs apiece with an eye (some eyes more nervous than others) on next week's finale. And, so she indicated herself, Demi could finally get real.

"It's no secret, I guess, that I don't have any contestants in my category left—and it sucks!" she announced before launching into her critique of frontrunner Carly Rose Sonenclar. "But now everyone can totally, fully 100-percent trust what I say because there's no games, no favorites, it's just straight-up honest."

"It's still very predictable," Demi told the 13-year-old phenom, who did things L.A. Reid had "never heard before" with Elton John's "Your Song."

That being said, Demi ultimately called it her favorite Carly Rose performance—and you can bet her roundabout way of getting there annoyed Simon.

"He can't hear, he's really old," Demi cracked, as Simon wondered, "So you did like it?"

In the first round, the judges also unanimously rallied around Emblem3 and, for a change, Fifth Harmony, the latter of which even their mentor acknowledged was the underdog heading into the semifinals.

"To get into the final is going to take a miracle," Simon admitted, "but up against that performance [of Ellie Goulding's 'Anything Could Happen'], like the lyric of that song just said, anything now could happen."

Emblem3, who did a medley that included "Baby, I Love Your Way," had their first $5 million moment, according to L.A. Reid (which is strange, considering he said a few weeks ago that he'd sign them in a minute).

Britney Spears found something lacking in Tate Stevens' take on Craig Morgan's "Bonfire," but Simon applauded him for sticking to his guns and not crooning a "mushy and treacly" ballad just to get votes.

Tate went the more "mushy and treacly" route in round two, however, with Clay Walker's "Baby Fall"—but he did want those supposedly automatic votes, right?

Well, he's gonna get them after his heartfelt, vocally rich performance in honor of his 15th wedding anniversary.

"We've seen you hit and miss on this competition. I feel that was a direct hit," said a charmed-again Britney. Added Simon: "There's about as much chance of you going back to your old job as there is of me flying to the moon tomorrow night."

Which three singers are moving on to The Voice finale next week?

Carly Rose then became the latest singing-competition contestant to try and put an original spin on John Lennon's "Imagine," accompanying herself part of the time on the piano. And, while we can't say her non-Lennon version was the very best, it was more than enough to put her into the finale with ease.

"The only thing predictable about that performance was that it was going to be amazing," praised Demi. But Simon found it "over-complicated," saying that song in particular doesn't need the huge notes.

We never thought we'd say this, but Emblem3 then proceeded to one-up Carly Rose with the Paul McCartney-fronted Beatles classic "Hey Jude." Maybe because there are more of them so it already sounded like a bunch of people were singing along? Regardless, it was a great, youthful version of the song and it made the race for the finale that much tighter.

"You actually are teen heartthrobs like the Beatles," praised L.A. "An A-level performance, you guys should take a bow," offered Britney.

"I think that they're getting there," Demi amended L.A.'s sentiment.

Fifth Harmony then closed the show with a bilingual version of Shontelle's "Impossible"—a risky choice, because they had performed it before. The judges (aside from Simon, that is) didn't let them off the hook, either, with L.A. calling their choice "a little bit lazy."

But maybe America loved it! All will be revealed tomorrow night when the final three are picked to move on to next week's finale.

So, who do you think deserves a shot at winning The X Factor next week? Sound off in the comments!