The Hobbit Early Reviews Are In...and They're Mixed! 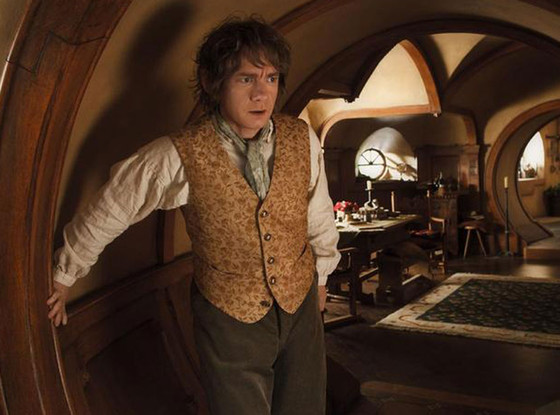 It couldn't be that The Hobbit: An Unexpected Journey isn't a trip worth taking...could it?

While, according to a smattering of early reviews, there is plenty to love about the first of three (an unexpected twist in and of itself!) films through which Peter Jackson is bringing the J.R.R. Tolkien classic The Hobbit: There and Back Again to the big screen, critics aren't kvelling over everything.

In fact, maybe the exhaustively thorough filmmaker would have done himself a favor by practicing a little brevity when it came to the tale of Bilbo Baggins and how he came to acquire that dastardly ring.

Stars collide at The Hobbit world premiere in New Zealand

"The Hobbit alternately rewards and abuses auds' appetite for all things Middle-earth," writes Variety's Peter Debruge, who opines that the entire epic's biggest achievement is technological.

The film, which opens in U.S. theaters Dec. 14, "doesn't offer nearly enough novelty to justify the three-film, nine-hour treatment, at least on the basis of this overlong first installment, dubbed An Unexpected Journey," Debruge further laments, writing that the movie also suffers from "a surfeit of characters."

And that much-buzzed-about 48-frames-per-second cinematography in 3-D? "Consequently, everything takes on an overblown, artificial quality in which the phoniness of the sets and costumes becomes obvious, while well-lit areas bleed into their surroundings, like watching a high-end home movie," Debruge concludes.

The Hollywood Reporter's Todd McCarthy, meanwhile, acknowledges that Jackson's fastidiousness has created "a purist's delight," albeit not quite a Festivus for the rest-of-us.

McCarthy doesn't doubt that the movie will have the yellow bricks piling up at the box office, but he also writes that "it's as if The Wizard of Oz had taken nearly an hour just to get out of Kansas."

"There might be an appetite for a 'Condensed Director's Cut' in a single normal-length film," he jokes. Both he and Debruge (and pretty much all the other critics) agree, though, that as far as consistency with the look and feel of The Lord of the Rings is concerned, The Hobbit is top-notch.

And Russell Baillie, of the close-to-home New Zealand Herald, calls it "a ripper of a film..

He, too, is of the opinion that An Unexpected Journey starts sloooowly, but he writes that its last hour "just flies by."

"While it's arguable that it's a better film than the previous Tolkien epic starter, The Fellowship of the Ring, it's surely a better theme park ride," Baillie notes, and he was "completely dazzled, in a good way," by the 3-D.

The Playlist's Rodrigo Perez similarly laments the beginning ("slow-going and tepidly genteel") and applauds the ending, "when the action is at its thunderous peak."

The reviews were unanimously favorable, meanwhile, when it came to Martin Freeman as Bilbo and Andy Serkis, back as Gollum.

Even reviewer Garfeimao of rabid fan site The One Ring admitted there are "bits that are a bit confusing and may feel misplaced." But the primed-to-love-it reviewer had only the best things to say about Freeman: "You feel everything he feels."

"At times, the story could maybe have been told a tad faster, but we're talking Peter Jackson here," writes Jule Scherer of Stuff.co.nz.

"When the credits start to roll to Neil Finn's 'Song of the Lonely Mountain,' after nearly three hours, the theatre burst into applause and nobody I talked to complained of sickness or drowsiness after the 48fps experience, but felt perfectly emerged into Middle-earth."

Though it's still technically "coming soon," The Hobbit: An Unexpected Journey's Rotten Tomatoes score currently rests at 75 percent—better than most, but, as yet, it's no Lincoln (90 percent) or Skyfall (92 percent).

So, the moral of this story is: Take your bathroom breaks during the first hour and save the popcorn for the Middle and beyond.

Photos from The Hobbit: An Unexpected Journey

TAGS/ The Hobbit , Peter Jackson , Movies , Top Stories
GET POP CULTURED!
*Email entered incorrectly. Please try again.
By subscribing to our newsletter you agree to the Privacy Policy and Terms of Use
Daily
Weekly