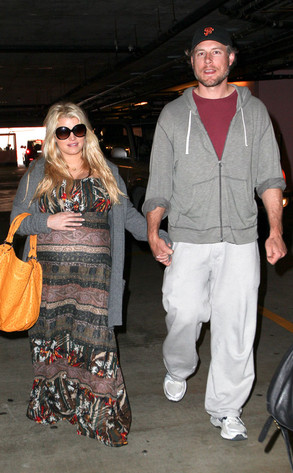 The much-buzzed-about pregnancy news has hit the Web in the wake of the Weight Watchers spokeswoman's spectacular weight loss, and Simpson even debuted her slimmed-down figure less than two weeks ago.

Whether true or false, there's no doubt we're obsessed with baby Maxwell and would love to see a sibling for Jess and fiancé Eric Johnson's bundle of joy.

So let's take a look back at the engaged couple's road-to-babies timeline while the pregnancy rumor mill is still on a roll!

July 2010: Jessica Simpson is spotted celebrating her 30th birthday in Italy with new beau Eric Johnson (the twosome reportedly began dating in May). At the time, Johnson's divorce is not yet finalized and Jessica is still recovering from her breakup with Tony Romo, who dumped the blond beauty just one day before she turned 29.

November 2010: After a whirlwind romance and quick courtship, Simpson and her footballer beau announce they are engaged. The couple shares the wedding news just days after Jessica's ex-husband Nick Lachey and Vanessa Minnillo announce they are also planning to walk down the aisle.

July 2011: The Fashion Star mentor is snapped with what appears to be a baby bump, but the singer's rep shoots down the pregnancy rumors.

Oct. 31, 2011: Jess finally confirms her pregnancy on Twitter and posts an adorable pic of herself dressed up as a mummy for Halloween as she clutches her baby bump. The caption? "It's true—I am going to be a mummy." Too stinking cute!

Nov. 9, 2011: In an exclusive interview with E! News, Simpson reveals that she "wants a lot of kids" and admits that she "could be pregnant forever."

Jessica Simpson is pregnant—see the twitpic!

Jan. 6, 2012: In the course of her much-talked-about pregnancy, Jessica announces that she's adding a maternity line to her fashion empire.

March 7, 2012: A very pregnant Simpson poses nude on the cover of Elle magazine and reveals her little girl will have a "nontraditional name."

March 13, 2012: Jess, who's never had a shortage of TMI 'tude, admits she calls herself "Swamp Ass" because of her giant baby belly. She later tells Jimmy Kimmel that she feels like she has a "bowling ball" sitting on her "hoo-ha" and blames her extra-large bump on her "amniotic fluid."

May 1, 2012: Jessica gives birth (after what feels like forever) to a beautiful baby girl, whom she and Eric name Maxwell Drew Johnson. The first photos of their bundle of joy are sold to People magazine for a cool $850,000.

May 30, 2012: The too-cute pics on the cover of People hit newsstands. Baby Maxwell is just 4 weeks old.

Sept. 5, 2012: The new Weight Watchers spokeswoman talks losing the baby weight and admits her body is not "bouncing back like a supermodel."

Sept. 10, 2012: Jess tells Katie Couric that she and Eric have still not set a wedding date, noting that it "won't be this year" but gushing that "motherhood is a dream."

TAGS/ Jessica Simpson , , Top Stories , Babies , Pregnancies
GET POP CULTURED!
*Email entered incorrectly. Please try again.
By subscribing to our newsletter you agree to the Privacy Policy and Terms of Use
Daily
Weekly