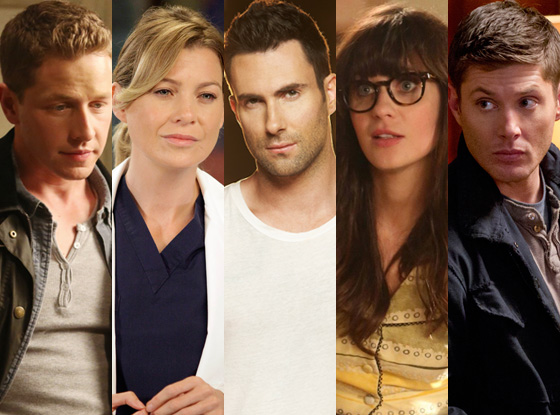 Even though the weather is cooling down, our Fall TV Awards are heating up! Today, we're pitting the days of the week against each other to find out which night offers the best entertainment. Let's take a quick look at each night's best offerings before getting our vote on, shall we? (Sorry, Saturday, you didn't make the cut. It's not us, it's you.)

Monday night's offerings include the final season of Gossip Girl and Dancing With the Stars: All Stars, as well as How I Met Your Mother, 2 Broke Girls and Hawaii Five-0 over on CBS. NBC has a winning formula going with The Voice and freshman standout Revolution, and Bones continues to flourish on Fox.

Tuesday brings the No. 1 show on TV, NCIS (plus NCIS: LA and Vegas!) on CBS, second helpings of DWTS and The Voice, as well as Fox's comedy block, which includes New Girl, Raising Hope and newbies Mindy Project and Ben and Kate. Freshman hits Go On, The New Normal and Parenthood follow The Voice, and the CW prescribes Hart of Dixie and Emily Owens, M.D. FX also proves to be major competition with its hit Sons of Anarchy.

Vote for the fall TV season's most shocking moment so far

Wednesday is all about the comedies for ABC, with Modern Family, Neighbors and Suburgatory in the lineup before Connie Britton's new drama Nashville battles FX's American Horror Story at 10 p.m. The CW is going for the genre fans with its breakout hit Arrow and perennial fan fave Supernatural, and Fox puts on a weekly spectacle with The X Factor. Reality juggernaut Survivor continues to do well for CBS, as do Criminal Minds and CSI.

Thursdays are a bit of a TV bloodbath, with the CW's top performer, The Vampire Diaries, going up against 30 Rock, Up All Night, The Big Bang Theory, Two and a Half Men and The X Factor's results show. And that's just the 8 o'clock hour! At 9 p.m., Glee battles Grey's Anatomy, as well as The Office, Parks and Rec and Person of Interest. Scandal and Elementary bring the dramatic goodness at 10 p.m.

While Friday used to be a TV graveyard, Fox has found success during the night with Fringe, and Grimm has been a solid performer for NBC. CBS does well with new episodes of Undercover Boss, CSI: NY and Blue Bloods, while ABC airs Shark Tank (Malibu Country and Last Man Standing debut soon), and Nikita and America's Next Top Model air on the CW.

Get the latest TV scoop in our Spoiler Chat

Oh, Sunday. Where to begin? Two of ABC's biggest hits, Once Upon a Time and Revenge, tag-team the night, going up against The Amazing Race and The Good Wife on CBS and Fox's Animation Domination (The Simpsons, Bob's Burgers, Family Guy and American Dad!). Oh yeah, and there's also Homeland, Dexter, Boardwalk Empire and The Walking Dead. Yowza!

Remember, the polls close on Monday, Nov. 12, at 5 p.m. PT, so cast your vote now. And make sure to check back tomorrow for yet another new category!

TAGS/ Watch With Kristin , TV , Top Stories , 2012 Fall TV Awards
GET POP CULTURED!
*Email entered incorrectly. Please try again.
By subscribing to our newsletter you agree to the Privacy Policy and Terms of Use
Daily
Weekly