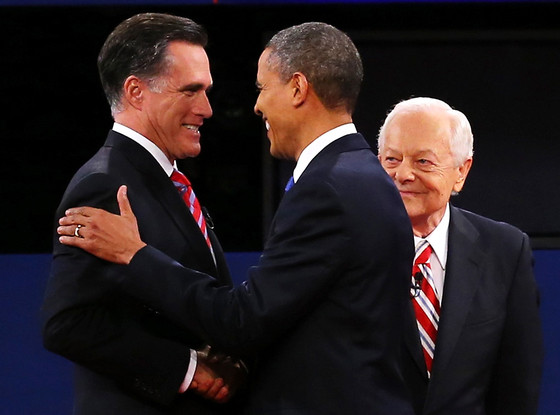 Barack Obama and Mitt Romney threw down the gauntlet one last time tonight—and the Twitterverse was ready.

The politically inclined corner of Hollywood was again hanging on every word of the candidates' third and final debate before the Nov. 6 election, this one devoted to foreign policy and how the sitting president and his challenger plan to lead the United States forward.

Here's what the celebs had to say in 140 characters (or much, much more):

Michelle Obama: Barack's steady leadership has made us stronger and safer than we were four years ago. That was clear tonight. –mo#ProudOfObama

Bill Maher: OK, one last try: We have fewer Andrews Sisters and Ritz Brothers than we did in 1944. So glad we're done with THAT!...Plus: I've seen wider ideological differences between Jehovah's Witnesses...And: First debate, all agreed, Obama lost; second one, i say he won, but Romney not trounced. But this one? Only bubbledwellers can say Mitt won.

Alec Baldwin: Point goes to Mitt that China is a currency manipulator...And: O is cool, collected, Presidential. Mitt is throwing everything at the screen except the Pumpkin Papers.

Here's what the celebs were saying about debate No. 2

Lindsay Lohan: Nice work to both @BarackObama and@mittromney... i'm so relieved that its over. Maybe more than both of you..severe anxiety-God Bless xo L

Samuel L. Jackson: Why do the same A--HOLES continue to follow me in hopes that I'll recognize their pathetic opinions? Oh, wait I just did! Carry on. GOBAMA!!

Giuliana Rancic: I love watching the families chatting on stage after #debate. Wish I could read lips!#whatrtheysaying

Moby: Now listening to jimi hendrix. Perfect antidote to mitt romney the whiney liar. The only thing authentic about mitt romney is his hair.

Miss Obama on The Daily Show?

Michael Moore: Here in Michigan, we retooled our entire state economy so we could export Romney to Massachusetts...Plus: Mitt's 5 PointPlan:1.It's just a jump to the left 2.A step to the right 3.Hands on ur hips 4.Bring ur knees in tight 5.Drive yourself insane

Scott Baio: Fact: During the debate tonight a active duty Marine contacted Fox News to say they still use bayonets.

Chad Johnson: I'm sure the debate is good but there's no way Obama/Romney top last weeks debate... that s--t was f-ing exciting across the board...

will.i.am: Those who aren't watching you should be proud that we have a strong leader in@BarackObama ...we will fight our problems 1by1 together #vote

Christina Applegate: no secret that I am one of them hippie dippie liberal types. It's just my core belief. But I'm not going to say who to vote for just vote!

Kelly Bensimon: Americans are strong leaders. Who is going to be our commander in chief? I'm pro american not pro debate team. Make the right choice