Final Presidential Debate: Most Memorable Moments of Obama vs. Romney in Florida 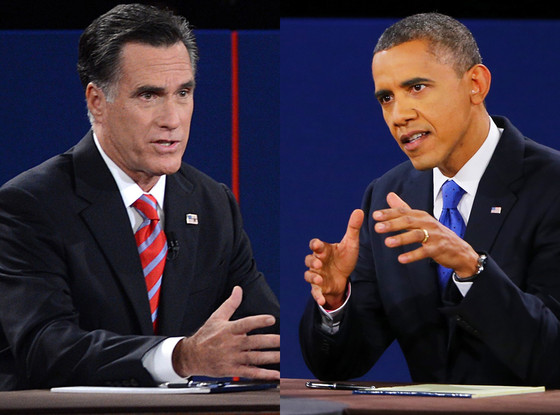 A two-hour debate about foreign policy encompassing a number of grim talking points isn't exactly breeding ground for quips, humor and turns of phrase that are rife with viral potential.

But Mitt Romney and President Barack Obama did their best tonight as they traded jabs at Lynn University in Boca Raton, Fla., during the last of the presidential debates, the final time these two are scheduled to meet before the Nov. 6 election.

Here are some of the most memorable moments from the third debate, from Romney sort-of congratulating Obama on getting Osama bin Laden to Obama regaling Romney with tales of horses and bayonets:

Best Shout-Out to Himself: "Libya was attacked by, I think we know now, by terrorists of some kind," Romney said, seemingly continuing to insist that Obama was lagging on labeling the attack on the U.S. mission in Libya an act of terror—a point made moot when CNN's Candy Crowley backed up Obama during the second debate with a recall of what he said right after the attack.

President Rambo: "I congratulate him for taking out Osama bin Laden, but we can't kill our way out of this mess," Romney said, painting an important distinction between himself and Barack "Die-Hard" Obama.

George Clooney supports Obama, but wants to make life miserable for the president of Sudan

Magic Number: "We're the great nation that has allies—42 allies and friends around the world," Romney said, as scholars pulled out the Risk boards.

Recent-History Lesson: "Russia, I indicated, is a geopolitical foe, and I said in the same paragraph," Romney clarified, "that Iran is the greatest national security threat we face...I'm not going to wear rose-colored glasses when it comes to Mr. [Vladimir Putin]."

Obama on The Daily Show: Serious with a side of Joe Biden in swimwear

You Sunk My Argument: Noting Romney's past criticism that the U.S. Navy doesn't have as big a fleet as it used to, Obama said, "We also have fewer horses and bayonets because the nature of our military has changed. We have something called aircraft carriers, where planes land on them. We also have ships that go underwater, nuclear submarines. So the question is not a game of Battleship, or counting ships, it's what are our capabilities?" (As it happened, mentions of "battleships," "horses" and "bayonets" spiked by 74,500 percent, 69,000 percent and  500,000 percent respectively by the debate's end, according to stats from Facebook.)

U-Boasts: Romney says there are "10,000 centrifuges spinning uranium" in Iran right now and that the world is "four years closer to a nuclear Iran."

FYI: "You haven't been in a position to execute foreign policy," Obama patiently told Romney, "but every time you've offered an opinion, you've been wrong."

Chinese Repeat Torture: Schieffer was the one who brought up Romney's vow to label China a "currency manipulator" on day one of a Romney presidency. Romney recalled a case of counterfeit valves, complete with U.S. serial numbers, being produced in China and sold around the world. "China can be our partner, but that doesn't mean they can roll all over us," he asserted.

Recent-History Lesson, Part 2: "You're familiar with shipping jobs overseas because you invested in companies that shipped jobs overseas," Obama jabbed at Romney.

The Medium Is the Message: "Governor, you keep on trying to airbrush history," Obama said regarding Romney's opposition to bailing out the auto industry. "You were very clear that would not provide government assistance to the U.S. auto companies even if they went to bankruptcy."

Best & worst of the townhall-style debate at Hofstra University

Well, I Never! "That's the height of silliness!" Romney said of accusations that he was a proponent of liquidating the failing automakers that instead received government bailouts.

Best "That's All, Folks": "I think we all love teachers," Schieffer said, snatching the debate out of the jaws of the embattled candidates before launching into closing statements.

Most Adorable Closing Words: "I leave you with the words of my mom: 'Go vote,'" Schieffer offered. '"It makes you feel big and strong.'"