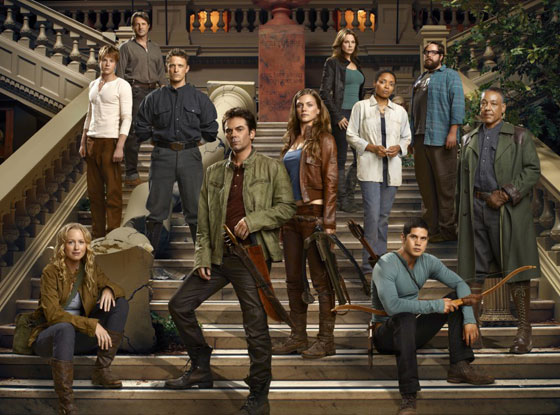 Yeah, we're pretty sure those three names alone make NBC's Revolution one of the most highly anticipated new shows of the season.

If the creator of Supernatural, the mastermind behind Lost, Felicity and Fringe, and the director of Iron Man aren't enough to draw you in (but come on, they should be!), then the premise certainly should do the trick: What would happen if all technology suddenly just stopped working?

Want more of our reviews? Check out our 2012 Fall TV Preview section!

The first word that comes to mind about Revolution? Amibitious. We know post-apocalyptic futures are all the rage right now (Thanks, The Hunger Games!), but we like the unique twist Revolution puts on the drama, which is basically reverting people back to a time before technology, where warlords rule and militias rise.

The series centers on Charlie Matheson (Spiridakos), who (spoiler alert!) after the death of her father, takes off on a journey to find her brother Danny (Rogers), who was taken by militia leader Captain Neville (an awesomely evil Esposito). Why? Because her father knew something about the whole blackout (flashbacks are so handy!)…and possibly a way to turn it all back on.

Charlie seeks help in the form of her mysterious uncle Miles, played by a truly badass Burke, who steals the hour with his gruff attitude and (So long, Charlie Swan!) killer fighting skills. Revolution totally wins the best action sequence in a pilot award, so there's that.

Revolution makes a smart move in replacing Andrea Roth with Lost alum Mitchell (aka She Who Can Do No Wrong) as Charlie and Danny's mother, while Pardo makes a lasting impression as the bad and arrow-totin' hottie who makes moon eyes at Charlie.

While the show takes on a pretty big beast of a premise, we like that Kripke kept it relatable by focusing on a broken family and the complicated dynamics within it. Charlie is kind of a female version of Supernatural's Dean Winchester, though we hope to see more of a spark from Spiridakos going forward in the series.

Alas, with any serialized drama, the concern is always whether or not audiences are going to stick around when they don't receive the answers right away. Just look at FlashForward, The Event, etc. Here's hoping Revolution can find the perfect balance between family drama and mysteries to placate viewers.

Verdict: With a strong lead-in (The Voice), we think Revolution's future looks bright.

All the TV scoop you need in our Spoiler-rama gallery!

TAGS/ TV , Top Stories , 2012 Fall TV Preview
GET POP CULTURED!
*Email entered incorrectly. Please try again.
By subscribing to our newsletter you agree to the Privacy Policy and Terms of Use
Daily
Weekly