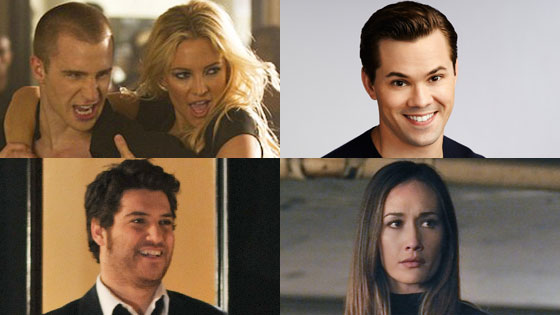 It's right around the corner. Just up ahead. You can almost see it on the horizon. Fall TV season is upon us and we are doing all we can to not vomit in excitement!

Now, we love TV in the summer time. Reality shows that star someone named Honey Boo Boo, Joe Manganiello abs….what's not to love? But September's arrival means that our favorite sitcoms, dramas and dramadies are returning with new episodes! Why are we so gosh darn over the moon for the return of Fall TV? Let us count the ways:

50. New Happy Endings GIFs on Tumblr: Each episode is like an endless GIF-supplying machine, and it's a Tumblr addiction we can't get over. After all, they have to top this one from season two.

Get "sexy" exclusive scoop from the set of Glee!

49. New Normal's Andrew Rannells: Watching The New Normal every week will be like watching an Emmy-winning star being born again and again. He is perfection.

48. Kate Hudson on Glee: After How To Lose a Guy in 10 Days, you'd be hard pressed to find someone who doesn't love her. Welcome to Glee, you foxy lady. Show us what you got!

47. Ron Swanson: If Parks and Recreation can do an entire episode where Ron Swanson is drunk the entire time, we'd be eternally grateful. If not, we're OK with that, as long as we get more Swanson in our weekly diets.

What does the Teen Wolf boss have to say about fans who want Derek and Stiles together?

46. American Horror Story Anticipation: It was a 19-second video, but the first promo from AHS: Aslyum scared us more in that time frame than the Leprechaun series did with six movies. We cannot wait to see what crazy shenanigans Ryan Murphy and Co. come up with this season.

45. Maggie Q's Ass-Kicking: Thank the TV gods that Nikita was renewed, because its star Maggie Q is one of the most beautifully hardcore woman on the small screen right now. She kicks dude's ass on a weekly basis so we don't have to! (Although sometimes we'd like to do that ourselves).

44. CSI: Sometimes we just want to sit back and get sucked into the old standby: a CBS procedural. CSI is a beloved classic (is that the right word?), and since Law & Order was cancelled (still heartbroken), this original will have to take its place for the time being.

43. Musical Episodes: Seems everyone still has Glee fever, so we're anxious to see what other shows will break down and do an entire musical episode. Cougar Town? The Good Wife? Personally, we'd give an arm and a leg to see Supernatural's Jensen Ackles bust a move in the middle of hunting demons.

42. Shippers: Stay crazy, you shipping TV fans. We adore you because we never know which non-couple you'll push together next.

41. Billy Burke as a Dreamboat: Seriously! His turn as a badass "bartender" in NBC's Revolution will leave you swooning, drooling, or a combination of the two. What are kids saying today? Officer Swan, welcome to sexy town, population you. And we are the mayor. Or something like that. Whatever, you're hot and we love you.

The Voice returns with season three in less than a month, and we've got the first look!

Check back all week for more reasons why we cannot wait for Fall TV to come back!

TAGS/ Watch With Kristin , Top Stories
GET POP CULTURED!
*Email entered incorrectly. Please try again.
By subscribing to our newsletter you agree to the Privacy Policy and Terms of Use
Daily
Weekly