The Bachelorette Finale: Engagement! Heartbreak! Spoilers! Everything Else We Learned 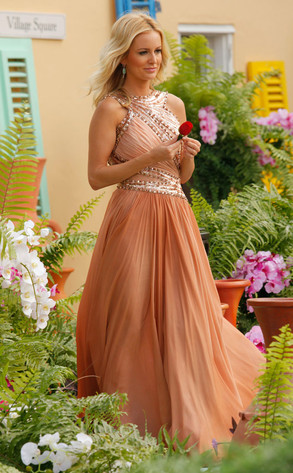 Roses are red, violets are blue, there are two men left (and one rose), so whom will Emily Maynard choose?

You may think you know, but really you have no idea...

READ: The Bachelorette Recap: And the Last Two Men Standing Are...

Have you been strong enough to resist believing the rumored winner via recently leaked reportage? While we all love a little gossip, we refuse to believe it till we see it when it comes to The Bachelorette.

By now Emily has brushed past the proverbial thorns and is ready to present the final rose. Except not really, because she is in love with two men at the same time!

Not only does she have to pick the right man for herself, but also for her daughter Ricki.

Her parents and Ricki meet her in Curacao to help her make the right decision. Jef comes to meet them first.

Jef says to Emily's father, "I wouldn't feel right taking the next steps toward Emily and I being together if I didn't have your seal of approval, too…I definitely want to have your blessing before asking Emily to marry me at the end of this." Her pops happily gives him the seal of approval.

Her brother is skeptical of Arie at first, but they connected over caring for children. However, he gave her family a box full of the roses that he received each week from Emily as a symbol of their relationship. Arie also asks Emily's dad for her hand in marriage. Pops says "yes" to Arie, too!

MORE: Bachelorette Scoop: Is Emily Maynard "Dissing" Chris Harrison? And Who's a Diva?

Thanks for the help, dad. Not. Then her mom steps in and advises her to not accept any engagements right away until she is absolutely sure of her feelings.

Initially, Emily was not planning on introducing her daughter to the suitors, but after Jef and she had a heart-to-heart on the beach she suddenly changed her mind.

He was so ready to meet Ricki that he jumped in feet first. Literally. The three of them played in the pool, and then set a hermit crab free into the sandy beaches.

Although things went swimmingly with Jef over the past few days, it seems Emily feels more lost than ever. She meets with Chris Harrison to get some advice. However, she reveals that she feels more strongly for one of the men, so Chris tells her, "Be as honest with him as you are being with me."

On her date with Arie, he anoints her with a love potion he made for her, and then she breaks into tears. Maybe he forgot to add the love.

In a shocking twist, Emily breaks up with Arie right then and there. You could actually hear his heart break pounding when she hugs him goodbye because her microphone hits his chest.

Meanwhile we see Jef picking out an engagement ring with the one and only Neil Lane. Do you think she will end up accepting his proposal?

With a perfect ring picked out and an even more perfect romantic moment complete with an '80s song montage. She said yes!

But wait, there's more! More secrets are being revealed on a live episode of After the Final Rose.

Chris sits down with Emily, and without hesitation they bring Arie out to reunite with Emily for the first time. For not getting any closure, he talks very positively about the experience. She apologizes again for not fully communicating her true feelings at the time.

Arie confesses that he could not go out in public and be himself after the show ended. He was so heartbroken that he flew out to North Carolina to talk with Emily. He simply left his journal on her doorstep that he wrote during the show.

Although she did not read it out of respect, she expresses that she admires his open heart and genuine love for giving her such a romantic gift. He wishes she would have been more honest with her, but his friendship with Jef helped him move on and still be happy for the couple.

RELATED: The Bachelorette Recap: Who Does Emily Maynard Tell to "Get the [Bleep] Out"?

When Jef comes out, all he can do is gush about how much he loves Emily and Ricki. All together now, "Awww."

So what's next for the ridiculously attractive couple? First stop: A humanitarian trip to Africa to build water wells. As for where they will build their lives together as they prepare for their wedding? (Yes, the wedding is actually happening.) They will settle down in North Carolina so that Ricki can stay at her current school.

Do you think Emily made the right choice? Engage in discussion in the comments!

TAGS/ Top Stories , The Bachelorette , The Bachelor , Recaps , Watch With Kristin , Emily Maynard
GET POP CULTURED!
*Email entered incorrectly. Please try again.
By subscribing to our newsletter you agree to the Privacy Policy and Terms of Use
Daily
Weekly