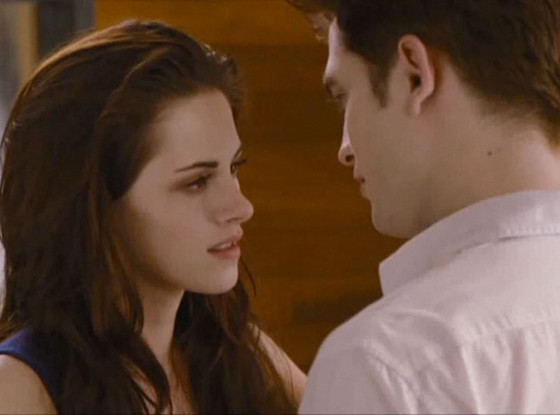 Talk about your immortal beloveds.

The cast of The Twilight Saga: Breaking Dawn Part 2 couldn't have done anything—besides not show up, of course—to disappoint the 6,500-capacity crowd today in hallowed Hall H at Comic-Con 2012.

Author Stephenie Meyer, Robert Pattinson, Kristen Stewart, Taylor Lautner, Kellan Lutz, Nikki Reed, Ashley Greene, Peter Facinelli, Elizabeth Reaser and, for the first time, 11-year-old Mackenzie Foy got a rock-star reception, and it was a picnic from there as they started spilling secrets about, gulp, the final cinematic installment of the Twilight series. (Well, the final Twilight starring these folks, anyway.)

Who cried? Who used the loathed word "bittersweet"? Who lost a tooth? And what does Edward in Breaking Dawn Part 2 have to say to the slightly less ancient Edward from Twilight?

MORE: Twilight and Comic-Con: A Look Back Before the Last Fling

"Keep it in your pants," was what Patterson came up with when a fan asked what he felt his character had learned over the years, from lusting after Bella to finally getting to share temperatures with his soul-if-they-had-them-mate.

Since Breaking Dawn 2 is the final film based on a book that we'll bet 90 percent of Hall H devoured like vampire Bella eating a mountain lion, there wasn't much "scoop." But it was a time for reflection, both emotional and humorous.

Every castmember on the panel agreed on one thing—it was really too hard to pinpoint one moment making the saga that was their "favorite" or "most memorable." "They all kind of blur together," Facinelli admitted.

When asked about specific scenes, however, there were a few preferences.

"I loved the hunt," said Stewart, who's been talking since last year's Comic-Con about how psyched she was to finally play a vampire.

"It felt so good to break [vampire Bella] in," she said, "to see how fast the car goes." (Pretty darn fast, judging by the first seven minutes of the movie the fans were treated to today. Let's just say, Edward and Bella's first vampire embrace is superhot—and then superfunny when Edward finds out just how superhumanly strong his wife is.)

Stewart and Lautner also dug the scene where Jacob reveals to Bella that he has imprinted Renesmee.

"I was sorry after that day," Lautner laughed, an indicator of mama-Bella's strong reaction to the news.

But perhaps our favorite recollection of a memory came from Foy, who was obviously enjoying her first Comic-Con.

"Riding Jacob-wolf, that was fun! I lost a tooth!" she recalled.

We would have guessed the kid had chops, but she proved it right there!

Reed was the one who got misty-eyed, saying, "I'm really sensitive right now that it's coming to end." (Lutz got a laugh out of her a second later by saying that "finally kissing [his] wife" was definitely a highlight for him.

"I never want to hear the word again," Kristen said, haltingly, when asked how it felt now that the journey is finally over, "but...bittersweet?"