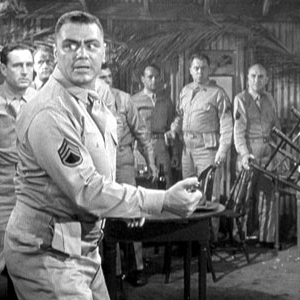 Ernest Borgnine did it all: won an Oscar; killed Frank Sinatra; fought evil in Bikini Bottom; notched one of Hollywood's all-time shortest marriages.

READ: Andy Griffith: Heart Attack Cited as Cause of Death

"It's a very sad day," Borgnine's manager Lynda Bensky told us. "The industry has lost someone great, the caliber of which we will never see again. A true icon. But more importantly the world has lost a sage and loving man who taught us all how to 'grow young'. His infectious smile and chuckle made the world a happier place."

The TV and film star died at about 1:30 p.m. at Cedars-Sinai Hospital surrounded by family members.

His publicist Harry Flynn told the Los Angeles Times that Borgnine went in for a routine checkup on Tuesday—his "95,000-mile checkup," as the actor called it—and it "turned out to be a little more serious than we thought."

"There are millions of those in the world who would love to be in our shoes," the 94-year-old Borgnine said as he accepted the Screen Actors Guild's lifetime achievement award in 2011.

Only a few years into a film career that didn't begin until when he was in his 30s, Borgnine won the 1955 Best Actor Academy Award for Marty, a character piece about a sad-sack butcher.

In the military melodrama From Here to Eternity, Borgnine's breakthrough film, he bullied and brutalized a skinny Sinatra —and, in the process, earned a reputation.

"I did a U-turn on Ventura Boulevard, and I suddenly got stopped by the cops," Borgnine once recalled for the Huffington Post. "And when he saw my card, he said, 'Whoa. I've got the son of a bitch that killed Frank Sinatra.'" 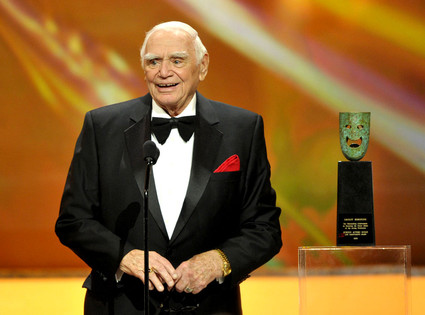 TV viewers were on friendlier terms with Borgnine —he starred as the good-hearted leader of the 1960s crew McHale's Navy, fought bad guys on the 1980s action show Airwolf, and, later, was the voice of the square-jawed Mermaid Man on SpongeBob SquarePants.

Borgnine had his brush with tabloid fame in 1964 when his marriage to Broadway musical star Ethel Merman lasted all of 38 days.

"Mr. Borgnine said he did not intend to change his mode of living, and if I didn't like it, I could lump it," Merman testified in divorce court.

Borgnine later settled into one of Hollywood's longer-running marriages, with his union to fifth wife Tova Traesnaes enduring from 1973 until his death.

In 2006, Borgnine came under criticism when he said he hadn't seen Best Picture nominee Brokeback Mountain, didn't want to see the tragic cowboy love story, and that "if John Wayne were alive, he'd be rolling over in his grave."

Speaking to National Public Radio four years later, Borgnine said, "To each his own"—but noted that he still didn't want to see Brokeback.

Borgnine didn't stand for talk of retirement. In 2007, at age 90, he became the oldest Golden Globes nominee ever.

TAGS/ Death , Top Stories ,
GET POP CULTURED!
*Email entered incorrectly. Please try again.
By subscribing to our newsletter you agree to the Privacy Policy and Terms of Use
Daily
Weekly